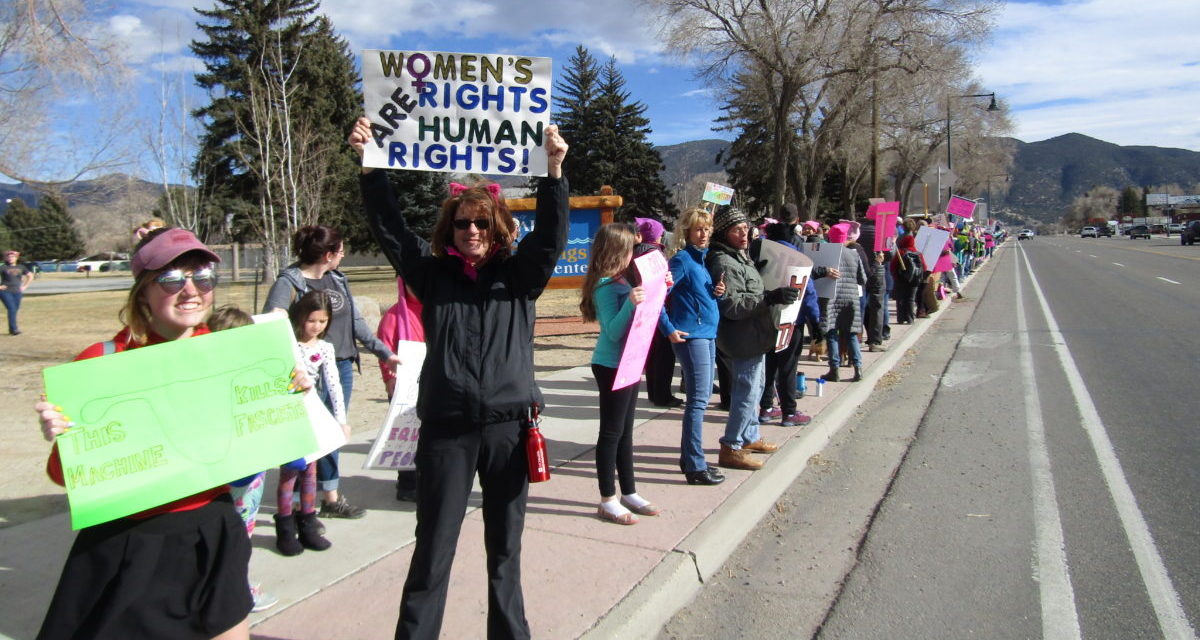 “We the people” was on full display last month when residents of Chaffee, Saguache, Lake and Fremont counties came together in Salida.

Chants of “This is what democracy looks like” and “We believe in building bridges, not walls,” echoed across U.S. Highway 50 on Jan. 19 as marchers waved signs asking motorists to “honk if you support women.” The march garnered honks and waves from large numbers of cars passing the Salida Hot Springs Aquatic Center.

The Chaffee County version of the Women’s Marches that occurred all across the country that Saturday drew a cheerful local crowd of around 450 people. The crowd represented all ages and genders: multi-generational families, grandparents pushing strollers, young professionals, parents and dancing children, some coming from as far away as Leadville and the Front Range. They waved signs, waved at passers-by and compared their ubiquitous pink hats. The hats became a symbol of the women’s march that occurred the day after the 2017 presidential inauguration.

After an hour in front of the aquatic center, the demonstrators marched east to Soulcraft Brewing, where activists had set up voter registration information, party candidate information and NARAL Pro-Choice tables. Kids’ craft and game areas were immediately swamped by children.

“I’m here because we need to stand up for freedom for all people, all religions, to express their beliefs and not be attacked,” said Joyce Machata. Sign-carrying marchers Trish Cullinan, Jane Carpenter and Virginia Irving stood nearby.

The march celebrated one year since the largest single-day demonstration in U.S. history, which, not coincidentally, took place the day after the 2017 presidential inauguration. While Women’s March participants stood along the north side of U.S. 50, a group of eight to 10 demonstrators carried signs supporting anti-abortion and right-to-life issues on the south side of the highway.

A survey of Women’s March activists revealed they that each participated for their own reasons, made apparent by the signs they waved. These included support for a variety of issues, including women’s reproductive rights, gender equality, the “Me Too” movement, equal pay, gay rights, immigration reform, support for the Dreamers (immigrants brought to the U.S. illegally as children) and general civility in dealing with the county’s – and the country’s – issues.

“My father and grandfather immigrated here from Czechoslovakia. We’re all immigrants,” said Kathy Taylor, who expressed excitement at being able to attend a march in a rural area. “Our country was built by immigrants. Why can’t these people who are so afraid of them realize they are just like the immigrants in our own families who came here hoping for a chance?”

While the plethora of issues marching under the Women’s March banner has been criticized by conservatives, marchers say there is a reason they have come together.

Organization of this year’s march, billed as a no-partisan event, was spearheaded by Salida resident Shelley Schreiner.

“I had a lot of help from Lindsey Smith, Farrah Fine, Mark Monroe and Jimmy Sellars. People wanted to do something in Salida to show that, even in rural areas, we care about these issues.”