The Chaffee Board of County Commissioners (BoCC) approved the Timber Creek Ranch Conservation Subdivision sketch plan last week, but not without significant community objections to the proposed development across a broad swath of topics. Those concerns ranged from density, traffic load, light pollution, and obstructed sightlines, to impacts on the water table and water quality from another 68 wells and septic systems on a 78-acre area.

A key question, framed by one concerned area resident; “Can water be supplied on 68 lots within 78 acres without causing injury to other well holders? Can the aquifer be maintained?

The proposal is to subdivide Parcel 6, Timber Creek Ranch of approximately 184 acres into 68 lots clustered into only a portion of the parcel, with the minimum being 0.92 acres. This parcel proposed for this level of density would be balanced against one additional outlot of 181 acres to be preserved in perpetuity as contiguous open space.

The motion by Commissioner Rusty Granzella referenced that the sketch plan approval is directly tied to the dozen or so conditions outlined by the Chaffee County Planning Commission.

More issues were raised: how to memorialize the open space in perpetuity, so it doesn’t disappear with the next proposed development. The safety hazards proposed by selling lots in the direct airport approach flight path and how to memorize the water rights to tie them to the land.

Commissioners stressed that at the early sketch plan phase, while many of the questions raised in public comment are valid, the answers lie in the stages that are still to come and these aren’t available yet.

More issues were raised, with nearby resident Jack Wolf asking that no more than 54 lots be developed, as well as attention be given to adding at least three-foot wide bike/walking lanes between the area and Salida city limits. Developer Walt Harder has not yet agreed to any trail easement.

Another nearby landowner offered up an alternative sketch plan, where the cluster of homes be positioned on the northwest portion of the property, allowing for an open space area between the new development and the existing Longhorn Ranch. 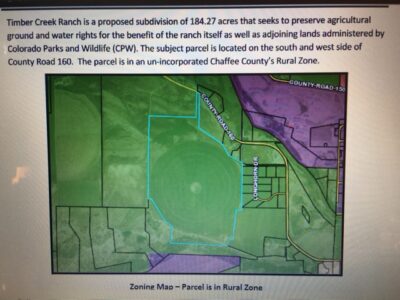 Wendy Wolf asked that the developer consider a buffer between this new development – which directly abuts the existing Longhorn Ranch, as well as considering Yuniker Drive (called Longhorn Drive on the sketch plan) as an emergency exit to the Timber Creek development, not a main entrance and exit. The BoCC agreed, making the decision that day so that it could be included in the required traffic analysis.

Several in the audience raised the Salida Airport overlay district and worried about the safety of the 11 lots and homes that would be in this approach path.

Commissioner Keith Baker commented that not just safety, but mounting complaints about airport noise has happened in other communities where people buy lots near airports, even though notified of their proximity and accepting the risk, that over time begin to complain.

“They’ve shut down airports in other areas,” said Baker. “I’m seeing the other side, people will move in, buy an existing home next to an airport, and then soon a movement starts to close down the airport – although they built with full knowledge there was an airport there. We just went through the overlay process, we’ve got FAA coordination and approval on what we’ve got. I’ve seen airports get closed down. I don’t want to hazard the airport.”

Staff recommended a variance to the current LUC two-acre requirement for the airport overlay district — all new developments in the area should have a minimum of two acres, and a plat note will record the proximity to the airport – because the lots are next to the large open space.

Concerns were raised over visual impacts. Several Longhorn Ranch property owners, who had backed up to open space and picked their lots for their long-range views toward the Saguache Range were upset that the developer would not just be allowed to ignore the two-acre minimum lot size, but would cluster his new homes directly against their lot lines than announce that he would “sell them” the air space over homes on those lots so they wouldn’t lose their view.”

“All the septic systems and wells will be monitored by the homeowners association (HOA),” said Harder. “There’s more than 60 acres in that area that could have been developed — but there are only 11 lots, grouped to the furthest north of the flight path. We call it a sensible approach to air space. We will develop some method of selling height restrictions on some of the lots….

“Just so I understand, said Granzella, “You’re selling the air space – if they build a one-story house not a two-story house?”

“Yes. Initially, it will be me and we negotiate a deal for height and price,” said Harder. “That will remains with the lot for whoever buys it.”

Harder explained the topography; saying the highest point of the entire parcel is the southeast corner and the lowest point is the northeast corner, so by selecting the area for the housing it preserves the view for everyone as the terrain climbs toward the southwest. “We would eliminate dotting that with houses…. that’s why we arrived at the configuration we did.”

“So when you sell those lots, we need a Right-to-Ranch acknowledgment for that open space, for cows, mowing, and agricultural operations, right?” asked Baker.

Asked about dogs on the open space parcel Harder said “We’ll keep dogs offsite; they chase cows. The plat note goes on every plat, our expectations of owners, and their access to the open space … We’re buying a new [irrigation] pivot and expect overall hay production to be greater than now….we’ve been working with Colorado Parks and Wildlife (CPW) for the last two years of the redivision of water rights to get it back into hay production.”

The staff assessment acknowledged that this development will change the character of the agricultural setting. “Any development in this area will change the untouched character of the area,” said Planner Greg Laudenslager. “It does conserve numerous agricultural areas and meets the Land Use Code. This conservation subdivision balances growth with conservation and protection of the area. Staff recommends approval with conditions. On March 1, 2022, the Planning Commission voted 6-0 to approve with conditions to the BoCC.”

There were 12 development guidelines from the Chaffee Planning Commission, and the BoCC agreed with all of them. Among the biggest concerns are concerns over water and water rights. The agricultural water will remain tied to the land. The developer has agreed to look at the possibility of shared wells and septic systems, which could potentially be maintained and managed by the HOA that will be set up.

The BoCC noted that Harder also owns nearby parcels four and five (which are also apparently planned for development), but that these don’t appear to be part of the proposal, nor does their acreage figure into the density averages that have been presented.