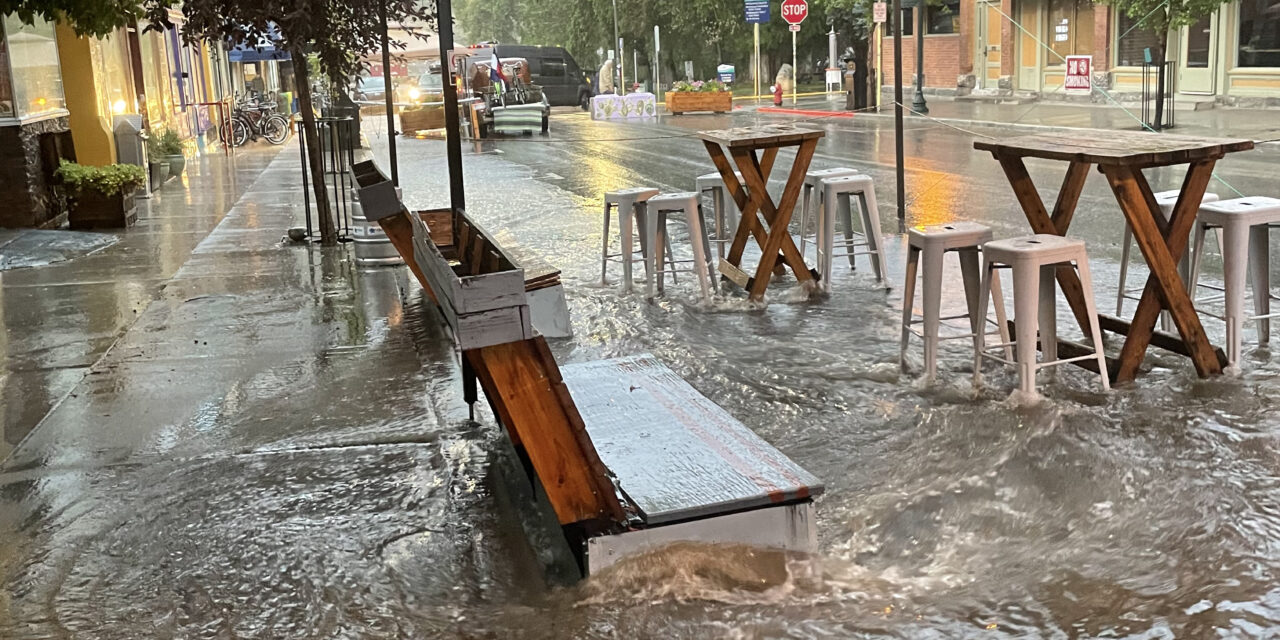 Those caught in the July 1 rainstorm said it was like weeks of monsoon rains — that came all at once.

Thursday evening’s deluge gave the entire county some much-needed moisture — but it flooded Salida’s main streets several inches deep in places, as the storm sewers couldn’t keep up. Tourists and visitors in downtown Salida scrambled to find shelter from the continuing downpour that began there just before 7:00 p.m., as the slow-moving front hung over the Arkansas River Valley.

The National Weather Service issued flood warnings throughout the area from late afternoon onward. As of 1:00 p.m. Friday, it again issued flood warnings across the Chaffee County area until at least 4:00 p.m. MST. They included the message that the storms have the potential for dangerous and life-threatening  situations to develop.. 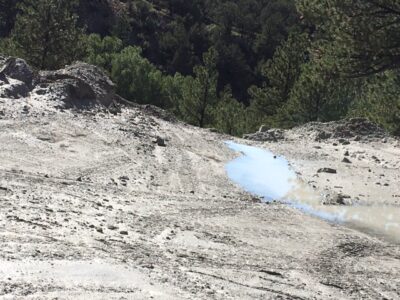 When storms stall over the Chalk Cliffs, the infamous dip, in Chalk Creek Canyon flows with debris that closes CR 162. Photo by Jan Wondra.

The storm caused the infamous Chalk Creek Canyon “dip” to flow, closing CR 162  and routing residents and camping visitors to the canyon onto the gravelled back route south of Mt. Princeton Hot Springs, where the downpour had flooded parts of that county road as well.

As usual, quick work by the county’s Road and Bridge Dept. after the storm passed got the road reopened, with earthmovers at work on the debris flow by 10:15 p.m.

Chaffee County quickly moved from immediate concerns over agricultural ditch water shortages and drought to flooding concerns, especially in the burn scar areas left by the Decker Fire and the Hayden Pass Fire.

While residents of Buena Vista reported much lower rain amounts, more than two inches fell in the Chalk Creek Canyon, with estimates of three to four inches in the southern half of the county.

Muddy torrents are shown above, coursing through the CR 111 flood diversion ditch in Salida.  Earlier flows washed over the banks, as evidenced by the pooled waters on either side.  Video courtesy of area resident Maureen Parsons.

In other parts of the south end of the county, localized flash floods occurred on the north side of Methodist Mountain. Most flood controls worked but there is damage reported between CR 110-111.

Flooding also appears to have happened up and downstream along the South Arkansas (unconfirmed at press time), which has had little water the past few days. Area resident Ed Cooper said, “We were told to shelter in place last night as the county had equipment out moving mud and was checking bridges.”

Cooper added that in his opinion, the flood system was overwhelmed at the CR 111 bridge.  Cleanup efforts today included excavators and chainsaws. 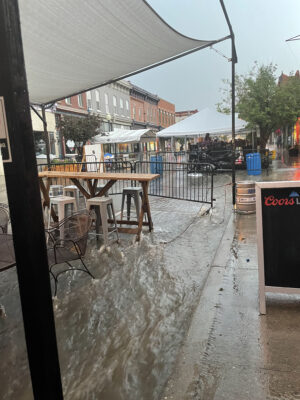 Chaffee residents may recall that in 2012, a broader flank of Methodist was hit by a major flood and it took out a number of roads and bridges as well as silting in flood diversion ponds and agricultural ditches.

“Since that time, hundreds of homes and businesses have been built around the county in areas that are flood-prone but not in official flood zones.” Cooper added.

“The White Ditch that splits my property overflowed last night as did the huge flood channel that you cross as you approach the house. The good news is the water went where it was supposed to around me… but it will take some time for the neighborhood to assess damage,” said Cooper.

Residents of the Central Colorado Rockies know that what is called the “summer monsoon flow”  is what we depend upon for summer moisture. The storm clouds that boil up over the Sawatch and Sangre de Cristo mountain ranges in mid-afternoon often bring short-lived showers, clearing again in time for evening barbeques.

Last year that monsoon flow was interrupted, and the valley was under fire restrictions much of the summer, as Colorado experienced its worst fire season on record.

While one torrential monsoon event does not a season make, it remains to be seen if similar violent storms may be in the weather pattern, or if the normal mild monsoon events will return. And, while forest fires are top of mind these days, we are reminded that flash flooding is also highly likely, especially given previous fire burn damage.

Featured image: F St. in Salida, just before the height of the storm, was already deep in water. Photo by Brooke Gilmore.