The 243rd birthday of this county was celebrated in Salida about as traditionally as it gets – with crowds in the park, music, food, patriotic themes, speeches, family gatherings, a small-town style parade and more, culminating with the fireworks display from Tenderfoot Mountain. 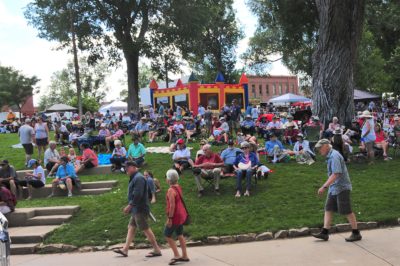 The day opened with a Kids Fishing Derby at Frantz Lake, sponsored by Colorado Parks and Wildlife and the Collegiate Peaks Chapter of Trout Unlimited, with prizes for categories of fish caught and a free hot dog lunch for the contestants afterward.

One highlight was the morning dedication of the Chaffee County Veterans Memorial Park at the Poncha Springs Welcome Center with representatives of several local service branches including the American Legion, Veterans of Foreign Wars and Marine Corps League. 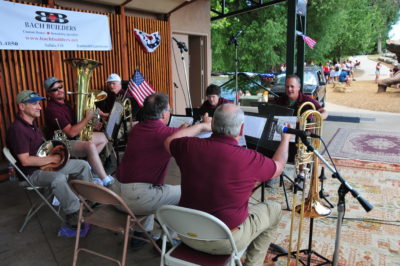 The Salida Brass brought a traditional 4th of July flavor to the Riverside Park celebration, playing patriotic tunes from the amphitheater stage.

The memorial park is the first phase of reconstruction of the area. The original monument was removed for improvements at the Welcome Center.

At Riverside Park, food vendors and performances by the Salida Circus opened the festivities. Residents were treated to music from the Ark Valley Freedom Singers,  and the Salida Brass playing traditional patriotic tunes from the Rotary Club Amphitheater.

One attendee said ‘There’s nothing like music from a brass band on the 4th of July.” The audience mostly gathered in the shade of the park’s trees, and out of the sun in front of the bandstand, seemed appreciative of the music. 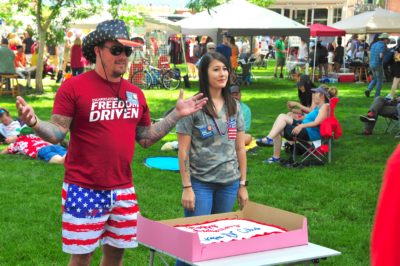 Among the crowd at the Salida Fourth of July event at Riverside Park were Xscapers RV Club president Travis Carr and wife Melanie, who is vice president. They presided over a cake celebration for the club’s 41st anniversary.

One unique celebration at the park involved dozens of Salida visitors, all members of the Xscaspers RV Club, gathered at the Chaffee County Fairgrounds for one of their ‘convergences’ held around the country.

As an Escapers crowd gathered around, president Travis Carr, and his wife Melanie, who is vice president, brought out a large sheet cake to make the anniversary of the founding of the club, known then as the Escapees RV club, established 41 years ago. The two were co-founders. 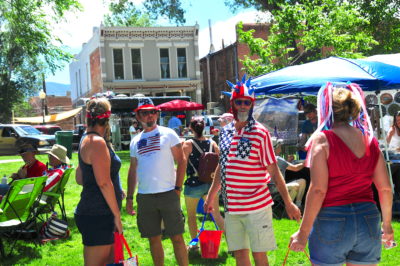 A varied and colorful fireworks display, with funding help from the community, by the Salida Fire Department from Tenderfoot Mountain capped off the holiday activities.