The renewal, application, or transfer of a liquor license doesn’t normally get much attention in Chaffee County. During the regular City Council meeting on November 17, a public hearing was held to review the transfer of a hotel and restaurant liquor license from Quincy’s to the Santa Fe Bar and Grill located at 710 Milford Street in Salida. The council declined to transfer the license and the applicant did not attend.

The Santa Fe Bar and Grill opened in August.

The applicant’s representative was notified of the public hearing multiple times over the past months via phone call, certified mail to three addresses and posted on the front door of the restaurant. The applicant did not show up for the hearing, nor attend via GoToMeeting. which surprised many council members.

The preliminary investigation reports were given by Salida City Attorney Nina Williams. When transferring a license, the city investigates the person applying for the license. Fingerprints are sent to the Colorado Bureau of investigation where in this case, it was discovered that this lone member of the LLC had convictions including felony assault, real menacing with weapon, felony burglary, misdemeanor property damage, criminal mischief, reckless endangerment, driving under the influence as well as selling or serving alcohol to a minor. 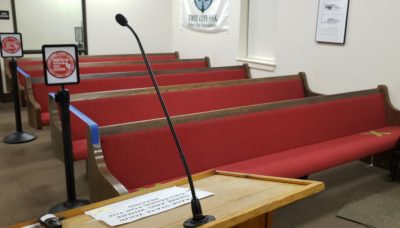 The Salida Police Department also did a background check which showed the same results along with more convictions. When applying for this type of license, where criminal convictions that are relevant are found, the city is still bound to follow due process, including hold a public hearing; hearing all the evidence, and allow the applicant a rebuttal on the claims.

Salida Police Chief Russ Johnson also reviewed the criminal history of the applicant and recommended that council decline the license. Councilperson Harold Kasper said “after all we’ve heard and looking at the fact the applicant is not present, I do not think we have any other choice but to deny the application.

Councilperson Jane Templeton agreed saying “I think it’s unfortunate that the applicant did not come. I was expecting him to be here tonight to maybe give us some information about rehabilitation and since he’s not, I agree with Mr. Kasper.”

With the information on the applicant’s history, Johnson’s testimony, and the fact the applicant did not show up for the hearing, the council declined the license in a six to zero vote.