The United States Forest Service Salida Ranger District (USFS) and Colorado Mountain Club are at work on a major reroute of the South Fooses Creek Trail on Monarch Pass. The trail is a part of the Colorado Trail and also a connector for the Continental Divide National Scenic Trail.  This popular trail draws hikers and mountain bikers from around the world, but it’s been way over-loved. 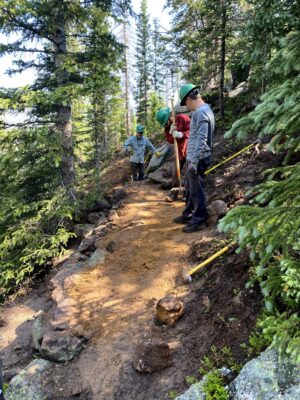 While the local project has already gained national attention as a USDA Forest Service Capstone Project, it hasn’t gotten the attention it should on the local level. That’s a shame because the collaboration is important; this work represents the benefits the Great American Outdoors Act (GAOA) delivers to the American public. This is a major investment in regional/local recreation infrastructure, public lands access, and land and water conservation.

The GAOA is investing $210,000 in the South Fooses Creek Trail reroute project (including $205,000 in deferred maintenance) of the $347,284 total project costs to create a 3-mile reroute that will once again allow safe access to the Continental Divide Trail for all visitors.

“The work on the trail reroute began last year, mostly removing trees and clearing,” said Maher. “This year we’re doing the digging.  We hope to finish by late September to let the trail rest and settle over the winter. Then it is hoped we’ll do the official opening in June, 2023.”

Maher explains that the South Fooses is a main connector between the Colorado Trail and the Continental Trail; hikers or mountain bikers can go the front side, or stay on the Continental Divide trail up to Monarch, Twin Lakes and the Cottonwood trail. 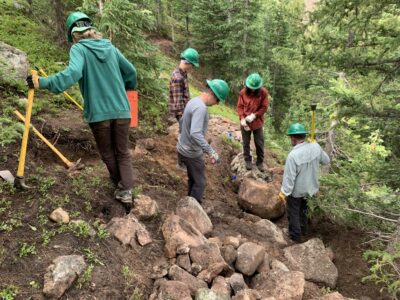 The rerouting of the South Fooses Creek Trail is a rugged project through rugged terrain. Photo courtesy Colorado Trail Foundation.

“The reason the trail is being rerouted is a whole list of things, but the big one is, as you’re coming off the Monarch Pass Trail to the Fooses, it’s a steep, rugged trail. The first quarter-mile is rocks; there’s no dirt at all.”

“So hikers are coming up the Fooses Drainage while mountain bikers are screaming down, and it’s tough to stop,” he explained. “This section hadn’t had any work on it because it’s steep and rugged, and it’s gotten worse.”

The goal, said Maher is to make that portion of the trail better for the two-way traffic, and “it will also open up the sightlines, the scenery and add safety.”

“The bottom of the trail where we tie back into the main trail it feels a lot different; the bottom three to four miles are in good shape, and wide open. Top to bottom the trail will feel a lot more consistent.” 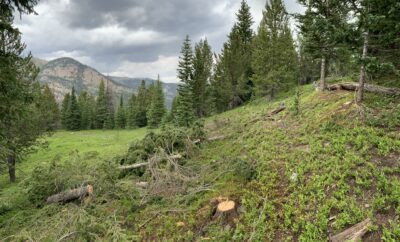 Reconstructing the South Fooses Creek Trail, and moving portions of it higher up out of marshland has also opened up more scenic vistas. Courtesy image.

But this isn’t the only problem with the trail. “As this trail gets into the drainage there is a big wet, marshy area, full of bogs. It’s great wildlife habitat,” Maher explained.  “But the redo is taking the trail up and onto the hillside. It’s better ground and better views.”

Maher explained that the USFS trail community is in the slow process of reviewing trails, many of them historic. “The thing is, lots of them were done by horses or miners. They are old, and in rough shape. The big thing now is to build reroutes that will last longer and be easier to maintain.”

Maher says that many partnerships have been forged to complete this trail reroute.  Among the contributors working with the U.S. Forest Service on the South Fooses Creek Trail:

“This is unique because it has a lot of different partners/groups working on this. Singletrack Trails out of Grand Junction, was added because they have a lot of experience in mountain bike trail construction. The Colorado Trail is so well known and riders trust them.”

Asked how the South Fooses Creek Trail rerouting came to become an approved project of the federal Great American Outdoors Act, Maher said that the USFA Salida area had a short window in which to propose projects. To be nominated, a project had to be far enough in the planning stage to be funded. “This one on South Fooses had been in the works for a long time, so it was a good candidate. It got nominated and funded. 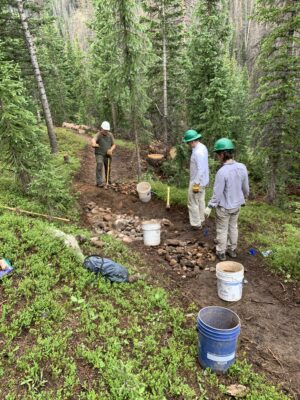 The rerouting of the South Fooses Trail began in late June 2022 and it will take until June 2023 for the full length of the rebuild to be reopened. In this photo they are actually creating new trail above where the old trail ran. Photo courtesy Colorado Trail Foundation.

“The Salida Ranger District of the USFS asked us if we’d be available to assist on the project,” Maher explained. “They have a lot of projects going on and frankly, the feds like to send money….but they don’t fund staff, so volunteer involvement is important.”

Maher noted that this is only the latest USFS partnership “For the past 10-15 the USFS has been doing a better job of partnering, from timber work to wildlife … we got involved and we acquired matching funding. Most federal projects require matching funding so we went to the Colorado Parks and Wildlife and the National Forest Foundation, to make it a successful project.”

Maher admits that some will love the rerouted trail, others might not. “People are split. Many in the mountain biking community like the rugged trails, but a lot will be thankful not to have to ride the rough section. They should know it will still be there this year. We plan completion of the reroute this fall, then we’ll open it next summer.

Featured image: Along the heights of the Continental Divide Scenic Trail. Image courtesy of Wild Connections.

Editor’s note: Great Outdoors Month, is an annual celebration that encourages all Americans to get outdoors and enjoy responsible, healthy recreation on local, state, and federal lands and waters. As the number of those enjoying the outdoors continues to grow, more people are recognizing the value of outdoor recreation and outdoor spaces for both physical and mental health.