If you look at the U.S. Drought Monitor, Colorado’s conditions appear more “tan” than they did a year ago. The April 13, 2021 map was awash in red areas on the western side of the state, denoting extreme and exceptional drought.

It matched the increasingly dire warnings about the Colorado River, which saw diminishing levels at lakes Powell and Mead, the river’s major storage and hydroelectric networks. 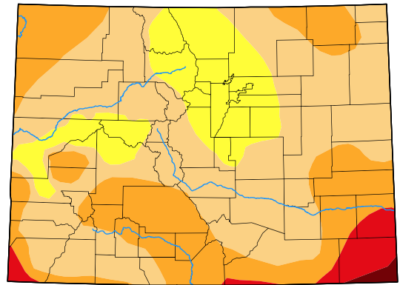 While today’s drought map shows the state of Colorado in better condition than a year ago, there is a strong possibility that Denver’s snow season, for example, will be the shortest on record in 135 years. And meanwhile, the situation at Powell and Mead reservoirs continues to worsen. As a result, the U.S. Interior Department is weighing extremely difficult decisions that could cause further, immediate cutbacks for users in Arizona, California, and Nevada.

There’s now an unprecedented proposition to keep enough water in Lake Powell – an additional 480,000 acre feet – to maintain power production at its Glen Canyon Dam instead of releasing it downstream to Lake Mead. That would mean dropping the water at Lake Mead an additional seven or eight feet, according to the Southern Nevada Water Authority. The decision is expected by April 22.

“This reality reinforces the need for the basin states, and all entities in the basin, to prioritize work to further conserve and reduce use of Colorado River water to stabilize the system’s reservoirs,” said Assistant Interior Secretary Tanya Trujillo, who issued a letter last week to top water officials in the seven Colorado River Basin states.

Glen Canyon Dam generates power for customers in five states. It requires a pool at 3,490 feet (above sea level) to continue to operate. Lake Powell currently sits at 3,523 feet, 40 feet lower than a year ago.

Lake Mead’s water levels are sitting at 1,059 feet, having dropped below 1,060 feet for the first time since the reservoir was first filling, beginning in 1941. Last summer’s low levels triggered a first-ever cutback for users, primarily in Arizona. Officials say that if Lake Mead’s levels drop below 1,050 feet, a second tier of cuts may be ordered for Arizona, California, Nevada, and Mexico.

Most of Lake Mead’s water releases go to California. Hoover Dam can continue to generate power until the lake levels hit between 925 and 950 feet.

It remains uncertain how much of a positive change, if at all, can be delivered to the Colorado River with the 2022 snowmelt. The current Drought Monitor map indicates that Colorado remains in a prolonged dry spell, with most of the state ranging from abnormally dry conditions to severe drought in the six-tier scale, with extreme and exceptional drought in the two southern corners.

April isn’t always a good indicator of where the drought figures are going to go. Temperatures can drop, as they have this week, or they can warm enough to hasten the melt of the snowpack, with wind adding to the pace. There’s also the matter of dry soils absorbing runoff before it reaches its intended waterways.

Last year’s conditions in Colorado improved after heavy snows in late April, but that precipitation came with caveats from climate experts looking at the then-21-year drought in the western United States. “If we look at the Southwest U.S. as a whole, it really goes back to 2000 that we’ve been in a dry period,” said state climatologist Russ Schumacher.

Chaffee County sits in the moderate drought category in the Monitor’s six-tier scale. Current snow-water equivalent in the Arkansas River Basin snowpack stands at 90 percent of median, according to the USDA’s SNOTEL survey system. Statewide snowpack is 92 percent of median.

Snow-water equivalent levels within the Arkansas basin vary widely, with sites measuring between 62 and 225 percent of median. The local sites at St. Elmo and Porphyry Creek are each measuring at 101 percent.

Editor’s Note: According to the Water Education Foundation, one acre-foot equals about 326,000 gallons, or enough water to cover an acre of land, about the size of a football field, one foot deep. An average California household uses between one-half and one acre-foot of water per year for indoor and outdoor use.