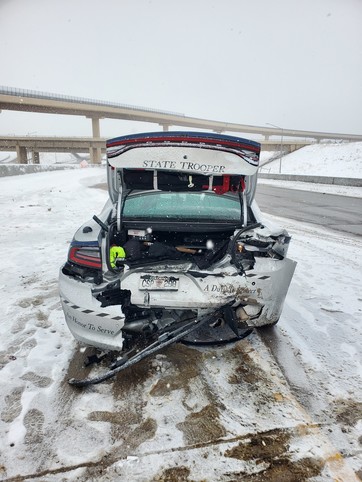 Colorado has a “slow down, move over” law in force

Apparently, the warnings prior to this last major storm weren’t good enough — or drivers are ignoring them. Two incidents in the past 24 hours have caused the Colorado State Patrol (CSP) to again remind drivers that there is a Colorado law in place to better protect their patrol officers stopped to help motorists, from being hit. 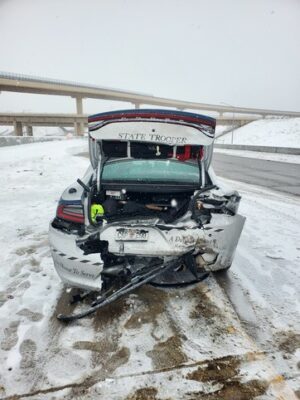 One of two Colorado State Patrol vehicles hit by motorists in the past 24 hours. The trooper was assisting a motorist in trouble on the highway. Image curtest of the CSP.

The CSP reported this morning that two CSP vehicles have been hit by drivers on Colorado roadways during the recent winter storm. The report adds that the drivers failed to slow down, or to move over when they saw emergency vehicles on the shoulder or stopped.

The two separate incidents took place in Douglas County and Adams County when CSP Troopers were aiding in vehicle crashes. No injuries were reported.

“When winter weather returns, we know troopers and other roadside workers are at greater risk from motorists not factoring in poor road conditions or reduced space to work due to ice and snow,” said Chief of the Colorado State Patrol Colonel Matthew C. Packard.  “Drivers –  put down the distractions and let go of excuses about needing to speed. The “slow down, move over” law requires you to move over a lane to give us room to work or slow down 20 mph under the posted limit. Please protect us, so we can protect you when you need us.”

The law is intended to protect emergency, tow, and maintenance workers that are vulnerable to injury and death because their jobs naturally expose them to the dangers of injury or death by working around passing vehicles. It is also there to protect the passing motorist from living with the consequence and memory of striking one of these workers.

When weather conditions or traffic conditions are bad, as they frequently are at this time of year, drivers should be even more cautious on the roadways.  According to the CSP, whatever speed you think you can go in adverse conditions; a good rule of thumb is to go 10 mph under that and your chances of crashing will be reduced.