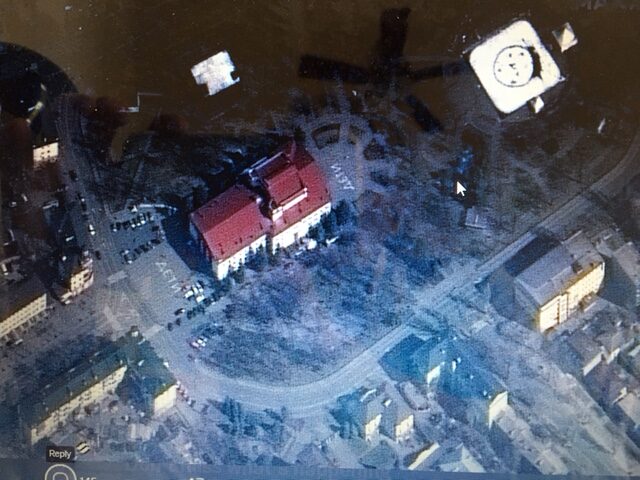 Today the U.S. upped its support of the Ukrainian people to help defend their nation against invasion, and the president declared Russian President Vladimir Putin to be a war criminal. The announcements came after an early morning address by Ukrainian President Vlodymer Zelensky to the United States Congress, where he evoked in our memories images of the bombing of Pearl Harbor and the 9-11 attacks.

His words had a visceral impression on the lawmakers, who  were united across their normally partisan lines in support of Ukraine’s fight for survival.

These two events are bookends to the devastation that Ukraine has become in 21 days of this unprovoked war. As the Russians continue the invasion of this sovereign, democratic nation, witnesses say the Russians are purposely and indiscriminately attacking civilians in what many have described as the genocide of a sovereign people. Especially in its cities, the human tragedy is difficult to comprehend.  Imagine one 9-11 happening every minute. 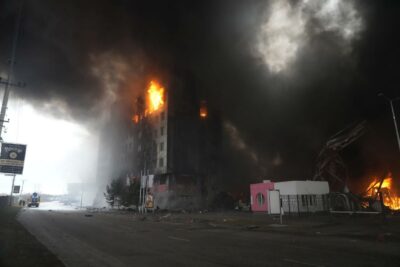 A highrise on fire in Kyiv after being bombed by Russian forces. Ukrainian State Communications photo.

The Red Cross calls the situation in the formerly beautiful Black Sea port city of Mariupol a human disaster. In what was a city of half a million people, hundreds of thousands of civilians are trapped without food, water, electricity, heat, or a way out. As of this morning, Russian troops took over a critical care hospital there and are holding more than 400 doctors, nurses and patients hostage, while using the hospital as a base of operations to shell the city.

This morning Russian military bombed the Mariupol Drama Theatre, where an estimated 1,000 to 1,200 people had taken refuge. The number of casualties isn’t yet known. Look closely at the featured image: the building was marked front and back with the Russian word for “children”. The Russians bombed it anyway.

To see the theatre packed with families, follow this March 12 link of the Mariupol Theatre via Telegram, as published by The New York Times: https://nytimes.com/live/2022/03/1

But before that happened, on Wednesday (Russian time) Putin outdid himself, referring to pro-Western Russians as “scum and traitors” who needed to be removed from society. He went on to describe the war in Ukraine as part of an existential clash with the United States. He appeared to be setting the stage for more aggression aimed at the West.

In fact, something the West hasn’t necessarily understood is that Putin is calling the West — all of us — Nazis. His increasingly hard-line speeches equate all of us to former Nazi Germany, something to be exterminated (as if Russia was the only country to fight the Nazis). His speeches evoke deep emotions in Russia — a country which in fact lost more than 20 million people in World War II. But first under Soviet rule and then Russian authoritarianism the country has not moved on. A significant portion of the people who see only state-run media channels believes him.

But today Russia’s foreign minister, Sergey V. Lavrov, said that Russia saw “a certain hope that a compromise can be reached” with Ukraine to end the war.

The human toll on this country is dire – more than three million refugees have crossed the borders into other NATO countries; 1.5 million of them are kids. At least 10 percent of the 45 million Ukrainian population is displaced, either in-country or having fled across the borders. UNICEF says one Ukrainian child is becoming a refugee every second.

Journalists have died covering this war, some deliberately targeted by Russian troops.  This is war, but this is a new standard of brutality.

The U.S. Steps Up Military Aid 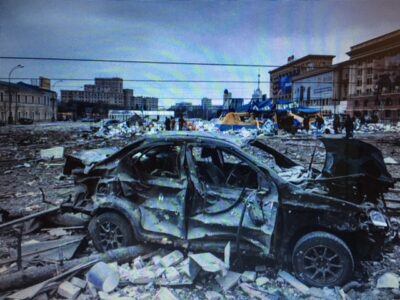 While America steadfastly refuses to support a no-fly zone over Ukraine (leaders fearing that it may trigger World War III), it is offering a broad array of military support.

Today the president approved nearly one billion in increased hardware and support; including an array of anti-aircraft systems including stingers, machine guns, shotguns, rifles, drones, rocket launchers, and ammunition. The president says there will be more to come.

“I want to be honest with you, this could be a long battle in the face of immoral and unethical attacks by Russia on Ukrainian civilians,” said President Joe Biden.

Then the president took a new step as he left the press conference in which he announced the new weapons support. He was asked ‘Do you believe that Vladimir Putin is a War Criminal?’

Biden turned around, came back to the microphone, and asked the reporter to repeat the question. Then he said, “Yes, Vladimir Putin is a war criminal.”

Featured image: The Mariupol Drama Theatre, which was sheltering from 1,000 to 1,200 people, most families with children, was hit by Russian bombs this morning. If you look closely you can see the Russian word for ‘children” written in large, white letters on either side of the building. The satellite image was reviewed and picked up by The New York Times.