Score a double gold for a Chaffee County-based vintner – Vino Salida. The wine-maker, based at 10495 CR 120 in Poncha Springs, has won a Governor’s Cup, Best of Colorado Wine Competition award for its Rosso Vino Vermouth.

The honor was celebrated Nov 15 in Denver at Colorado Uncorked, a wine celebration event held to benefit the History Colorado Center. Vino Salida’s vermouth entry was one of 14 wines sampled at the 2019 Governor’s Cup Collection, each paired with a small-plate menu item created specifically to pair with that wine by Colorado’s top chefs.

“We’re thrilled to have received this award,” said Vino Salida Sales and Marketing Director Jessica Shook. “It means a lot to have our hard work recognized. We’re really proud to be recognized as one of the best wineries in the state. ”

When Rosso Vino was selected as the double gold winner of the vermouth category, judges noted the vintage’s exceptional depth and drink-ability. This is quite an honor for an organization that calls itself a small, artisan winery.

In creating its Rosso Vino, Vino Salida has continued one of its most admirable traditions – using only ingredients from Colorado. It sources its wines from the highest quality Colorado grapes from vineyards in Palisade, Colorado. From there, for its vermouth, it has partnered with Wood’s High Mountain Distillery to turn the wine into grape spirit fortified wine. 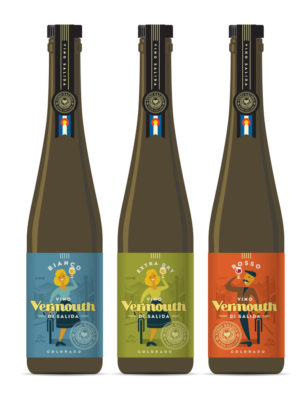 According to Vino Salida Wine-maker and President Steve Flynn, the botanicals used in its making include herbs, spices, roots, and flowers. While Vino Salida is willing to share that the Rosso Vino vermouth is a proprietary mix of organic botanicals, said to include Angelica Root, Chamomile, Lavender, Sage, wormwood, and yarrow, the exact recipe is a guarded secret.

At its best, vermouth isn’t just a trendy cocktail ingredient, it’s a cocktail all on its own.

“It makes an excellent cocktail mixer or slow sipper,” according to Flynn.

For those who don’t know vermouth, the vintage has a history dating back to 18th century Italy. Vermouth, which can be created using either red or white wine, is an aromatized, fortified wine. The modern versions of the beverage were first produced in the mid to late 18th century in Turin, Italy.

There are literally hundreds of subtleties and variations for vermouth, because of the wide variety of botanicals that can be blended in their creation. Those botanicals can be quite exotic, ranging from roots, barks, and flowers, to seeds, herbs, and spices. In addition to being consumed as an aperitif or cocktail ingredient, the white version of vermouth is sometimes used as an alternative white wine in cooking.

The name “vermouth” is a derivative of a much older German word for the earlier German wormwood-infused wines known as ‘wermut’. As with many of our favorite boozy creations, vermouth was originally created for medicinal purposes. It’s botanicals were said to be helpful for aiding digestion and easing an upset stomach. These days it appears vermouth is savored more for its flavor.