Virtual Volunteering: from Buena Vista to Bishkek, How One Local Persevered Through the Pandemic

Alan Robinson, a Buena Vista local with 50 years of experience in developing visitor and tourism programs in and around national parks in the United States and a dozen countries, recently completed a virtual international development project between Buena Vista and Bishkek, the capital of Kyrgyzstan, both with economies in which tourism plays an important role.

He has completed 16 volunteer projects ranging from regional parks to nature trails. Ark Valley Voice spoke with Robinson on how this project, focused on rural and agricultural tourism, looked different than past projects.

Robinson was recruited and supported by an international development assistance group called ACDI-VOCA in a program known as the Farmer-to-Farmer Program using funds provided by the U.S. Agency for International Development. 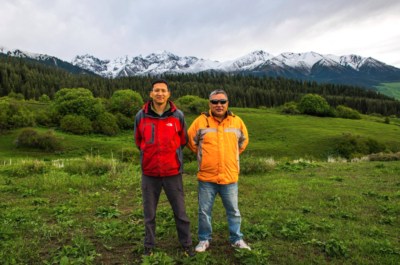 Robinson explained, “some of these groups are well developed and independent while others are just starting and are in need of support and technical advice. In order to provide some common standards that communities can strive to meet to improve the quality and safety of their services, Robinson’s NGO host requested his service as a volunteer to collaboratively develop a Best Practice Manual.”

He continued “The Best Practice Manual was then developed in collaboration with the NGO host so the topics and contents would directly address issues significant to the community-based tourism groups under the NGO’s umbrella. Chapters included in the manual explained how to transparently and effectively share economic benefits with the wider communities in which these groups live.”

“The Manual also included detailed advice on development and management of common adventure activities the community-based groups offer, such as day and overnight horse trekking, multi-day backpacking, and day-trip mountain biking.  Some communities are now beginning to offer snow sports such as downhill and cross-country skiing and snowshoeing and are preparing to offer whitewater rafting,” said Robinson.

He then explained what working on this project looked like. “Physically the project was all virtual: it was accomplished via a series of four to five long Zoom meetings (made slightly complicated by the 13-hour time difference between Buena Vista and Bishkek. After a couple of sessions, I produced a first draft which was reviewed and refined during subsequent sessions. My NGO hosts were extremely responsive and quick to provide additional, often very specific, requests to cover additional material.”

Through this process, other challenges surfaced. “During this pandemic year, the influx of foreign tourists, on which the Kyrgyz community-based groups almost totally depend, nearly completely disappeared. The 2019 tally of 25,000 foreign tourist arrivals served by the NGO’s collection of 15 communities shrank to a few hundred.”

“Kyrgyzstan is being forced to deal with the reality of essentially a lost 2020 year and potentially a lost 2021. They are using this forced gap to reassess their basic approaches and business models, stressing “building back better” while recognizing near-absolute dependence on foreign tourists can be a serious liability. Diversification will be key to their resilience even when foreign travel again becomes safe. They recognize the need to develop products attractive to their own domestic tourism market. As well. they need to use their organizational and logistic skills in arenas outside tourism such as retail sales, internal business travel, production of exportable handicraft or even agricultural products” he added.

The virtual volunteer approach for Robinson was different than previous volunteer projects. In the Kyrgyzstan project, he had no opportunity to personally interview representatives of the community-based groups to verify their needs were indeed what was suggested by his NGO hosts. 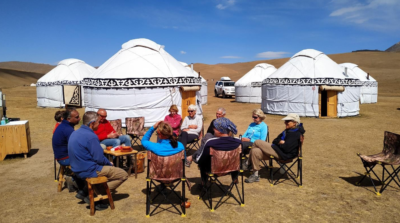 Robinson explained that due to the COVID-19 pandemic, he had no chance to experience the accommodations, food, cultural programs, and adventure activities nor the ways in which community members provided service.

In the past, his personal interactions have often led to insights about new opportunities, new standards of service, needs for additional training, and new experiences with the potential for being attractive to international and domestic tourists. He had little chance to suggest such new directions and opportunities.

“The lack of a true ability to personally connect with my counterparts is probably the most significant challenge that needs to be overcome,” he added.

“The fact that I and my colleagues were flexible enough to do it by virtual means meant that I could continue to contribute but I could also continue to have the satisfaction of contributing,” he said, reflecting on the experience. “In the midst of a pandemic it wasn’t good for anyone to do anything but this. It’s quite possible that I will continue to do this virtually with future projects.”

Despite the shortcomings of virtual volunteering,  Robinson feels his contribution was useful and will be distributed and promoted, and used as a framework for further training and motivation in the community-based groups. Perhaps the “Best Practice” that will be the toughest to achieve will be the recommended diversification to provide a level of protection from some future disruption in international tourism. This could be a challenge whether that disruption is yet another pandemic, local political unrest, worldwide depression leading to reduced travel or some other as yet unforeseen disruption.

Robinson plans to visit Kyrgyzstan in the summer of 2022 to follow up on the project and finally make those personal connections. Click here to learn more about Robinson’s work.