On Monday the Federal Bureau of Investigation (FBI) executed a warrant at former president Donald Trump’s palatial residence in Palm Beach, Florida, as requested by the National Archives.

Deniers of the 2020 election results lit up social media across the country with extreme calls for violence, frequently using the words “lock and load,” and “This means war.” According to watchers of conservative, right-wing activity, it was the most violent public rhetoric since the days that led up to the Jan. 6 insurrection that overtook our nation’s capitol. 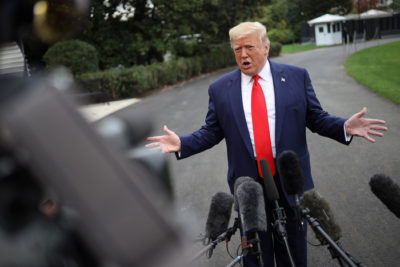 President Donald Trump on the south lawn of the White House on Thursday, where he publicly invited Ukraine and China to investigate his political opponents. Photo credit New York Magazine.

The action drew the fury of Trump supporters across the country, including a swath of high-profile Republican politicians, who without knowledge of the exact search, proclaimed it to be a political vendetta. “I’ve seen enough said Rep. Kevin McCarthy. “The Department of Justice has reached an intolerable state of weaponized politicization. When Republicans take back the House, we will conduct immediate oversight of this department …”

Trump himself (although a rich man who has been showered with privileges) has assumed a posture that he has practiced for years: the victim.

The National Archives has been trying for months to retrieve the classified presidential records which Trump illegally removed from the White House when he departed. (If they got into the wrong hands, it is possible it could endanger national security.) Leaving them lying around or accessible by others, possibly for sale to the highest bidder isn’t a viable option.

To obtain the warrant required probable cause. It also would have been preceded by a subpoena and required that Trump got a copy of the warrant, as well as an inventory of what was removed.

Per its usual policy, the Department of Justice hadn’t commented as to what exactly was the object of the search. But this left the narrative to conservatives rallying around Trump, which by this morning had risen to screeching level.  Breaking with policy, this morning U.S. Attorney General Merrick Garland gave a press conference asking the judge to unseal the warrant.

… the case against Trump here is impossible to evaluate, because we know the basis neither for the warrant nor the investigation. So the certainty that Trump is being politically persecuted cannot be supported by evidence. It is instead based on ideology: There are people against whom law-enforcement action or abuse is always justified, and there are people against whom it can never be justified …

This is why, for example, it was perfectly permissible for Trump to order his attorney general to prosecute his political opponents, to even campaign on that basis, but it is intolerable politicization for him to be investigated, regardless of the basis. Indeed, there is no need to know what the basis even is; it is by definition unjustified because of whom it targets.

This reasoning is also why the police who defended the Capitol against the rioters on January 6 were assaulted by people who in any other context might chant “Blue lives matter.” Law enforcement is legitimate and deserving of unconditional support only as long as it enforces the law against groups conservatives want it to target and exempts those they do not. Shortly after news of the raid broke, far-right representatives such as Lauren Boebert, Marjorie Taylor Greene, and Paul Gosar called for the FBI to be defunded or destroyed.”

By the law known as the Presidential Records Act, the National Archives is charged with preserving every single document produced by a president’s administration. That the search has been necessary shows Trump’s continuation of the demonization of the FBI, the Department of Justice, and law enforcement during his four years in office, where he often acted more like a Mafia don than the leader of the free world.

The attempt to retrieve presidential records is a first in U.S. History – no other president has attempted to hide the records of his administration and keep them from being collected. Even former President Richard Nixon turned over all documents (except the missing minutes on his secretary’s tape recorder).

Almost immediately, a broad swath of Republicans (supposedly the party of law and order) decried the use of law enforcement agencies. Lost among these critics, when one of their own is investigated or called to task for not following the law, is the American promise of the Constitution that “no one is above the law” – not even a former president. But some are pointing out that Trump supporters simply believe that Trump should not be subject to the law at all. It is true that around the world political systems with such exemptions exist; but democracy is not one of them.

Most Conservatives have cheered on other investigations of their political rivals; such as the highly publicized FBI investigation of Democrat presidential candidate and Secretary of State Hillary Clinton’s emails just weeks before the 2016 election.

Never one to lose an opportunity for self-promotion, by Tuesday morning Trump’s political committee known as “Save America” was at work fundraising on the situation. This might create a quandary for Republicans at all levels from county level to national office. Heading into the 2022 midterms, they might rather focus on issues like inflation, fighting gun legislation, culture wars and new warnings of voter fraud, than again circling the wagons around Trump.