We the People, A constitutional examination of the issues surrounding the Red Flag Bill

Another in our series on the Constitution and the Red Flag Bill: Earlier articles explored the mental health and substance abuse issues highlighted by Colorado HB19-1177. This installment explores the constitutional issues surrounding the proposed bill, as some Colorado counties declare themselves to be Second Amendment Sanctuary Counties. 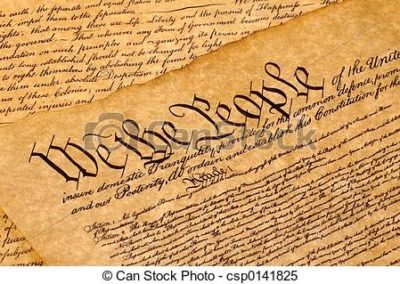 Legislation being presented in many states around the nation including so-called “Red Flag” bills and gun restriction legislation, which appear in conflict with one part of the Constitution: the Bill of Rights. As outlined by Fremont County Commissioners and many others, the primary Constitutional conflicts they site with HB19- 1177 appear to be the Second and Fourth Amendments.

Some awareness about the potentially perilous path that a Second Amendment Sanctuary County resolution could bring to Chaffee County and the rural lifestyles we have come to cherish is wise. It requires a clear understanding of the United States Constitution, including all its parts.

There appears to be little doubt that the framers purposely intended each part to be built upon the point which precedes it. The Constitution’s first two parts were drafted over six momentous weeks from August through September 1787. The Bill of Rights Institute website www.docsoffreedom.org interprets it as “The way to secure inalienable rights, the Founders believed, was to consent to give up a small amount of our freedom so that government has the authority and finances to protect our rights.”

The Preamble to the Constitution is probably one of the most recognized statements from the Constitution. Its concise words.“We the People of the United States, in Order to form a more perfect Union, establish Justice, insure domestic Tranquility, provide for the common defense, promote the general Welfare, and secure the Blessings of Liberty to ourselves and our Posterity, do ordain and establish this Constitution for the United States of America.”

Though simply stated, the Preamble not only sets forth the Constitution’s purpose but it also creates a solid framework for the two remaining parts.

The second segment, the Articles, tends to be one of the more overlooked parts of the Constitution. This section is made up of seven Articles. These articles establish, among other things, the three co-equal branches of government we know as the legislative, executive, and judicial branches. Each branch provides a certain function in government that, in the founder’s experience, had been abused by their previous ruler, the English king.

Vitally, the Articles explain the purpose of each branch, spelling out how each branch would be set up and how it would run. The importance of this part of the Constitution cannot be overstated, because the separation of powers between each branch provides our foundation of checks and balances.

The third segment of the United States Constitution, the Bill of Rights, contains the first 10 Amendments. The primary purpose of these Amendments is to outline and codify those inalienable rights referenced in the Declaration of Independence as “life, liberty, and the pursuit of happiness”, and to further protect those rights with “due process of law.”

When conflict arises with one part of the Constitution or one Amendment to the Constitution, it quickly gets portrayed by a group or person as an assault on the entire Constitution. The Amendment(s) and ultimately the Constitution, is then unceremoniously used as a bat, a sword or a shield wielded against those arguments — for or against — whatever legislation is perceived as infringing on a certain right/Amendment.

We do a great disservice to this monumental document by cherry picking only those parts that serve our needs at the time, without taking into account the Constitution’s larger purpose. Furthermore, as the research for this article indicates, the Constitution, like so many other foundational documents, is meant to be used as a guide and process rather than as an end, in itself.

Those actions taken by county governments against superior state governments risk committing a disservice to the Constitution. The Articles of the Constitution creating the three co-equal branches of government were mirrored and adopted by nearly all states, including Colorado. The legislative branch, made up of senators and representatives who were elected by the people, is focused on the purpose of creating and enacting laws for the people.

Assuming those senators and representatives were elected fairly and in accordance with the law (Colorado has touted itself as one of the most secure election processes in the nation), it is safe to say that the actions of elected officials are just as much a part of the Constitution as the Bill of Rights. In some cases, their role may even be more important because without the foundational protections provided by the Articles and in particular the Legislative branch, the Bill of Rights would be ineffective.

Of course, there are cases where laws have been passed that do infringe on our basic rights. The Patriot Act, passed in the wake of 911, is one recent example. This does not mean a law is justifiable because of the dire issues faced by lawmakers at the time. It simply means that there are other parts of the Constitution that must be used to help preserve and protect those individual rights.

It may very well be that Colorado’s proposed “Red Flag” law infringes on some constitutional rights. It could be argued that it is far more prudent and effective for those who oppose the law to take it up with the legislature prior to passage, rather than fight it in the courts after it is passed. For law enforcement personnel to defy the very document they are sworn to protect does not appear to be logical or constitutional.

One New Mexico commissioner said these resolutions are “symbolic acts,” a phrase being copied by others. When a county governing body adopts a resolution of physical action against a superior state governing body, the symbolism would seem a stretch.

These actions could set a perilous precedent where the superior governing body has only two real options: capitulation or confrontation with the rebellious government subsection. The reasons why the Colorado State Legislature has constitutional legitimacy for proposing and ultimately enforcing the legislation has been laid out. At some point, constitutionally-sound laws must be enforced in order to maintain public order and faith in the rule of law.

When a state finally chooses to require local governments to enforce the law against blatant rebellious actions, confrontation could be the result. Do those who oppose a law they don’t like to meet the state authorities at the county line with guns in hand, believing they are doing the constitution a great service? How many of these constitutional saviors have held another human being in their sights? What if that other person were their father, brother, son, cousin, or neighbor?

Our citizenry traveled this path before and it was not some evil foreign invader that was held in their sights, it was their fellow countrymen. If that is not a sobering enough thought, in the process of reading and researching Second Amendment sanctuary counties for this article, a great irony becomes painfully obvious. When these counties adopt resolutions and pledge support to the sheriff to not enforce the law, they are, in effect, giving over authority to one person to enforce the law when, and if, he or she sees fit.

The links to previous articles on the topic: