Fire officials have scheduled a public meeting for 5 p.m. Thursday, Sept. 19 at the Poncha Springs Town Hall to provide a fire update. The fire started from a lightning strike Sept. 9 and is burning approximately nine miles south of Salida. There are currently 72 firefighters on the fire lines. 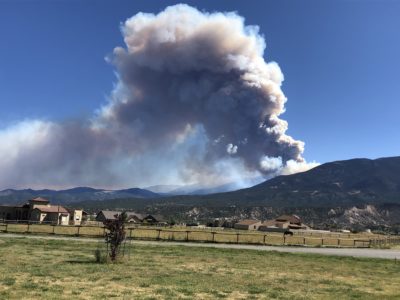 Since the Decker Fire was sparked by lightning Sept. 9, the fire has been contained to around 846 acres. (Photo by Michelle Pujol)

On Tuesday, a multi-mission aircraft (MMA) flew the fire and mapped it at 846 acres. Tuesday marked the second consecutive day of no new growth. Crews took advantage of the fire behavior to scout the fire to look for possible locations to construct contingency lines in anticipation of the change in weather expected later on Wednesday.

Regarding fuel loads, the U.S. Forest Service estimates that areas within the wilderness have up to 80 percent tree mortality from beetle-kill and blowdown events. It confirms that the Decker Fire is being managed to remove these high-risk fuels from the landscape for the ecological benefit and to reduce the risk for catastrophic wildfire in the future.

The fire may be visible from both the U.S. 50 and U.S. 285 corridors. Motorists are asked to not stop in the roadway and not call 911 to report fire behavior.