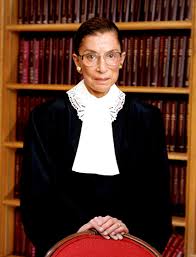 When Supreme Court Justice Ruth Bader Ginsberg died Friday at age 87 after battling at least three forms of cancer over the past several years, the news spread through a group of women gathered socially-distanced at the corner of Alpine Park following a Salida Chamber event.

“Oh no,” said one of them with a near sob in her voice staring at the news feed on her phone  …”We’ve lost Ruth.”

Collectively we caught our breath, many of the gathered women gasped — in a year with so much heartbreaking news it was simply unbelievable to take any more bad news.  The thing is, the very fact that we all felt on a first-name basis with this small and mighty woman says a lot. During her legal career as a prosecutor, a judge in the U.S. judicial system, and then appointed as only the second woman ever to the U.S. Supreme Court (behind Sandra Day O’Connor), this woman’s impact on the constitutional administration of justice and her impact on every facet of our lives has been monumental.

We ranged in age from 24 to nearly  70, a cross-section of the county’s female demographics. But every single woman standing there knew exactly what that one name — Ruth — referred to; a hummingbird-sized woman of immense stature. A woman, who between 1973 and 1978 successfully argued six cases before the Supreme Court that protected gender rights. A justice who wrote clear and concise decisions affecting voting rights, civil rights, and the Lilly Ledbetter Decision that determined that equal work should receive equal pay, no matter if the worker was a man or a woman.

As the dean of the liberal justices, she became famous as “the notorious RBG” writing dissenting decisions that stand as some of the most biting indictments of conservative-led attacks on women’s rights, voting rights, and gay rights. The words “I dissent”are inseparable from this legendary justice.

Ginsberg’s last wish, dictated to her granddaughter, was that she wished that her successor be appointed by the next president, in the election that is now only 45 days away (and some states are already voting).

However, Republicans, who 11 months before the 2016 election blocked Obama’s Supreme Court nominee Merrick Garland from even having a hearing, say they are going to move immediately to pack the court with another conservative nominee. Hypocrisy is truly too mild a word for the situation.