While Most People Are Sleeping 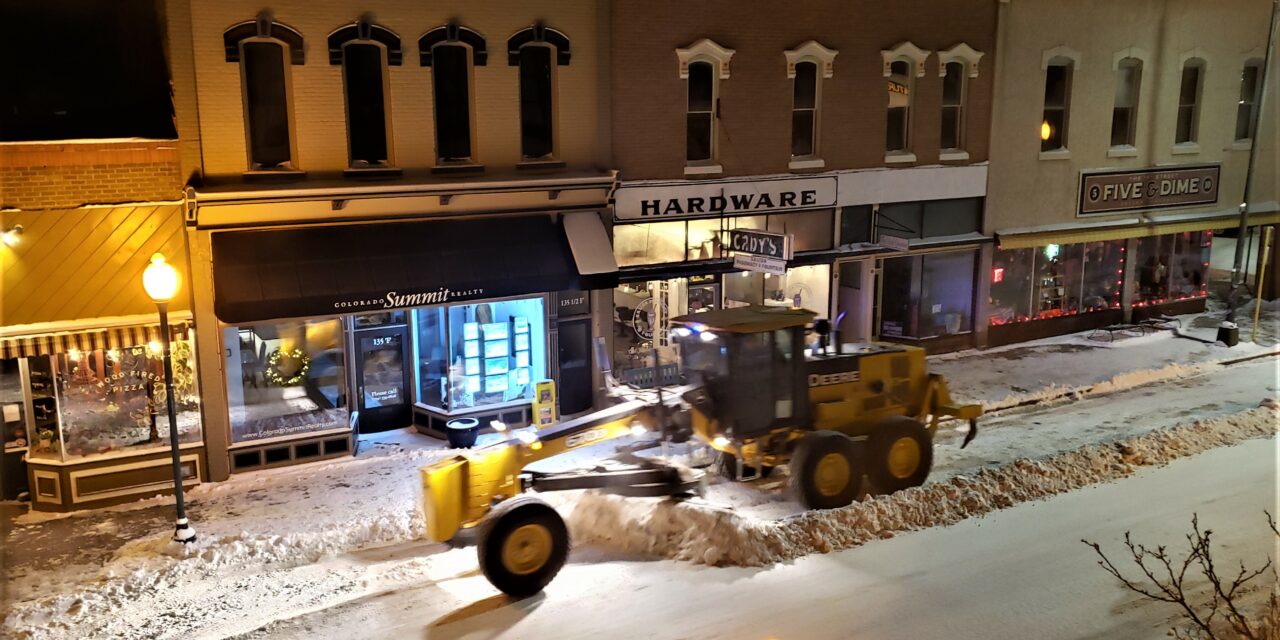 It’s 3:23 a.m. on a subzero winter’s night. Most people are fast asleep, but first responders and medical personnel are at their posts, ready to deal with whatever crackles over their radios or comes in their doors. On winter nights, there’s another group of hardworking people, often unrecognized who are also out there on the front line.  They’re the plow crews in our municipalities, along with the Colorado Department of Transportation (CDOT), keeping our streets and highways safe for motorists and pedestrians.

With major snow causing a “no school day” and very cold temperatures persisting that would likely prevent a fast melting, plans were made to get the streets in downtown Salida cleared before ruts and ice slicks at intersections became a problem.  As noted earlier by Ark Valley Voice, Salida  residents were asked to keep their vehicles off the major streets overnight to allow crews to bring their heavy equipment in and get the job done before most were awake.

Clearing Salida’s streets is a team effort. It’s a carefully choreographed, precision drill, tailored to the weather and unique nature of each storm.  Long before dawn on Thursday morning, Salida Public Works was out in force.  For this storm, the motor grader is used to pull snow away from the curb and “windrow it” in the middle of the street.  The heavy grader on its nearly 5-foot tall wheels makes a low rumble as it slowly takes multiple passes.  From his high perch, Kevin Nelson operates the many controls and displays as he gingerly navigates around the dining patios and curb bump outs. 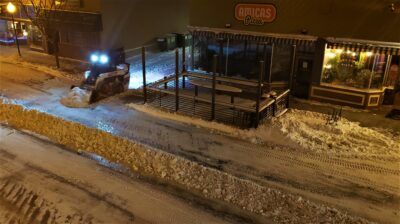 Next, Zach Talbert was seen operating the skid steer. This piece of equipment is used for removing snow from tighter tolerances such as adjacent to alleys, crosswalks, on-street patios, and, parked cars.

Unlike the grader, it can literally turn on a dime and is probably the most fun to drive.  Even the alleys in the core of downtown got the full treatment, helping the usual trash trucks, UPS/FedEx, semis and bobtail trucks that ply them daily, bringing supplies to businesses and residents alike.

After that, the high windrows in the centerline of the street need to be cleared.  That falls to the operators of the front end loaders and dump trucks who carry it offsite.  This stage involves a lot of careful backing and filling, lifting and precision dumping to get it done. 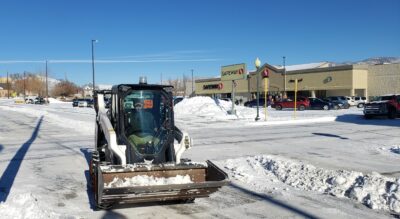 Later the same morning, under bluebird skies (and still well-below freezing temperatures), the skid steer continues to work, cleaning up the cross street intersections, curb cuts and gutters to make it safer for people to park or pedestrians to get to their destinations.

Looking up and down F and G Streets Thursday, it was great to see how clear it was, hours before businesses opened.  Salida Public Works thanks the citizens of Salida for helping keep the streets clear for this storm and making their work possible.

In return, all of us should tip our sheepskin-lined, aviator-flap hats to those who work throughout the long cold nights of winter, making it possible for minimal disruptions to our daily routines during snowstorms.  Compared to some other Colorado mountain towns, we are the “Banana Belt of the Rockies“, but we do know a thing or two about snow removal and we need the moisture.  Pray for more snow!