Who Attacked a Giraffe in Salida’s Downtown?

Near nightfall on Thursday, Jan. 23, Salida businessman Ken Brandon, owner of Box O’ Bubbles, was attacked as he walked back to his property on Second St.. The fact that he was dressed in a tall giraffe costume, after having appeared with other artists at Longfellow Elementary School for a Literacy Night event, is beside the point. Two question could be asked; who attacks a giraffe and who attacks someone in downtown Salida?

Touring the space before the school event, Brandon, a member of the Salida Council for the Arts, said he noticed one of the art classrooms featured many images of giraffes, the teacher’s favorite animal. So he thought it would be appropriate to wear the tall “giraffe in a suit costume” familiar to many Salida residents. Salida Council for the Arts had been invited to the event, attended by hundreds of students, because it had an art theme. Students wrote about and asked questions of the artists and the Salida Circus also performed. 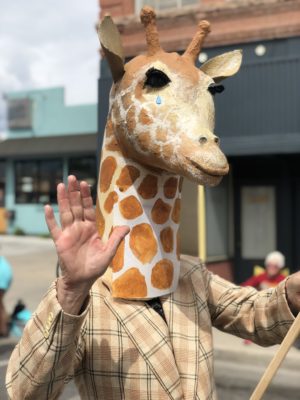 Brandon said he was walking back from the event in costume, taking care because at about that time it was starting to get dark. A friend driving by stopped their car at about F and Second St., and offered a ride, but he declined, saying he was pretty close to home (He added that he would have had to removed the head to be able to fit into a car)

Brandon said he had walked by other offices on 2nd St., and on to his property, when suddenly he was struck from behind, forcefully enough to nearly cause him to fall. He was bent over from the blow and dazed.

Witnesses from the Elks Lodge across the street came over to see if he was all right. He asked them, “What happened?” and they told him a man had come running up, struck a blow to the head of the giraffe costume, and then ran away south down E St.

“The fact of where I was, at the far end of the block; that person had to have followed me,” said Brandon. “[they] must have seen me at F Street and then followed me, clear down.” He noted there isn’t much activity on that block at that time of night.

A Salida Police officer came to the scene to investigate, and made sure that Brandon was uninjured. Asked him if he would want to pursue charges if the perpetrator were caught, Brandon said he didn’t think so, since he wasn’t injured, but the officer did noted there was property damage. The blow was hard enough to punch a hole in the giraffe head.

There was not a police report number assigned, so the Sheriff’s Department records department did not file a report. The reason for the attack by the male suspect is unknown.

Brandon, known for his talent at creating such costumes for event like the 350 Central Colorado Earth Day Parade of the Species, has made the best of it, He has added a bloody bandage to the back of the giraffe head. But he admits it made him feel a little unsafe knowing someone would take the risk of attacking someone on the street, perhaps with the intent of causing injury.

“Every time I put that costume on, that’s what I’m going to be thinking about,” said Brandon.