Kick the dust off your boots and prepare for a countrified rock ‘n’ roll extravaganza Friday, April 12th as Halden Wofford and The Hi*Beams headline a very special evening at The Lariat in Buena Vista. Starting at 8:30 p.m., Wofford and The Hi*Beams will serve as musical masters of ceremony (and Guinea pigs) for the highly anticipated public christening of The Lariat’s newly renovated sound system. 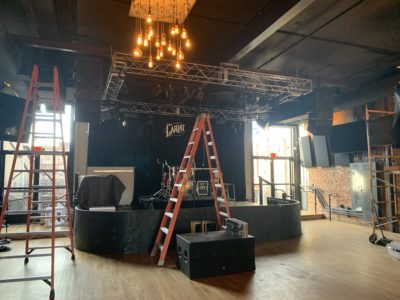 The Lariot in Buena Vista will introduce its new sound system to Chaffee County on Friday evening, April 12, leading off with Wofford and the Hi*Beams, said by many to be the best honky tonk band in the state.

Hailed as the best honky-tonk band in Colorado, Wofford and The Hi*Beams have been brandishing their distinct brand of country rock across the country for the better part of the last two decades. Born in Los Angeles, but bred in Fort Worth, Texas, Wofford stuck to a strict diet of Southern rock ‘n’ roll and blues growing up.

“You don’t get out of high school if you don’t listen to a certain amount of hours of Lynyrd Skynyrd and AC/DC,” Wofford chuckled.

It was only a matter of time before “the rattle of a ‘73 Barracuda fused his [Wofford’s] brain cells into a receptor for Honky Tonk and Western Swing musical compositions”, according to the band’s official website. Immediately, Wofford began crafting his own gritty, yet refined style until he ditched the Texas heat for The Mile-High City in 1995.

In no time, Wofford’s white snakeskin cowboy boots began appearing everywhere from local bars to American Legion Posts, but he just didn’t have the support he needed. Four years later, Wofford’s prayers were answered when an opportunity to join local Denver powerhouse The Hi*Beams presented itself.

The marriage of Wofford’s authentic grit and The Hi*Beams’ refined country swagger immediately carved and filled a much-needed niche in the country rock and western scene. Influenced heavily by the likes of Don Gibson, Cindy Walker, and Gillian Welch, Wofford’s authentic and relatable songwriting is the keystone of The Hi*Beams’ enthralling sound.

When asked about his songwriting process, Wofford let out a raspy chuckle. “Usually something makes me laugh and I sit down and start writing,” revealed Wofford. “Many times, a phrase suggests a melody.”

Delivering in-your-face blues while remaining firmly planted in western and country traditions, Wofford and The Hi*Beams are contemporary, yet familiar.

“We’re Rocky Mountain Honky Tonk. A fusion of Texas and California. You start to lose consciousness at altitude and things go a little faster,” said Wofford through a throaty laugh.

Rooted in tradition, it is only fitting that Wofford and The Hi*Beams will facilitate the sonic reopening of The Lariat this Friday.

“It’s such a great opportunity. It’s an honor. Hard to even describe, it means a lot,” beamed Wofford. Th band is no stranger to Buena Vista. The Lariat holds a very special place in the hearts of Wofford and The Hi*Beams.

“We love that bar, it’s so great. It’s a really positive place. It’s perfect for bands. Fits like a good pair of boots,” recalled Wofford. It’s no surprise the feeling is more than mutual.

“I think they’re the best honky tonk band in the state,” said Lariat co-owner Cort Johnson. For Johnson, upgrading the sound system at the Lariat isn’t just about the sound, but the experience. “I think it’s magical. Music is in the realm of human experience, all the things that make up life. It’s almost spiritual to me,” Johnson admitted. “What’s really powerful is when you share it.”

Since acquiring The Lariat in 2015, Johnson has strived to create an environment that fosters fellowship and camaraderie.

“Respect your elders and eat your beans,” laughed Wofford.

For more about the Lariat new sound system visit: https://arkvalleyvoice.com/the-lariat-drives-music-scene-in-buena-vista-with-state-of-the-art-sound-system/