“’Women Who Rock” nominations are underway

The last week of March is the final week for nominations for “Women Who Rock”, a contest put on by Salida’s community radio station KHEN-LP FM. The deadline for candidate submission is March 31. 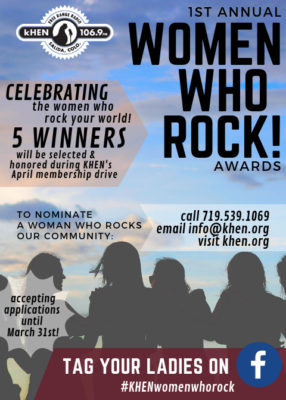 KHEN’s board chairwoman, Leslie Matthews, said the idea behind the “Women Who Rock” campaign was to highlight women who are working to create change and opportunity in Salida.

“A lot of women in our town who are shaking things up,” said Matthews. She notes, however, that the nominees can come from anywhere in Chaffee County. There are already 30 nominations posted, but more are welcomed.

Five winners will be chosen from the nominee pool, and each of the winners will have a featured hour on the KHEN on-air membership drive, that runs from April 10-12. Those five will also be honored at a fundraising party, “Rock the Night Away,” at A Church in Salida April 27.

Those wishing to nominate a “Woman Who Rocks” candidate can go to www.khen.org. To complete a short essay form. The nominating committee will read all the essays as part of the selection process, and members of the public can also vote online at KHEN’s Facebook page.

A complete photo gallery of the current nominees is available online at www.khen.org/2019-women-who-rock-top-nominees. Matthews says that this year’s contest will be the inaugural event and that the nominating committee for next year’s contest may be composed of this year’s winners.