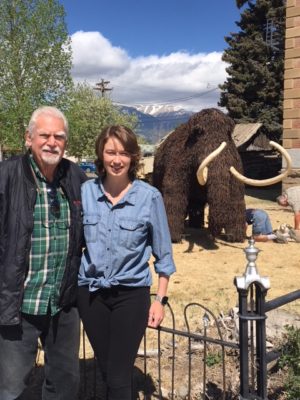 They’re alive! A woolly mammoth was sighted in Buena Vista this week – or at least a life-size model of the 6-ton beast.

Even Chaffee County commissioners were pulled from their regular meeting in the Buena Vista School District board room Tuesday morning when an animal, thought to be extinct, arrived next door at the Buena Vista Heritage Museum. Meeting attendees streamed out the door to see the creature that vanished from the earth 4,000 years ago.

The woolly mammoth, which in its day stood nine- to 11-feet high, was moved off the transport and onto the lawn of the museum, prompting curious onlookers to gather to watch the installation.

“It’s a way to announce that there are new exhibits at the Buena Vista Heritage Museum,” said former executive director Tom Thomson, leaning on the fence as volunteers positioned and secured the replica of the giant creature on the museum’s lawn “so that it doesn’t wander off.”

“Our new season begins this weekend, opening day is May 19, and we thought this would be a great way to promote the museum.”

The museum is planning the weekend as appreciation days for local residents, with weekend hours from 1:00-5:00 p.m. this Saturday and Sunday.

The life-size replica of the woolly mammoth was created by local artist Warren Schoedel. The artist had originally planned to loan the mammoth, but recently made the decision to donate it to the museum. The timing, according to new museum Director Kiki Lathrop, couldn’t be better.

“We’re excited about two brand new exhibits this year. We have created a new mining exhibit that takes people inside a mine, much like the locally famous Mary Murphy Mine here in the county, and it covers the history of other mines in central Colorado. It helps explain how the growth of mining shaped the history and development of our area.

“The second new exhibit is a cave exhibit that we’ve coordinated with the Fluorescent Mineral Society, an international organization of professional mineralogists, gemologists, amateur collectors and others who study and collect fluorescent minerals. That exhibit will help visitors understand the geology of our region.”

According to Wikipedia, “the woolly mammoth is an extinct species of mammoth that lived during the Pleistocene epoch, and was one of the last in a line of mammoth species.” It would have been right at home in Chaffee County, which was part of its North American range.

The extinction of this ancestor of the modern-day elephant may not last. Based on recent genetic advances, scientists say they are on the brink of resurrecting the ancient beast in the lab. A team of Harvard scientists announced late last year that they are leading the “de-extinction” effort, just two years away from creating a hybrid embryo in which mammoth traits would be programmed into an Asian elephant.

While the pachyderm on the lawn may be attracting  much of the attention this weekend, it’s what’s further from the ground that draws the attention of members of the Buena Vista Heritage Society. The museum was recently awarded a $145,000 grant to put a new roof on the historic building that houses the museum.

The group has just applied for a $200,000 grant to repair the historic cupola and cornices of the museum building, which began life as the historic Chaffee County Courthouse. Word on whether it has received that grant will not come until fall.

In the meantime, not only does the museum own a woolly mammoth, Lathrop says he’s going to need a name. While Morris the mammoth has a certain ring to it, Lathrop says a little girl who happened by during installation on Tuesday had another idea.

“I asked her what she thought his name was, and she said ‘Snowball.’ We’ll be looking for name suggestions from the community.”

The Buena Vista Heritage Museum is one of three properties managed by the Heritage Society, including Turner Farm and the Depot on U.S. Highway 24 in central Buena Vista. More information is available at www.buenavistaheritage.org.