The recent kerfuffle over a proposed parking lot for the east side of the Chaffee County Administration Building at 104 Crestone Ave. in Salida centered on the potential loss of both open space and six heritage elm trees that would need to be removed to construct the parking lot.

The county has received considerable citizen objection to the project, which moved forward largely unnoticed with staff and contractor input. At the point the project became public knowledge, a formal bid process was already underway. Those bids will be opened during the May 12 Chaffee Board of County Commissioners (BoCC) meeting. 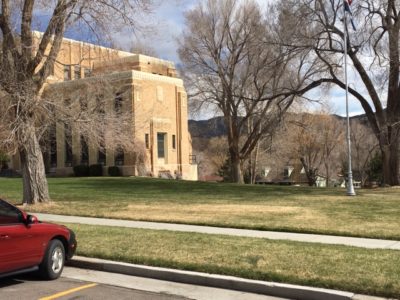 A proposed project to place a parking lot on the east side of the Chaffee County Administration Building at 104 Crestone Ave. would remove six heritage elm trees and reduce the open space around the county building. It has received considerable public objection. (Photo by Jan Wondra)

A solution has presented itself in the form of an offer to the county from First Presbyterian Church of Salida; to use their upper parking lot for weekday use instead of creating a new county parking lot.  In an April 30 letter addressed to the Chaffee Board of County Commissioners and the Chaffee Director of General Administration Bob Christiansen, from Clerk of Session Barbara Snyder,  the proposal was outlined.

The church’s preliminary analysis concluded that it had a potential solution that could benefit both the county and the church.

“The church has a gravel parking lot directly across from the corner of the County property that we estimate could accommodate between 20 and 22 parking spaces. This would, of course, require some further investigation, but preliminary measurements indicate this capacity would be possible with proper engineering and verification of the exact western property line.”

According to the invitation to negotiate some agreement over the church’s lot, one of the conditions would be to limit county use to weekdays only.

Also, according to the letter, a lease agreement would require the county to make the improvements, including the paving, any adjustments for drainage requirements, and a fence along the property line if requested by the neighbor. Rent would need to be established with reasonable annual increases and liability insurance to protect the church. 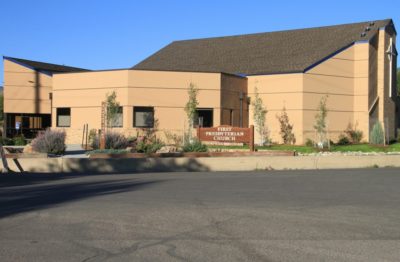 According to the offer letter, there are advantages to this approach.  “First, the cost will be significantly less than the cost of the current parking proposal. Second, the county will eliminate community concerns about the loss of important trees and open space.”

“Third,” continues the proposal, ” full use of land already dedicated to parking but currently only used part-time is an environmentally sound and positive use of scarce land. Fourth, the church parking lot feeds directly into the Poncha Blvd. crosswalk, which, when more prominently marked, would ensure pedestrian safety and a very short walk to the courthouse.”

There has as yet, been no formal comment from the county to the church’s proposal.