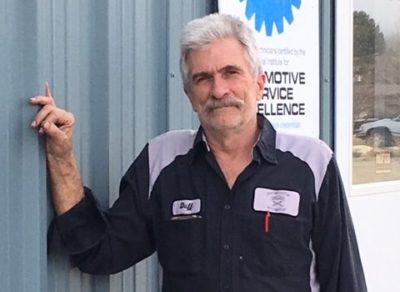 Duff Lacy was elected mayor of Buena Vista with 74.2 percent of the vote.

The results of the Buena Vista election for mayor and four board of trustee positions are in. Duff Lacy has been elected mayor, receiving 860 votes compared to his opponent Jed Selby’s 289. Lacy’s share of the total vote was 74.2 percent.

Taking new positions as trustees are Libby Fay and Norman Nyberg, while incumbents David Volpe and Cindy Swisher have been reelected. Swisher was originally appointed as a trustee when Phillip Puckett was hired as town administrator.

“Because I was in an appointed position, this means so much to me,” said Swisher, who came to city hall at 7 p.m. to await the results. “It’s like now I belong on the board, and I want to represent the town well.”

“I’d say the turnout for a candidate election was superb. We had 30 people walk in today and register to vote. Just today, we got 15 ballots in the mail and 287 people walked in the door of town hall to vote.”

Barnett reminds voters that the April 3 results are still considered unofficial. “That’s because we have to wait until April 11 to receive military ballots and there are usually a few discrepancies, like missing signatures, that we have to clear up. In our process we always hold back five ballots to the end in case there are close results. But the leads are substantial, so I’d say this is a clear result, although it won’t be official until April 11.”

This was Barnett’s first experience running a municipal election and she is pleased with the process. “Until now I’ve handled county election processes, and I think this town election went very smoothly.”

Asked about important challenges facing Buena Vista, Swisher said, “I’m too excited to think, but housing is one of the things we have to work on. I came out in favor of The Farm (the 90-unit housing development for the town’s workforce) and we need more housing.”

Source: Abstract of Votes Cast and Statement and Certificate of Determination