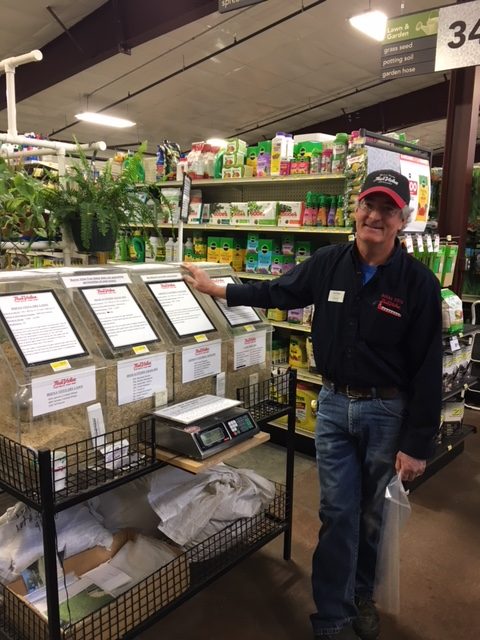 Residents of Chaffee County who have grown up here, as well as those who moved here from the Front Range or from out-of-state, are known to comment on the difficulties of growing lawn grass in the Upper Arkansas Valley.

Here, Kentucky Blue Grass seems to have no place, and many residents struggle with the conditions of poor soil nutrients, high altitude and water shortages. One local man with longtime experience in developing grass seed mixtures seems to have created more than one recipe for success.

Ask Gary Ludwig what’s so special about his grass seed, and he’s modest. “Well, the seed mixes have been developed for our conditions here. I mixed them to give people an opportunity to actually grow a drought-tolerant grass cover matched to the resources of water and soil nutrients that we have here in Chaffee County.”

Ludwig’s special grass seed mixtures are sold only at Buena Vista True Value. He developed the grass varieties many years ago while running his family business, Pleasant Avenue Nursery, in Buena Vista, where he sold native trees and shrubs. He closed the nursery in 2014, and in 2015 went to work at True Value. He brought his special seed mixes with him.

There are four very different mixes: two that combine all native grasses and two that combine native and introduced species. All are what Ludwig calls “re-vegetation grasses” designed to re-cover areas disturbed by construction or areas of vegetation that aren’t growing well at this altitude.

“I developed the mix I call ‘Game Trail’ as a direct response to the request for an all-native grass mix from the developers of the Game Trail subdivision. They didn’t want any introduced grasses at all. So I went up there while the grasses were in flower and collected native flowers. I brought them back and put them under a microscope to identify the grasses that were already there. Then I created a mix of nine native grasses and four different wildflowers, working with my long-time seed company partner.”

Ludwig said he took classes to acquire his base knowledge and has coupled that with years of experience. He has a few pieces of advice to area residents attempting to grow any kind of grass: “Adjust your expectations. The key is to understand that based on your resources, the same grass mix will look different under different conditions.”

Ludwig created what he calls the ‘Buena Vista Dry Lawn,’ a mix of 100-percent non-native species that his testing has shown works well here. The mix of three grasses grows 12- to 15-inches tall in clumps of bright green when planted on soil to which compost has been added. It is reasonably drought tolerant, requiring watering only every 10 days or so, and it needs little mowing except to remove the seed heads.

One customer sowed it but added compost and watered it once a week, yielding a green space that is more meadow-like. Another customer sowed the same seed in an area without irrigation, where it yielded green grass mounds but not a solid cover. Ludwig said both customers were pleased because they understood that conditions would determine results.

“This mix is great to re-vegetate an area that has been disturbed, like a construction site. It is designed to grow vigorously enough to compete with weeds and overtake them. Basically, I mixed it to resemble the native cover that existed before construction began.”

The High Altitude mix, a combination of eight grasses mixed for high elevation ranging from 8,000 to 11,000 feet.

Along with detailed descriptions of the grass mixes available at the seed bins at the store, Ludwig has prepared a written recipe for success with the grass mixes. He recommends planting between March 15 and Aug. 31 for germination in the same year and to plant fall seeds in October, adding “Never sow grass in September.

“Seed and soil contact is one of the most important steps to success. If your seed is lying on top of the soil, you’ll have poor germination. The soil should be hand-raked with the freshly sown seed.”

He also reminds people who are planning to sow grass that weeds will germinate and grow alongside the new grass plants, so the weeds should be cut or mowed to allow the grass to get ahead of the weeds.

“Most weeds are annuals that will die at the end of the season. Then you’ll have grass, which is a perennial and will return stronger the next season.”