Late Friday afternoon, the Colorado Independent Redistricting Commissions Congressional District staff released their new map of the eight Colorado districts. It looks quite different than the one presented early this summer before the 2020 Census numbers were released. 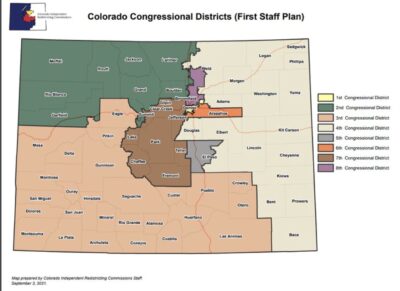 In this latest map, Chaffee County jumps from potential representation within a broad swath of Western Colorado (the first redistricting proposal), back into a central mountain District 7 that would include: Chaffee, Teller, Fremont, Park, Lake, Summit, Clear Creek, Gilpin, and Jefferson counties. Notably absent – El Paso County, which is now its own district.

One overriding number lies at the heart of redistricting: each of the eight newly-redrawn Colorado districts is supposed to represent 721,714 citizens so that each is weighted equally.

According to Colorado Public Radio, which did one of the first news reports on the proposed map, the biggest change is to the 3rd Congressional District. The current configuration is a giant hook encompassing the entire Western Slope and Pueblo. But the new staff map transforms it into a southern and western district that only reaches as far north as I-70, including Mesa and Eagle counties, and then stretches east past Pueblo to include Crowley, Otero, and Las Animas counties.

This change means the Western Slope would be split into two districts, with the northern portion ending up in the 2nd Congressional District. Under this configuration, the current 3rd District Representative, Republican Lauren Boebert, who lives in Garfield County, would find herself drawn into CO-2. That potentially sets up a race between her and the CO-2 incumbent, Democrat Joe Neguse, rather than the imagined face-off against State Senator Kerry Donovan, who is leading in a field of candidates to run against Boebert.

For the latest maps visit as they change, visit: https://redistricting.colorado.gov/content/2021-redistricting-maps

Our AVV Sept. 3 story on redistricting covers the final two weeks of redistricting hearings. The final maps have to be at the Colorado Supreme Court by no later than September 28.