The article which ran last week, outlining the reasons why Fremont County chose to adopt a resolution to become a 2nd Amendment Sanctuary County, included comments that strike at the heart of what most of rural America is facing: now and for the foreseeable future. These issues will persist as urban areas progressively sprawl, continuing to drive social norms and spur technological advancements. Fremont County Sheriff Allen Cooper talked about the mental health issue that law enforcement has to deal with on a day-to-day basis. The Fremont County Commissioners spoke to the Constitutional issue: specifically, their view of how Colorado’s “Red Flag” law infringes on the 2nd and 4th Amendments.

In a series of three articles over the next two weeks, Ark Valley Voice will focus on the issues surrounding Colorado House Bill 19-1177 Extreme Risk Protection Orders, otherwise known as the “Red Flag Bill.” The articles will take a closer look at what these issues mean for rural America and Chaffee County in particular. 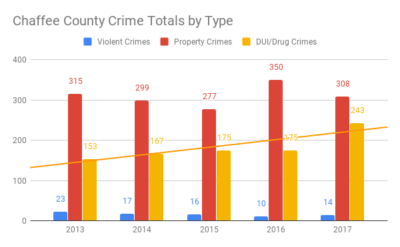 Once considered more of a “city” problem, mental illness and some of the well established underlying causes has an impact on both the community and the criminal justice system. It would be hoped that in Chaffee County, there will be some measures that local law enforcement and other community leaders can tackle the mental health issues in the county.

The mental health issue that has been plaguing law enforcement for decades. Since the 1970s, American society, and subsequently the Criminal Justice System, has taken on a more punitive stance to crime, despite some of its glaring underlying causes. In rural America today, those underlying causes are chiefly rooted in two, interrelated causes: mental illness and substance abuse. From experience as a law enforcement professional, when it comes to persons involved in the criminal justice system, very rarely do you find one without the other.

According to the National Institute of Health, “the number of adults involved in the criminal justice system has soared from about 1.8 million in 1980 to 7.3 million in 2007, due largely to prosecutions of drug-related crimes and drug-addicted offenders.” 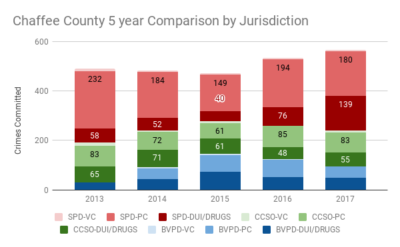 Additionally, the National Alliance on Mental Illness (NAMI) website reports, “Two million people with mental illness are booked into jails each year. NAMI reports that nearly 15 percent of men and 30 percent of women booked into jails have a serious mental health condition.” Whether it was the three strikes laws introduced in the 1980s or mandatory sentencing, numerous high profile communications campaigns have solidified societies’ punitive stance toward individuals dealing with mental health and addiction issues in the mainstream psyche.

Though comparative statistics are not available at the local level, results from the recent surveys done by the Communities That Care Program indicate Chaffee County youth are predisposed to higher rates of substance abuse, depression and marijuana. In other words, as Cooper alluded to, we are not immune to the very same problems that confront the rest of the country especially, within the criminal justice system. 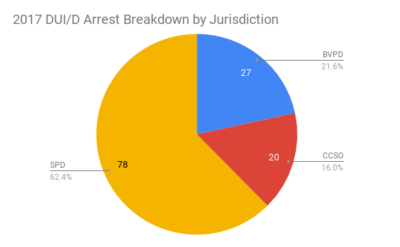 Essentially, law enforcement has had to become untrained psychologists when dealing with many suspects. As a response to this reality, most large departments and state agencies now devote significant portions of their training curriculum to mental illness awareness and training. In fact, the Colorado State Patrol Academy devoted a full two days to mental illness training in 2014 (which I attended). The training consisted of awareness, understanding and practical exercises with volunteer actors manifesting the most common and dangerous mental illnesses. This initial training was then followed with mandatory annual training. There was also the option of becoming part of a Critical Incident Team and receiving more extensive training responding to mental illnesses during critical incidents.

Here is the problem for rural counties: few small/rural departments and agencies have the funds, time or resources to devote this kind of time to mental illness awareness much less proper response. Compounding this issue is the lack of community resources to assist law enforcement. 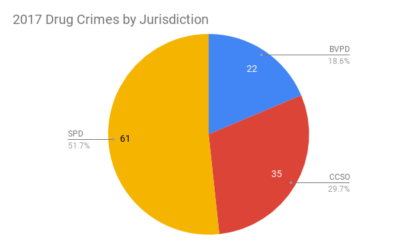 Most urban areas, through necessity and reality, now have numerous, well used mental wellness programs and substance abuse treatment facilities. Compare this to rural areas, where very few mental wellness options and community resources are available, and those that are available, are often woefully underfunded. Further undermining these efforts, are criminal enterprises which recognize and take advantage of these funding and resource shortcomings.

One thing is certain: this issue is likely to persist and fester if not confronted by the entire rural community. As demonstrated by so many other communities, the only successful approach seems to be through an unfiltered and thorough understanding of the specific local issues and the underlying causes of those realities. Then clear, practical and realistic community-wide efforts will be required to affectively measure these issues.

Though not specific to the mental illness issue, Chaffee County agencies face what the following graphs show the most recent drug and drug-related crimes statistics in Chaffee County are, according to the interactive website that State of Colorado’s Crime Statistics department. The graphs are arranged by criminal activity type and locality.

Upcoming in the second article: A look at the dangerous precedent being set in as the county become Second Amendment Sanctuary Counties, around the west and now increasingly in Colorado.