The Answers to What Russia is doing 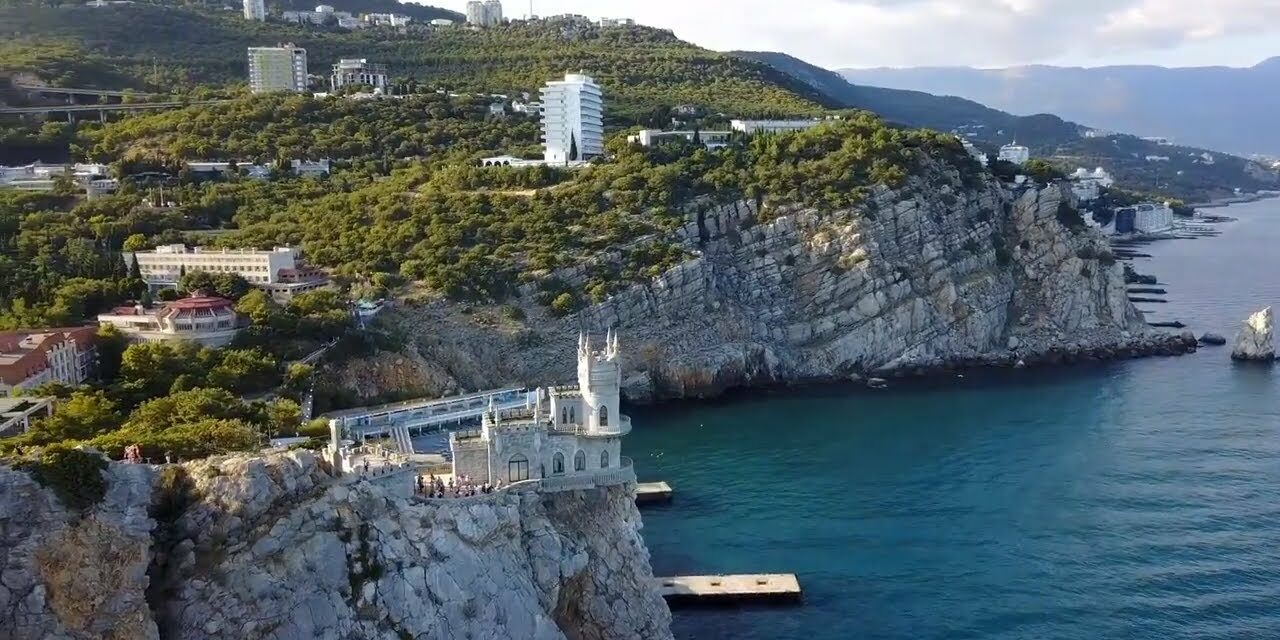 As the holidays are upon us, few Americans are paying attention to the rumblings of Russia on the borders of Ukraine. After all, it is halfway around the world, Ukraine isn’t yet a NATO ally, it’s Christmas, and Russian President Vladimir Putin is just making idle threats. Right? 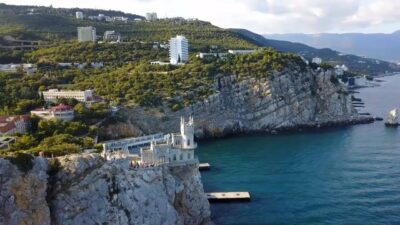 The coastline of Crimea, with retreat built by Josef Stalin. Image by Dreamtime

The grievances that Putin voiced yesterday in a four-hour-long press conference with his country’s (captive) media are the latest concerning signs of what he plans to do next. Russia is looking for provocation. With more than 100,000 troops and heavy tanks and missiles poised on the eastern edge of Ukraine, Putin may well make a move during the western world’s holidays.

After all, Russian Christmas is on the Russian Orthodox schedule two weeks after ours. While the rest of us are toasting each other, Putin may do — something. Then he can sit back during Russia’s holiday season and bask in the glow of having stuck it to the West.

He’s done it before. With 27 years of experience dealing with Russia, I can honestly say that what is going on is very Russian, and very in character.

Just one example. In Dec. 2012, I was one week into my tenure as the National Chair of Families for Russian and Ukrainian Adoption Including Neighboring Countries (FRUA). In the week between Christmas and New Years, Putin without warning, shut down adoption of Russian orphans by Americans.

Only the previous summer the U.S. and Russia had signed a new intercountry adoption agreement. Thousands of orphan children were in process and hundreds of American adoptive families were in Russia at the time. For days we worked with the U.S. Department of State and with the hundreds of parents in-country, who were in their final court proceedings of adoption. The children were already calling their new parents Mama and Papa. Some parents who had already signed their international adoption paperwork made it out with their children, quite literally escorted to the Moscow airport by U.S. officials so they wouldn’t be stopped. Hundreds of others were caught in limbo, never being able to finalize their adoptions. Hundreds of children never got parents.

A history of distrust and expansion

When the Soviet Union fell in Dec. 1991, and the Eastern European countries held captive within the Soviet bloc made a mad dash for the West, Ukraine possessed a major stockpile of nuclear weapons. We, meaning the North Atlantic Treaty organization (NATO), persuaded Ukraine to divest those weapons with the promise that the West was now willing to help defend them.

Estonia, Latvia, and Lithuania, as well as Poland and the Czech Republic, joined NATO. Ukraine and the Republic of Georgia have been promised membership.

Fast forward 25 years and Russia, having moved from a fledging democracy to an authoritarian dictatorship that presents as a sham democracy, began to blame the West for its own failings. At that point, it began to do what it always does.

As detailed in “Russia and the Russians,” at any given time in its nearly 1,000-year history, Russia is always doing at least one of these three things:

These are long-held beliefs and they are goals that get used interchangeably. Never mind that in landmass, Russia crosses nine time zones and is the largest country in the world. It continually seeks to expand its influence and coddle its inferiority complex. Of course, give it a few hundred more years of global warming and we could see all that land in Siberia planted in wheat.

In 2007 Russia launched a massive cyberattack on tiny Estonia. It was the first, but by no means the last cyberattack on the Baltic nations of Estonia, Latvia and Lithuania that border the north-western edge of Russia along the Pskov region. It has continued to instigate cyber-attacks and covert and social media efforts to interfere in the free and fair elections of these young democracies.

In 2008 after a similar sword-rattling, Russia invaded the South Ossetia Region of the Republic of Georgia and annexed it, claiming it was protecting the ethnic Russians of the region.

From 2010 to 2012 Russia pretended to cooperate on a new intercountry adoption agreement to provide families for more than 600,000 orphans in Russian institutions. Just after it was signed, it slammed the door shut in Dec. 2012, leaving those children in Russian institutions and creating a political impasse.

In February and March 2014, following the Ukrainian revolution and election of a pro-western President in Ukraine (ousting Russia’s hand-picked pro-Russian president), Russia invaded and subsequently annexed the Crimean Peninsula from Ukraine. Again – – they announced that they were uniting its Slavic peoples, and besides, as Putin announced,  “Crimea would forever be part of Russia.”

That first move was part of a wider Russo-Ukrainian conflict. Soon with Russian troops massed on the border of eastern Ukraine, they advanced into Ukraine, again claiming that this region is historically part of the Russian empire and that they are merely uniting the Russian-speaking peoples.

Over the past several years, Russia has used the threat of shutting down its oil pipeline that runs through Ukraine to Europe as a wedge; always choosing the frigid winter months to attempt to get concessions.

As the Soviet Union broke up, Belarus remained aligned with Russia, and remains as the last complete dictatorship within the European sphere in the former Soviet bloc. They recently forced a commercial airliner flying through its airspace to land in their capitol of Minsk and forcibly removed a journalist who dared to criticize the dictator.

The West, for its part, remains stalwart in its support of those counties which broke out of the Soviet bloc and moved closer to the West. It has been quietly rearming Lithuania with Javelin missiles, for instance, and has aided in the protection of recent Baltic elections.

In what has become a familiar tune sung by Putin, he is blaming the West for tensions over Ukraine, despite the fact Russia has been the primary aggressor. Just in the past few days, he’s taken to demands that NATO pull back and not defend the Eastern European countries and that countries like Ukraine and Georgia be dropped from membership consideration.

According to former Ambassador to Russian Michael McFaul, standing up and calling Russia’s bluff is the right thing to do. “We don’t want any doubt in his mind about our commitment to our NATO allies,” said McFaul.

But he sounded a note of alarm that indicates all of us should be watching Russia over the next few weeks. If Putin is “trying to scare us by acting crazy,” then he’s “succeeding [with] me,” McFaul said.

On Tuesday, McFaul said Russian President Vladimir Putin’s increasingly hostile rhetoric towards Ukraine is frightening and strikes a distinctly unsettling tone. “I’ve listened to more Putin speeches than most. I’ve been in meetings with him for five years,” McFaul said of Putin’s remarks on Tuesday. “This speech is something different — Putin’s list of completely fabricated threats here is truly striking … and scary.”

Putin appears to be looking for an excuse to invade; manufacturing the crisis with Ukraine, a former Soviet republic, and is blaming the West for tensions catalyzed by the Kremlin’s aggression.. In his latest threats regarding Ukraine on Tuesday Putin ramped up the threats and Russia’s defense minister baselessly claimed that U.S. mercenaries were in eastern Ukraine and preparing a chemical weapons attack. “The claims are baseless,” said McFaul.

“What the U.S. is doing in Ukraine is at our doorstep … And they should understand that we have nowhere further to retreat to. Do they think we’ll just watch idly?” Putin told Reuters. He went on to add that Ukraine belonged to Lenin anyway; not a good message to a sovereign country.

Yes, we are safe, so to speak, in the U.S. But we should all watch what Putin does next.

Editor’s Note: AVV managing Editor Jan Wondra has 27 years of experience dealing with Russia and the former Soviet bloc countries related to inter-country adoption policies and adoptive family support. In March 2014 she was one day from meetings at the Russian Embassy regarding Russian adoption negotiations when Russia canceled the meetings and invaded Ukraine. She now leads the FRUA National Advisory Board.