What Exactly is the Purpose of Chaffee Patriots?

A private group formed on Facebook on Aug. 7 called Chaffee Patriots. It was formed less than 24 hours after Ark Valley Voice ran a story about the “something” that happened in Buena Vista on July 4. In less than a month, it grew to more than 700 members. 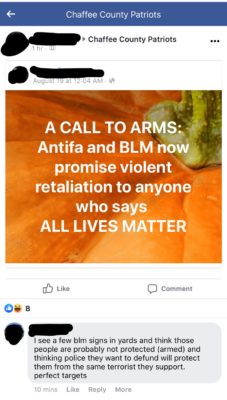 September 5 call to commit violence on the Chaffee County Patriots Facebook page. AVV has blocked out the name of the poster in the featured image, but we know the identity. The claim in the main visual of this post is a false piece of disinformation.

The criteria for joining the closed group includes the willingness of its members to arm themselves and be ready to “defend their values”. While the general public can’t see the content, Ark Valley Voice learned that Chaffee Patriots is filled with right-wing memes advocating violence and hatred, disinformation, and expressions of threatening attitudes to those moderates and liberals with whom they apparently disagreed.

Who would belong to something like this? A lot of our neighbors, apparently.

In little more than three weeks, the group’s membership grew from zero to more 600, then to more than 700 the following week. It includes no less than 17 Chaffee County law enforcement personnel and a dozen people from the Department of Corrections.

Facebook has shut down other militia social media sites, including Three Percenter and Boogaloo militias groups and it appears many of these members gravitated toward new “patriot” groups. On Sept. 5, Facebook took down the pages of the right-wing group Patriot Prayer and its founder Joey Gibson, as part of efforts to remove “violent social militias” from the platform. 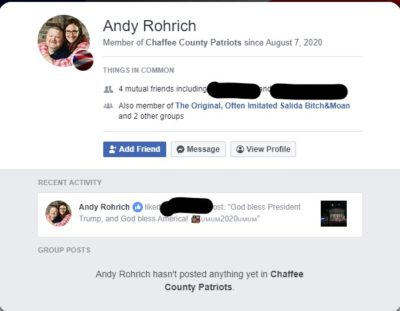 There appeared to be a presence in Chaffee Patriots of people with connections to the right-wing militia groups reported on by AVV earlier this year.

Chaffee Patriots doesn’t appear to have any party affiliation, but some of the comments echo supporters of President Donald Trump, who when referencing the 2018 White Supremacist rally and confrontation with protesters in Charlottesville, Virginia (where one protester was killed) said, “there were some very good people on both sides…”

The site includes multiple postings with violent posts/reposts on current events in other parts of the country, with “likes’ by Chaffee Patriots, including members of local law enforcement. One, a comment about the 17-year-old who used his (illegally possessed) AR-15 to shoot three protesters in Kenosha, Wisconsin, killing two of them, was ‘liked’ by local law enforcement.

Another post by a local resident said “I see a few blm signs [Black Lives Matter] in yards and think those people are probably not protected (armed) and think police they want to defund will protect them from the same terrorists they support. Perfect targets.” 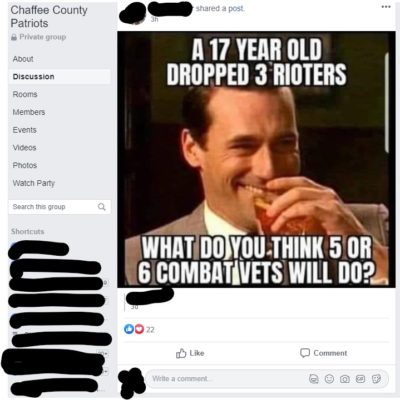 Violent meme promoting 17-year-old Kyle Rittenhouse’s shooting protesters. Comments from a group calling itself “Kenosha Guard” appear to be behind some of the more violent comments being reposted on patriot sites.

Chaffee Sheriff John Spezze and Salida Police Chief Russ Johnson are not members of Chaffee Patriots. AVV has confirmed that they had received invitations to join which neither answered. But members of their staff are.

“I’ve heard about them, but I”m not terribly familiar. I hear they posted about the rally last weekend,” said Johnson. “I don’t do social media and I’m not getting in the middle of politics. We’re not picking sides, we’re here to protect everybody who lives here or visits regardless of their political beliefs.”

He said that there probably were some members of his force who were members of Chaffee Patriots, but that what they do on their own time is their business. He added that his officers don’t do yard signs. 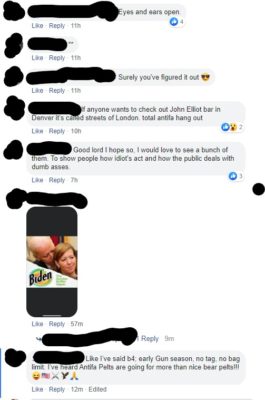 Spezze said, “I’ve heard of the group, but it’s not illegal to join. Sometimes law enforcement joins things for a reason, if you know what I mean.” He added that he remembers being invited but that he is too busy to join and that “Andy says he’s not a member.”

“I think it’s more a curiosity thing [with the department.]. I’d be very surprised if any of my people were involved, but I will talk with them. As law enforcement we have to be hypersensitive,” said Spezze. “I’m not taking this lightly…. I can’t tell them ‘you can’t be part of something,’ but it’s a good opportunity to remind my people you got to watch your stuff … What you do here follows you down the road and I will remind them to be cautious about what they join.”

He volunteered that this same local Chaffee Patriots group had asked him to talk at their meeting at the VFW this Thursday, but that he had turned them down. 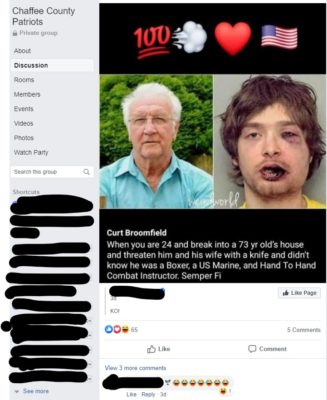 Widely shared misinformation. This story was actually from 2008 in England. Broomfield was not a U.S .Marine.

Buena Vista Police Chief Dean Morgan said “there are general town policies regarding social media things, as far as joining groups, we wouldn’t want people joining any groups that could bring discredit to the department, the profession or the town.” He said he had “seen what they posted and he believed its purpose was dedicated to the preservation of the constitution and individuals’ willingness to defend our communities.” But then he added, “I can’t speak to the content – it looks like political to me.”

When told about the threat contained on the site which appeared to reference Salida, Johnson said, “ I don’t know the person so I don’t know his thoughts. People say stuff all the time, there are comments on social media daily, and different people think differently. I can tell you if somebody feels threatened individually they can contact us or the sheriff and we will respond and taken appropriate action based on the circumstances.”

While Salida might well be an oasis, in fact, multiple sources across the country are beginning to point out the radical element in law enforcement. Sources at the Brennan Center for Justice say their research shows that racism and white supremacy and far right attitudes are actually hidden in plain sight right within law enforcement.

“No, what is it?” asked Chair of the Board of County Commissioner Greg Felt. “What is it they stand for?”

Commissioner Rusty Granzella said he was unaware of the group or what it stood for and neither was Buena Vista Mayor Duff Lacy, or Salida Mayor P.T. Wood. Commissioner Keith Baker said someone had just mentioned it to him, but he didn’t know what it was. “Where I grew up (in a rural area of the South) I’ve seen groups intimidate people and it’s not a good thing. I’m not saying that’s what this group is because I don’t know.”

“People have right to own a firearm, have a gun over the mantlepiece, in a gun cabinet or a gun safe to hunt, for sport, for personal protection in a responsible manner,” said Baker. 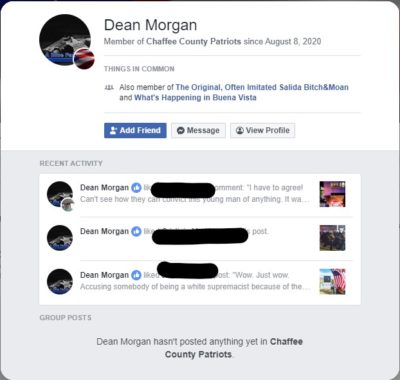 Baker added that “the vision most people tell me they have for our community is they want to feel safe and have a beautiful place to live and work and play. Safety in all respects is huge in this – if people feel threatened in any way, by an erratic neighbor, fear of famine, flood, fire, then that’s not feeling safe.”

“Our council and our government have worked really hard at addressing inequities in Salida,” said Wood. “Equality, tolerance, those are values that we hold very important.”

“We ask a tremendous amount from our law enforcement. We expect them to be able to deal with extremely tense dangerous, challenging situations, that escalate out of nowhere and respond with exactly the right amount of force, then de-escalate immediately as soon as they have the situation under control,” said Felt. “I have compassion and sympathy and I know they are under a lot of stress, but in this line of work, your words really matter. Whether elected or in a government department whether on the job or not, in terms of how people perceive you, the expectations are that our words matter.  Situations arise — like the one you’re writing about — I offer my support to law enforcement leaders and I expect that they will address whatever issues are connected to this situation.”

As a matter of safety, the question may be — should Chaffee residents be concerned?

Undersheriff Andy Rohrich has not yet responded to Ark Valley Voice request for comment, but when he does, his comments will be included in this article.