Sen. Michael Bennet fielded unscripted questions from attendees at a packed town hall meeting Thursday, March 29, in Salida, attempting to answer every question by extending his visit well past 12:30 p.m., when the meeting was scheduled to end.

When asked whether his recent vote concerning the Dodd-Frank Wall Street Reform and Consumer Protection Act was influenced by the corporate banking industry, Bennet replied, “Not at all,” then expressed worry about “misinformation” concerning his vote.

“I was on the Banking Committee and helped write Dodd-Frank,” he said. “But ever since we passed that bill, I have had rural credit unions and rural banks come to see me … and say, ‘Michael, we’re getting regulated to death as a result of this bill.’”

When challenged about the legislative process leading to the vote, Bennet remarked, “The starting point here was Donald Trump and the Republicans saying they wanted to repeal Dodd-Frank. They’re in charge. …

Bennet said the loss of those banks was due to consolidation that is partly related to regulatory costs. “This is not a bill I would’ve written, but I’m proud to stand here and say I voted for it.”

He then read from a letter sent to Missouri residents: “We strongly disagree with the claims that the Senate banking bill dismantles the Dodd-Frank law. We know this because we are the ‘Dodd’ and ‘Frank’ of Dodd-Frank. The purpose of this bill is to help credit unions and community banks that are in danger of vanishing. … Frankly these banks were never the problem.” 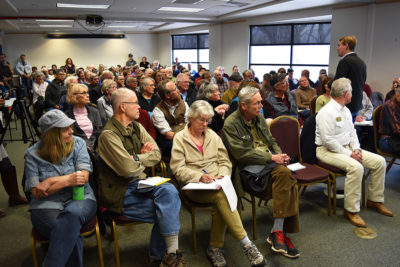 On the topic of gun control, Bennet said, as a result of Colorado tightening gun laws, 7,000 gun purchases were denied last year because of the state’s background checks. “Among those people were murderers, rapists, domestic abusers, people convicted of other violent felonies; and to me it’s impossible to argue that Colorado’s not better off with those people not having guns in their hands.”

Bennet also expressed support for public lands, including Browns Canyon National Monument, and acknowledged that public lands issues played a role in bringing him to Salida.

In fact, the series of events that led to Bennet’s Salida town hall meeting began in Utah with elected officials’ efforts to privatize public lands. Those actions prompted the country’s most economically significant outdoor recreation event to leave Salt Lake City in favor of Denver.

Bennet said he met Salida Mayor P.T. Wood at the Outdoor Retailer conference in Denver, where the mayor invited him to visit Wood’s High Mountain Distillery, “and that turned into this town hall meeting.”

A video of the town hall meeting is available here.