After 18 long months of work, the Buena Vista Historic Preservation Commission has reached the stage where it shared some of its findings with Buena Vista Trustees during a Feb. 11 work session. But the work is not done; the commission will incorporate Trustee’s edits for re-release by March 20, for public review and comment during an open public meeting. It hopes to deliver the formal draft recommendation document by early April 2020. 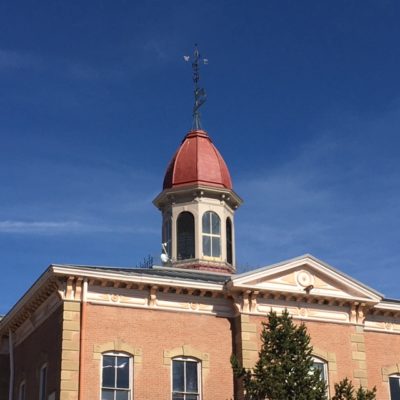 The historic roof lines and cupola of the Buena Vista Museum recently went through a historic restoration, returning the cupola to its original appearance. (Photo by Jan Wondra)

The commission was formed in 2018, because of the town’s interest in preservation and desire for real guidelines to fulfill the mandate of the Buena Vista Comprehensive Plan.

The goal: to maintain the architectural heritage of the community, protecting sightlines and the integrity of both historic structures, as well as the historic character of the main downtown area.

The process, begun in Sept. 2018 by commission leader Dan Cartwright, has been extensive and transparent. There have been four public hearing sessions, social media and email interaction from the public and input from Main Street property owners.

The boundaries of the historic area covered by the proposed guidelines are East Main, from U.S. 24 to the intersection with South Main, and one block north of Main to include the alleyways. The area roughly overlays the old town zone. “The thinking here was to start small, protect the key assets, and protect the old town before going bigger,” explain the commission members.

The document presented during the work session compared the proposed architectural design guidelines for the downtown area, against the unified development code (MU-MS). The draft recommendations from the Historic Preservation Commission:

Among the topics during the hour-long discussion, was a healthy debate over building heights of new construction on Main Street. Some members of the public advocated for more height, and others made the case to follow the commission’s recommendation to limit building heights for new construction to 30 feet. The rationale for that recommendation; it minimizes the difference between the historic one-story structures along the street, such as the Lobeck Bakery, and new buildings taller than two stories.

Those advocating for at least 35 ft. building heights (with a few asking for a maximum of 40 ft. for front-facing parapets) said that limiting new construction to 30 ft. buildings do not make economic sense for property owners. They pointed out that at that height, it was difficult to place a second-story apartment or condo unit above a retail space, which is important to the business decision to build in the first place.

Proponents of the draft guidelines talk about mass and scale – describing it as “the human scale of buildings.” They raise the feeling of walking down East Main and getting a sense of welcome. Commission members say they have studied building heights in 20 historic municipalities across the state and the scale averages about one and one-half stories tall.

Historically, Buena Vista’s building heights on Main Street have been limited to preserve sightlines to the majestic mountains to the west, as well as not to overwhelm the rooflines and cupola of the Buena Vista Museum, which began life as the Chaffee County Courthouse.

At present, say, commission members, the only local landmark buildings on East Main that are protected on historic registries are the old Jail House and Town Hall, the Court House and the old Mother’s Building. The only structure that is 100 percent protected is the Jail House.

The Historic Preservation Commission points out that the guidelines concerning existing landmarks intend to provide information to those property owners about accepted best practices, to help preserve their historic asset and its value. The guidelines are not at this time perceived to be mandatory.

Following feedback during the work session with Buena Vista Trustees, the commission is incorporating their comments and plans to have a draft recommendation ready by March 20. At that point, it will be released to the public, and a public meeting and comment period will begin.