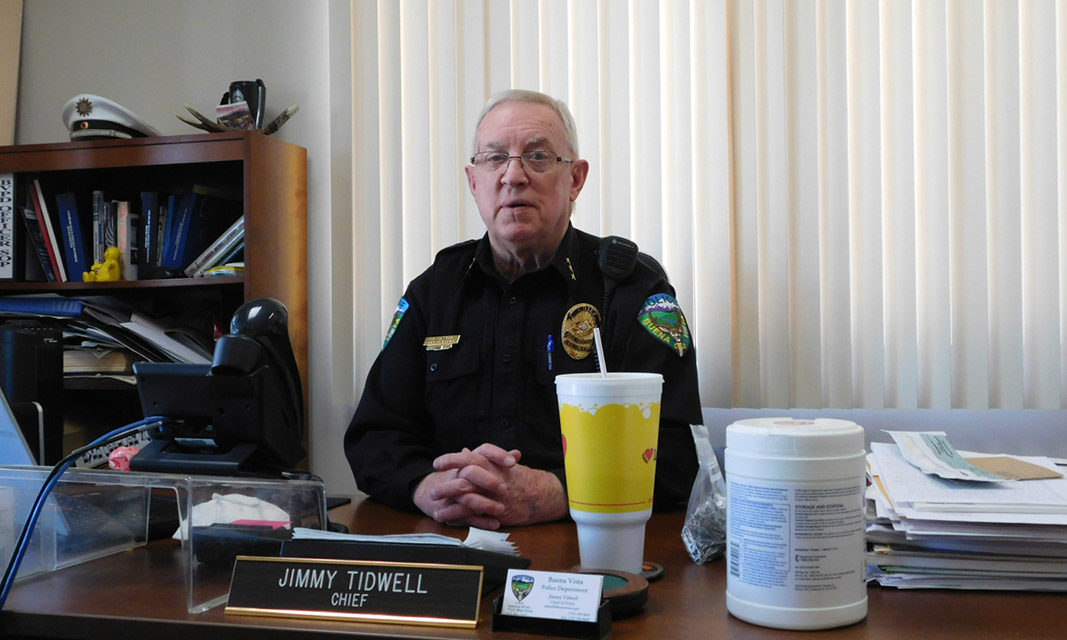 The walls in Buena Vista Police Chief Jimmy Tidwell’s office have gotten nearly bare, save for a giant doughnut that takes up most of the space above the door. A gift from local fifth graders, it’s one of many things bringing about sentiment these days.

July 25 is now officially Jimmy Tidwell Day, proclaimed by Buena Vista’s Board of Trustees on July 7. As Tidwell retires on July 23, the town is recognizing the police chief known for softening situations with compassion, common sense, and a few “uniquely Jimmy” phrases.

It’s been a long and mostly good 34 years of police work in Buena Vista, he says. By things being mostly good, he means a small town cop sees the highs and lows of a community up close and sees the trends that go with things like recessions, economic booms, and now, a pandemic. You watch kids grow up, and in Tidwell’s case, you see 33 high school classes graduate. You respond to fatal accidents and things that stick with you forever.

With all of that, “it’s been a really great experience,” he says. “There’s so much more good than bad.” A father of five and grandfather of seven, he says the kids in the community, especially the little ones, help balance out the tougher stuff.

As to why he’s leaving now, Tidwell says it’s time to pass the baton, spend time with family, tinker with his green chile recipe. And sleep. His days tend to start at 4:15 a.m. in order for him to talk to the officers from the night shift.

Tidwell says he and his wife Laura plan to remain in town; he seems pretty well glued to the place and people.

To be precise, it will be 24 years and three months at the helm as chief of police. Tidwell started with the department on July 22, 1986, as a patrolman. He became a sergeant and took his current job with the idea it would be a temporary arrangement. So much for that, he laughs. Sgt. Dean Morgan is set to take his place.

It’s an odd time, at the very least, to be a cop or retire from being one, admits Tidwell, with the pandemic changing the rules concerning things like hugs and potlucks and the risks in responding to calls.

He says the department saw an uptick in the intensity of domestic violence calls after people were told to stay home. Some incidents have been more severe, and more drugs and alcohol appear to be fueling the situations.

Tidwell is big on pointing to the impact of drugs and alcohol in a community’s health. According to Tidwell, he has responded to just two domestic calls that have not involved them.

The national climate these days also adds to the tension of being a cop, he says, thankful he works in a small town. The situation makes him more mindful of his son Logan, whose life as an officer in Westminster, Colorado is vastly different.

Tidwell gets emotional talking about the death of George Floyd at the hands of a Minneapolis police officer. “You just tarnished my badge… and that of every good cop,” he says, struggling with the words to describe the incident and the failure of other officers to stop Derek Chauvin from killing Floyd.

“Ninety-five percent of the cops in this country are good. They have a wife or husband or have kids. And we hate this.”

Tidwell says his current department of 11 is probably the best crew he’s ever had on board, and attributes that in part to a wide span in the officers’ ages. “Having a team is like a marriage,” he notes. “It’s all the little things that add up.”

He says there are also four basic rules that everybody at the department has to live by, and which seem to work: 1) Get respect by giving it. 2) Do your best to do the right thing. 3) You’re fired if you lie to a supervisor. 4) Have fun.

He says the department has been using body cameras for the last six years, and that he’s all for having that technology in place. “What you see is what you get.  It makes a good cop better,” he says. “And it makes a bad cop gone.”

When asked about the incident that will stay with him the most, Tidwell says it was the Oct. 26, 1996 death of Patrolman Trevor Staszak, who was killed by a drunk driver while assisting the state patrol at a crash site. Tidwell had been chief just six months when Staszak was killed.

“I came within one breath of getting out of this profession,” Tidwell says. He accompanied Staszak’s body home to Wisconsin.

Tidwell attributes his longevity in the department to his relationship with God and his wife, Laura. The two met in his hometown of Granbury, Texas. He says Laura’s job as an EMT (now retired) gave her hands-on insight into his job.

He credits his parents for instilling the positive attitude by which he is known – which he says has caused his career “to go by in the blink of my eye.”

“I don’t believe in bad people, just bad decisions,” he says. Ninety-nine percent of the people I know, I don’t judge ‘em.”

Featured image: Chief Jimmy Tidwell says his 34 years in Buena Vista law enforcement have been good ones and his career feels like the blink of an eye. Tara Flanagan photo