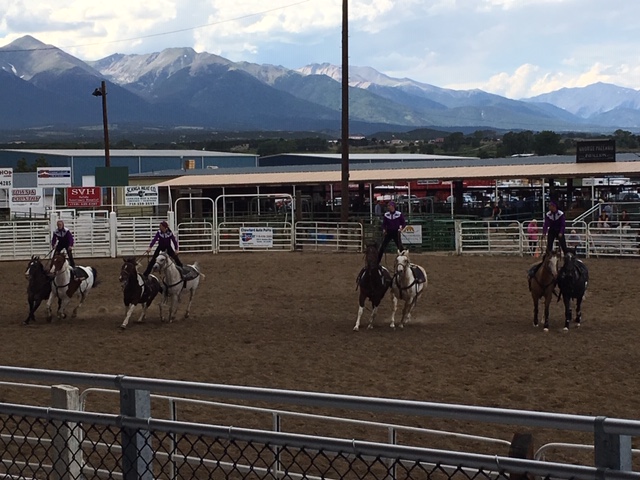 It was a grand day at the Chaffee County Fair on Friday, July 31, as the new grandstand was dedicated to long-time Colorado State University County Extension Agent, the late John Fuqua, and the Westernaires delighted the public with a stellar arena performance. 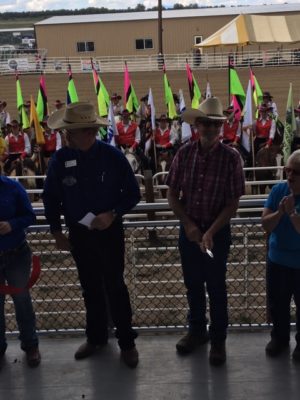 Extent Agent Kurt Jones left, and former County Commissioner Dave Potts were among the county and fair board dignitaries dedication of the new Chaffee County Fairgrounds grandstand in honor of John Fuque on Friday.

“I’d been on the job a few weeks when I met John,” said current CSU County Extension Agent Kurt Jones. “He walked in and said, ‘I had your job,’ well, you listen then. He would drop by every few weeks, and he was the living history of this place.”

Jones said Fuqua told him there had been an extension agent here in Chaffee County since 1923.

“He kept says that [we had] to build a new grandstand,” said Jones. “Then when [the grandstand] looked like it would become a reality, he pointed at the north building and said ‘that’s next!’”

Former Chaffee County Commissioner Dave Potts added his comments. “This has been a labor of love. It is really wonderful to finally present this [grand stand] to the citizens of Chaffee County.” 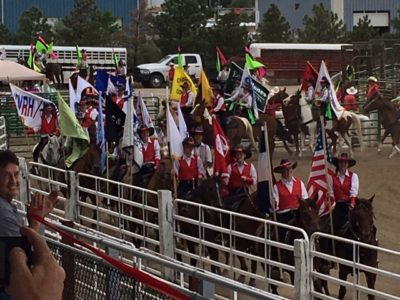 The dedication was followed by a rousing performance by the Westernaires riding group out of Golden. The young women, all age 17 or younger, performed precision drills on horseback, did stunt riding and generally thrilled the audience.

Sitting near a group that turned out to be some of their mothers, Ark Valley Voice learned that the girls come from all over Colorado and Wyoming to be a part of the Westernaires. They practice hours every week and perform all over the west. Many don’t have their own horses. Instead, they rent them by the hour, demonstrating extreme dedication to their sport. Their overwhelming assessment — there is nothing else in Colorado like the Chaffee County Fair.