On Edge: It feels empty when clients from afar aren’t showing up this year

Part II of Ski instructors and the emotional, financial and physical disconnects due to the pandemic 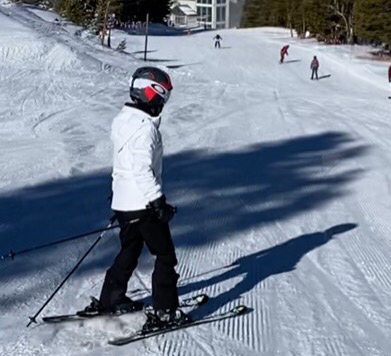 COVID-19’s distance – emotionally and in some cases from overseas – makes it tough on people who connect on the hills for a living. Rosemary Lemke photo

A year ago, Maxine’s calendar was booked solid, save for a couple openings.

A ski instructor for more than 20 years, she has developed an international clientele of families that return to Vail and Beaver Creek year after year. They are the well connected and well heeled, comfortable and confident in places far from home.

They’ve become close enough on Maxine’s emotional radar that it hurts when they can’t show up. The stories go on hiatus and the connections languish at a time when people crave what’s normal and usual.

This year they’re staying back. International travel is down 70 percent. There are travel restrictions and advisories and there is the matter of just not wanting to take the risk. Her season-long calendar has just one booking.

“Doctors tell Grandma and Grandpa not to come,” she says. “So the whole family stays back.”

Internationally, the United States is in a sea of red on CDC maps, denoting the highest risk for COVID-19. While there was talk from the White House about easing international travel restrictions in and out of the U.S., a more contagious strain of the coronavirus has entered the picture in the UK. That certainly isn’t filling the white space in Maxine’s book.

And while the newly released vaccines are the light at the end of so many tunnels, their timing is unlikely to immunize the financial vulnerabilities of the 2020-2021 ski season. Vail Resorts reported a 50 percent revenue decline for the first three quarters of 2020, a situation that has had more than a trickle-down effect on many workers.

In a typical year, the gratuities from her long-term ski clients carry Maxine through the off seasons, before and after her summer job. But now she’s working with the daily students that come through ski school; as a long-term employee she is closer to the front of the line to get students when she doesn’t have her own bookings.

But it’s not the same this season. She earned $20 in tips in the first week back on the snow.

Maxine, though, is emphatic that she’s not in it for the money. “There’ so much more to it,” she says. “Their ritual is coming here and skiing with me. It’s a blessing – the relationship.”

She says that over time, clients integrate their ski instructors into their families. “I get the invitations to the weddings and bar mitzvahs,” she says. “And now we miss them – dreadfully.”

There’s also the matter of everyone feeling safe. She says the ski company has gone a long way to incorporate safety into the ski and snowboard experience. But Maxine says there’s a higher level of stress working with students she doesn’t really know. And if she is teaching different morning and afternoon classes (her usual clients tend to book a week or even two at a time), that ups the amount of possible COVID-19 exposure she has in a day.

And whereas she feels comfortable talking to her yearly clients about most things, she says it can get uncomfortable telling people to keep their space and put their masks up over their noses. People pay a lot to ski and take lessons and not everyone wants to hear it, she says.

There’s now ‘a layer of weirdness’ and disconnect throughout her days at work. When riding the gondolas and chairlifts, for example, the instructors and students stay masked and sit apart from one another. In a typical year, that’s when people take off their goggles, talk and connect. They might not even talk about skiing. They might discuss movies or music or where they’re having dinner (private ski instructors are often de facto concierges). But now it’s strange enough that Maxine has the option of requesting her own gondola car.

“Unfortunately, keeping us safe in this pandemic means keeping us apart,” she says.

Over the years she’s learned a lot of psychological models in her instructor training and the aspects of learning while out of one’s comfort zone. “First and foremost they’ve got to feel safe and comfortable with us,” she says. “It’s way harder when you’re wearing a mask, and if you get a student that’s petrified, it’s so much harder to develop trust.”

She says her other family – her long-running group of fellow ski instructors – is similarly splintered this year, and says new employees might have it easier in that regard because “they don’t have established routines.”

Maxine says her first day back on the job this year was perhaps an omen of a difficult and emotionally jarring season. She arrived at the enormous locker room and it echoed; nobody else was there. While it has been a long-established company policy that employees don’t wear their uniforms outside of work, this year they’ve been instructed to arrive at work in their uniforms, put on their boots, grab their skis and head out as quickly as possible.

She says there is far less opportunity for the mental and emotional preparedness for the day, and says that with distancing and people wearing masks, goggles and helmets, all her co-workers pretty much look the same these days. She now recognizes her fellow instructors by their skiing style from afar.

Maxine says she was physically and emotionally exhausted after her first week. The resorts have reservation systems that limit the number of skiers on a mountain for this season, but she points out that if an area is having a drought and not many runs are open, there are still crowds to contend with.

Maxine says she’s finding some coping mechanisms. For instance, no matter what, there’s always the scenery and the natural beauty of the place. It gives her a lift and helps ensure that her clients will be back next year.

“I’ve got to try to look at this year as an opportunity for growth and development,” she says. “I’m just going to have to give myself extra pats on the back.”

Editor’s Note: Whatever you’re going through, crisis counselors and professionally trained peer specialists are available to help. Call Colorado Crisis Service hotline at 1-844-493-TALK(8255). There is no wrong reason to reach out.

Visit https://arkvalleyvoice.com/on-edge/ to read more OnEdge interviews about people’s struggles with the impacts of COVID-19 and their paths to overcome the challenges.