The Centerville Ranch proposal is quite possibly the largest planned subdivision ever to be proposed in Chaffee County. Located east of U.S. 285, the development would directly abut the state road, which is a designated Colorado Scenic By-way. (https://www.codot.gov/travel/scenic-byways/south-central/collegiate-peaks) 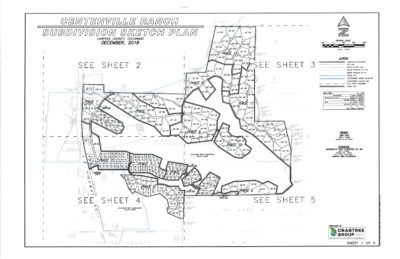 The proposed sketch plan contains 210 home lots ranging in size from one to 8.4 acres; spread across 500 acres, as well as a 17 acre commercial area bordering U.S. 285. The development would meander along the ridge lines overlooking agricultural acreage, and a significant portion of the homes would be visible from U.S. 285.

Roughly a third of the proposed lots are one acre in size and all proposed lots would have private wells and septic systems. In contrast, other older subdivisions in Chaffee County, including Mesa Antero and Game Trail, contain less than half as many homes, have central wells, central septic systems, and are not close to the scenic by-way.

Jeff Ince completed the ownership transfer of the land underlying this proposal to Centerville Ranch Investment LLC (George Love, Don Weeke and Don Love) only recently, on Jan 16, 2019. The proposed development is a 500 acre, seven-phase lot configuration that wraps along 470 acres of meadow land in agricultural production; land which Ince says is part of a negotiation with the Central Colorado Conservancy to become a conservation easement. That two larger parcels of the proposed conservation easement are connected via narrow land corridors that intersect the lot phases. Based on the Chaffee County LUC, the development is required to designate 21 acres as subdivision open space.

While planning commissioners expressed concern over preserving the view corridors along U.S. 285, they initially appeared less concerned with views or lot sizes than with their perception that approving the sketch plan might leave a portion of the land as an “out-lot”.

“The question is, what is this legally?” asked Planning Commission Chair Mike Allen. “If we approve this subdivision, that portion is excluded and no longer part of the parcel we’re considering … we’ve got this orphan parcel which, if it isn’t in conservation easement, can be built on.”

Planning Commissioners indicated they wanted to see a pure development plan in the next round, without reference to the conservation easement not connected to the subdivision proposal.

Public comment on the Centerville Ranch proposal was largely negative.

“You’re trying to put the city in the country,” said Bill Dvorak, who runs Dvorak Expeditions west of U.S. 285 across from the proposed subdivision. “My main concern is water resource – 210 private wells and septic systems would see a significant impact on our wells. Then there’s the visual impact to this area — and the impact to wild life winter range — it’s huge.”

“My concerns are multiple, said Rick Hum, of Mesa Antero. “This community has said that it wants the growth concentrated in the developed areas, not in the open areas. It’s a shame if codes haven’t kept up with this. I applaud them trying to keep the meadows open, but the one acre lots are a concern … in Mesa Antero we have a water association – we have one common well and common septic. We’ve already seen huge increases in traffic on 285, so introducing hundreds of homes into this area is wrong. We need to keep the growth in the urban areas.”

Realtor Karin Adams reminded the audience that Ince has been careful about the lot plan for the development, placing lots where they set back into the landscape. She said the development includes plans to protect the historic Centerville town site buildings, including the Centerville school and cemetery. “They are looking for more ideas to make this a complimentary village to the county.”

“This is way too tight,” said Nathrop resident Brenda Dempsey, a retired Realtor, who spent 30 years in real estate in the Denver Metro area. “An acre lot belongs in the city or next to town, not in the middle of the country. We need to think 50 years from now. We have a responsibility to create the atmosphere here appropriately.” She went on to enumerate concerns including; “There should be a central water system. Are these lots or spec homes? What is the expected build out time?”

Others who spoke brought up the need for a hydrology study to determine the impact on water tables, the need for traffic studies, the need to protect the view corridors, the importance of being a Colorado state scenic by-way, concerns for wildlife, and objections to density.

Planning Commissioners allowed the sketch plan to continue, and noted that the next step will require comment from dozens of state and federal agencies including the Water Board, Colorado Parks & Wildlife, U.S. Forest Service, the Colorado Dept. of Transportation, the Environmental Protection Agency, among others. That approval was not without reservations.

“You’re way too simplistic about water,” said Planning Commissioner David Kelly. “They need to do testing on refill and recharge on water. That area is irrigated by the Bowen Ditch. We need a study to make sure enough recharge there to support that density.”

“Clustering (smaller lots surrounded by open space) is an important tool in our community,” said Planning Commissioner Marjo Curgus. “But it has to be thoughtful in terms of landscape, hydrology, geology.”

“What I fear is we are moving toward another municipality with no government in this county,” said Planning Commissioner Bill Baker. “It’s like we’re being painted into a corner and we have to build a new town almost. I don’t think that is what we want. I know this is a sketch plan, but once we approve that, then it becomes ‘well, how do we mitigate this or that’… the biggest flaw is we’d be building another town in the county and I’m conflicted.”

Planning commissioners appeared less concerned about incongruities in the application of the county’s density directives. The Chaffee County LUC indicates that density is preferred in proximity to existing municipalities. While the Planning Commission approved the sketch plan for this large, high-density development which lies no where near any municipality, in November 2018 they denied a significantly smaller tiny home project (not presented as a major subdivision proposal), ostensibly because it represented too much density for a rural zone.