Two events over the past weekend in Poncha Springs helped to unofficially mark the beginning of summer. The inaugural Strider Race began at 11 a.m. And the day-long town spring cleanup day was just as anticipated.

The race was as all-inclusive as was possible: open to all from age 4 years and younger children who arrived on the proper safety equipment and qualified race mobile—striders, tricycles and pedal bicycles were seen at the finish line. 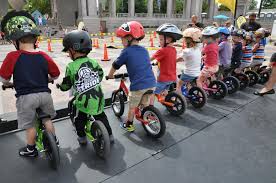 “My son had been bothering me all year about the [Strider] Race last year in Salida. When I heard Salida was not doing one this year we decided to put one on in Poncha,” said Town Administrator Brian Berger.

Though there were no previous years to compare, Mayor Pro-Tem Adrian Quintana believed it was a good turn out for a first race. There were around 20 official entries with gold, silver and bronze medals awarded to the top three finishers with all others finishers receiving qualifying medals.

After a near full week of rain and snow, and with snow still melting in many places around Chipeta Park, parents and children were all happy to finally see a sunny day.

The second anticipated event, the town’s annual spring cleanup day was also Saturday, May 11. As in previous years, the Town of Poncha Springs provided a large “roll off” dumpster outside behind the town hall to allow people to dump non-hazardous items for free. It appeared the free dump day was well anticipated because well before the noon hour the large dumpster appeared over-full.

Several pickups and trailers were seen also seen throughout the town hauling limbs, leaves, and other yard debris to the town-run burn pit.

That day the town also accepted small appliances and non-hazardous electronic appliances. Lunch was provided by the local Crossroads Church in the park picnic area.