The Board of Chaffee County Commissioners has scheduled a public hearing for 6 p.m. Wednesday, March 27 to hear two appeals by Alison Brown for actions taken by the planning commission. The appeals filed Jan. 29 by Brown’s attorney Michael Scott, include an appeal of the approval by the planning commission of an application for a Limited Impact Review for Antelope Road Outfitters. Another appeal was filed for the Jan. 15 denial of her application for a Limited Impact Review for here Antelope Road Kennel. 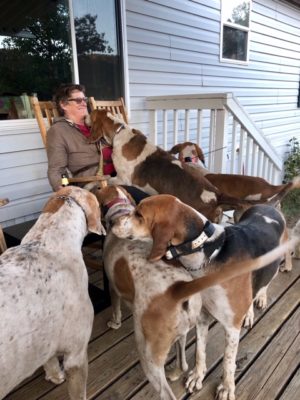 It has been six months since a direct request for an update from the county, by resident Dave Moore, yielded a negative response that anything was in process. That response appeared to surprised commissioner Keith Baker who said he was expecting one in response to the “way forward that commissioner [Greg] Felt and I landed on as a way forward.” (County Commissioners still waiting on outfitting definition.)

While the staff report references the definition used on the District Court Order Imposing Permanent Injunction, it has still not provided a definition of its own. That fact may be of concern not just to Brown, but for many residents of the county, who remain unsure whether their activities are at risk of county action against them.

While that issue is reason enough to review progress, the March 20 staff report regarding Brown’s kennel application contains a more concerning issue for the public. The planning commission denied Brown’s application Jan. 29, 2019 for a kennel on her property at 11600 Antelope Rd., to house her 25 American foxhounds.

One of the primary reasons given for the denial was that staff and planning commission determined that Brown’s use of her property affected the conservation easement on the neighboring Everett Ranch. They quoted complaints by nearby neighbors (who have fought Brown’s property rights for the past 18 months), as saying that the wildlife seen on the conservation easement area would be affected by her dogs. 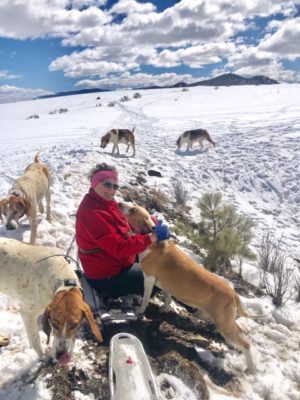 Brown with some of her American Foxhounds. She has housed them up Ute Trail in Fremont County at Whitehorn all winter.

But Colorado Parks and Wildlife (CPW), which reviewed the application, found that Brown’s property use had “no impact” on the neighboring conservation easement.

“The Cattlemen’s Association Conservation Easement is one of the best easements you can have. If they are saying you are limited in what you can do because you are next to a conservation easement — man, someone is way out there on that,” said Canterbury of the Colorado Cattlemen’s Association. He spent 14 years on the Fremont County Planning & Zoning Commission. “They are dead wrong. Maybe if it was a nuclear waste site you were creating, but other animals? No. Those dogs aren’t going to bother the wildlife.”

“I’m a very pro-conservation easement rancher and what a person wants to do with his land is his business,” said Canterbury. “That’s his private property right to put it into an easement, but it has no bearing on what I can do with my place.”

“There are many types of conservation easements. We have a couple Cattlemen’s Association non-productive ag land easements on our land, so I know them well,” said Hutchinson. “But neither of them gives the neighbors the right to tell us what to do. My land is my land, and your land is your land. If you choose to do a hog farm next to a cattle ranch, fine I support. If you chose to do a nuclear waste site, then that might be a problem because it’s safety. But this? No.”

“Being next door to a conservation easement will enhance your property value,” said Canterbury. “They’re going about it unconstitutionally. If it gets dragged into a public forum of some kind I’ll stand up. It seems to me that those other neighbors think they want to live out west but they want all the amenities that town and city folks get. They want to tell their neighbors what to do like they’re living 25 feet away. That’s not right.”

“Good neighbors like compatible uses. That’s something the whole community would support,” said Hutchinson. “But I tell you, nothing in our easements say they limit our neighbors from doing anything. It should enhance the value of their lands.”

Glenn, who leads the Colorado Cattlemen’s Agricultural Land Trust as well as the Colorado Cattlemen’s Association, is in charge of the process that grants the kind of easement on Everett’s land. “I’m disappointed to hear that staff would use this against a landowner,” said Glenn. “I have never heard of this and we would object to an easement being treated in this way. We believe strongly in private property rights unless an actual easement property itself is affected, and I don’t see that here. In fact, if CPW has said there is no impact, what is the issue?”

Asked about the type of conservation easement in question and what types of things it protects, Glenn provided some context, explaining that there are four conservation purposes used to determine if a property receives the easement status that triggers state tax incentives. “Agriculture is actually not one of our main purposes, it’s a sub-purpose. The four main reasons are open space (tied to scenic which is a federal statute), natural habitat, recreation and the forth is education and historic significance.”

Glenn was emphatic about the subject easement. “We don’t support conservation easements being used as a tool against a neighboring property. This easement is not a wildlife easement. Wildlife is just one element of a conservation easement. Yes, there is some wildlife habitat, it is part of most every easement we do, but only a part. Ranchers, the property owners, know best about their land.”

Glenn went further, explaining the law behind conservation easements. “If parks and wildlife list the property as a migration corridor for a species, we would put that in the recitals of the easement. But by no means should that be interpreted or intended to limit what somebody else would do on their adjoining or nearby property. In fact, under conservation law, the easement can only be within the four corners of the conservation easement. We call it the Four Corners Theory and it’s big here in Colorado.”