‘Quarantine’, an Ancient Word with a New COVID-19 Meaning

As public concerns over the coronavirus known as COVID-19 continue to grow, and the virus has spread to more than 60 countries around the globe, two words have entered common vernacular; ‘pandemic’,  ‘quarantine’.

The World Health organization (WHO) and the Centers for Disease Control (CDC) have so far been reluctant to declare the global health emergency as an official pandemic, although global cases have topped 100,000 spread across more than 80 countries. But the second word – ‘quarantine’ – is echoing around the world as governments, schools and health organizations, attempt to stop the spread of COVID-19. Here in the U.S. the word being bandied about wholesale — often in relationship to the word “self” – as in “self-quarantine”. 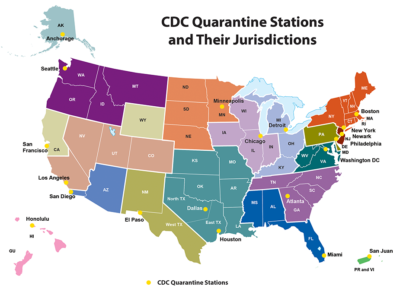 The Centers for Disease Control has long had a quarantine map dividing the country into 20 station coverage jurisdictions.

“Quarantine” is the direction to separate from the rest of the population for at least 14 days, those who think they have been exposed to the virus, or are showing signs that they may have it.

In January, China shut down access to millions of their residents in affected areas around Wuhan after the virus spread. In northern Italy, a ‘red zone’ has been created around several rural areas north of Milan, and just this week new towns have been added.

It might be useful to understand the origins of the word ‘quarantine’. The word comes from 14th century medieval Italy, derived from the Italian words “quaranta giorni” which in the Venetian dialect of the time meant “40 days”.

The word originated during the Black Plague, when Italy was the trading capital of the western world. Back then, ships arriving in Venice from infected ports were required to sit at anchor for 40 days before landing.

Quarantine was a response to the Black Plague, also known as the Black Death, or the Pestilence. In October 1347, 12 ships from the Black Sea docked at the Sicilian port of Messina. People gathered on the docks received a shock. Most sailors aboard the ships were dead. Those still alive were gravely ill and covered in black boils that oozed blood and pus. Authorities ordered the fleet of “death ships” out of the harbor, but it was too late. Over the next five years, the Black Death killed more than 20 million people in Europe – almost one-third of the continent’s population.

The devastation in Europe was just part of one of the most devastating pandemics in human history. Between 1347 and 1351 an estimated 75 to 200 million people died of the Black Death across Eurasia.

On the local scale, the plague wiped out entire towns and most of the populations of small countries across Europe.  Fear of the disease caused wealthy families to take extreme measures to protect their families, in some cases walling themselves up in towers. (The historic towers of Italian towns such as San Gimignano, an Italian hill town in Tuscany, southwest of Florence, were built partly as protection against the plague.) 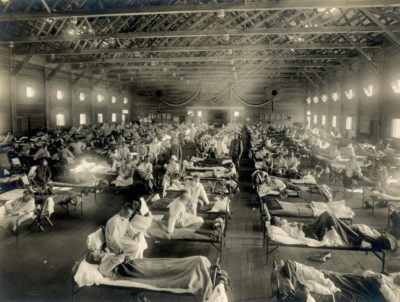 An emergency hospital in Kansas in 1918′ a quarantine site for people with Spanish Influenza.

Other diseases lent themselves to the practice of quarantine before and after the devastation of the black plague, including the Great Plague of London. The novel A Journal of the Plague Year, published in 1722 by Daniel Defoe, gives an account of one man’s experiences of the year 1665, in which the Great Plague (the bubonic plague) struck the city of London and massive quarantines were enforced.

In the U.S. and around the world, quarantines have been enforced several times through the centuries, including for epidemics of yellow fever, cholera, diphtheria, infectious tuberculosis, smallpox and typhoid.

In 1918, the global pandemic known as Spanish Flu at the end of World War I killed more people than the war itself did. Some 30 million died; about 1.7 percent of the world’s population.

The Public Health Service Act of 1944 clearly established the federal government’s quarantine authority for the first time. Now, as then, local governments have the authority to establish quarantine rules and processes  for their own service areas of responsibility.

Today there are actually 20 CDC quarantine stations across the United States, as part of the nations public health structure. U.S. Quarantine Stations are part of a comprehensive system that serves to limit the introduction and spread of contagious diseases in the United States. They are located at 20 ports of entry and land-border crossings where most international travelers arrive.

The CDC has the legal authority to detain any person who may have an infectious disease that is specified by Executive Order to be quarantinable. If necessary, CDC can deny ill persons with these diseases entry to the United States, or movement within the country. The CDC also can have them admitted to a hospital or confined to a home in isolation for a certain amount of time to prevent the spread of disease.

For more information about these quarantine stations in use today:

TOMORROW: Look for the Ark Valley Voice piece looking back to 1918; the local response in Colorado to the Spanish Flu pandemic.