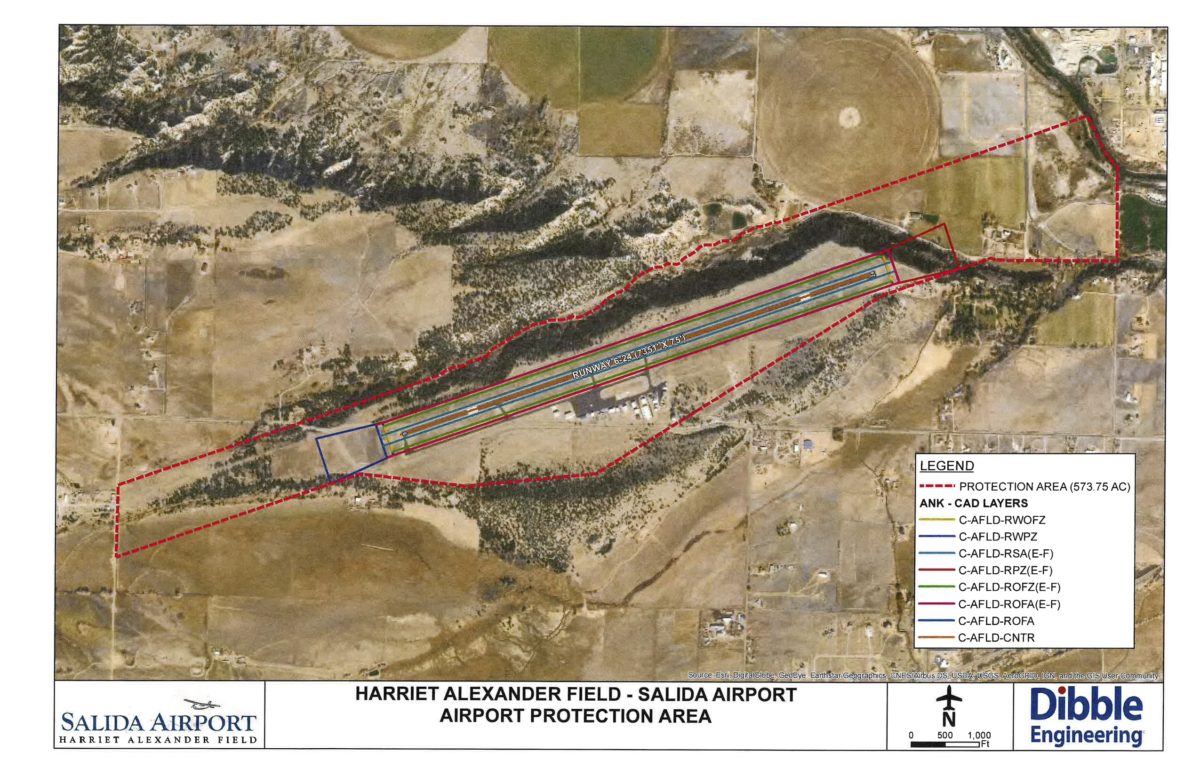 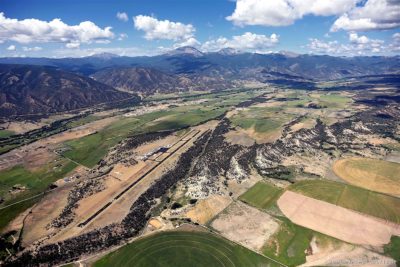 An aerial photo shows the expanse of the Salida Airport. Photo courtesy of Zech Papp.

Airport Manager Zech Papp detailed a list of projects he is shepherding and encouraged board members to support further improvements and expansion that can make the facility self-supporting as well as a revenue source for Salida and Chaffee County.

Papp reported that American Road Maintenance, the contractor for the runway work, is ready to begin work this week. The project entails refilling and repaving, as well as crack repair on what’s known as Alpha I and Alpha II runways. Final seal coating and striping of the runway, taxiways, and apron would come at a later date. The airport will not be closed for the first phase of the project, said Papp.

One unexpected maintenance issue Papp reported, is the septic system. It is apparently leaking, forcing the use of portable bathrooms while the source of the problem is investigated. It is hoped the septic system at the field has not failed.

Papp also revealed a potential sale of Bill Reeves’ hangar at the airport to a potential client who, he said, is considering building a larger executive terminal on the site, complete with meeting rooms and office space.

Papp said that possibility may mean the septic holding tank and leach field might have to be moved anyway. He is trying to determine the exact nature of the problem with the system and staying on top of options with a new hangar lease and potential new executive terminal construction.

The airport beacon and runway lights also had not been working and it was discovered the photocell sensor at the power station had failed. Papp got a part ordered and repairs made after having to manually turn the runway lights off and on. Bids are being sought on erecting the new airport beacon, he said.

Demand for Hangar Space Appears to be Growing

The board voted to recommend approval of a new hangar lease for Nelson Amen, a local property owner who is purchasing a small hangar just to the west of the terminal building.

Papp reported that another owner of a 40-foot by 40-foot hangar on the east end of the field, has sold the hanger to Dave Dulaigh and a partner. The committee recommended approving a new lease agreement with him.

Papp also encouraged committee members to look ahead at airport needs for next year given that budget planning is just ahead.

He noted he has three letters of intent to build hangars on the property, which would need a taxiway extension on the east end of the field to accommodate such new construction. He stated if Salida and Chaffee County could undertake to construct that extension, perhaps adding about 400 feet, it would enhance future revenue streams by allowing needed expansion for more hangars in that area as growth continues. Papp said he will seek cost estimates.

A draft of the new airport overlay plan has been developed (featured image above), but both it and the necessary land-use code adjustments are considered to still be under development. Regarding land use, Papp said one person who wants to build a home on 38 acres they own at the approach of a runway is waiting for final decisions on land uses allowed.

There will be a scheduled joint meeting with the Planning Commission and advisory board on some of these issues with the overlay and land use code adjustments. The meeting will focus on reviewing both concerns of nearby property owners and the field security requirements of the Federal Aviation Administration that can potentially impact airport federal funding.

One board member also was complimentary about the establishment of a flying instruction business at the field. 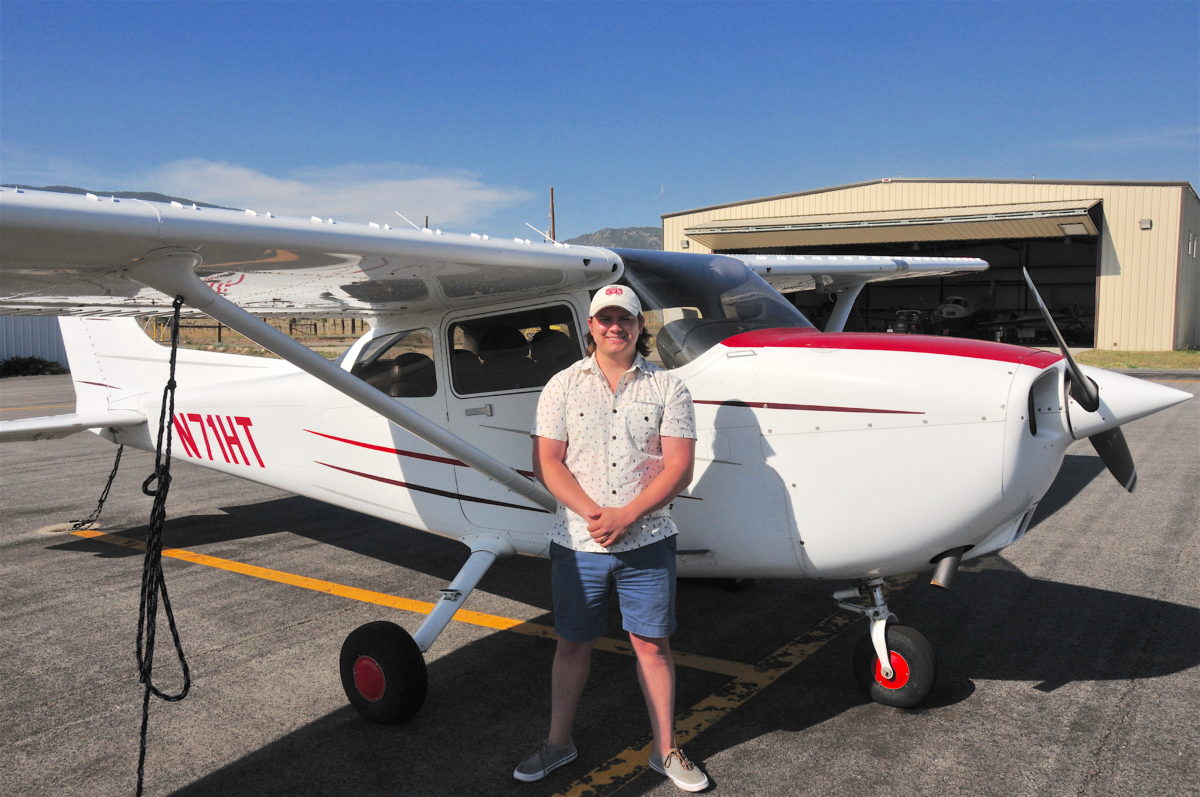 Noah Hightower with the Cessna 172 plane he is using for pilot flying lessons. Dan Smith photo.

Noah Hightower, a Salida native whose father, John, operates the charter service, Colorado by Air, at the airport, is a certified flight instructor who is now offering lessons to students. Hightower has also worked with the Young Eagles program which introduces young students to the experience of flying.

Hightower, whose father and grandfather were pilots, is a Salida native. He attended local schools before moving to Arkansas and Florida to further his education and begin flight school. He became a licensed pilot; soloed at only the age of 17. He holds a commercial license along with his flight instructor certification. Hightower utilizes a Cessna 172 with a bigger engine for lessons, and he said his first student was his wife.

Information on lessons can be obtained by contact Hightower at 719-362-7907 or noahhightower@outlook.com.