Two suspects in the burglary of a Chaffee County residence north of Poncha Springs on U.S. 285 on Tuesday evening, Nov. 17 were successfully apprehended last night. Arrested was Isaiah Garcia, age 21 of Moffat, CO, and Taylor Mossman, age 21 of Homer, CO. They had led Chaffee County sheriff’s deputies on a chase that ended when the driver of their stolen getaway car crashed the vehicle into a wooded area north of the CR 250 and CR 140 intersection. 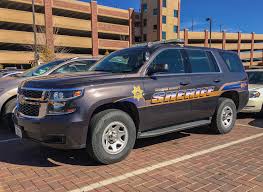 The incident was reported in a 911 call to the Chaffee County Communications Center at approximately 7:57 p.m. The homeowner reported that she arrived at her property to find a male and female party actively burglarizing her home. When she approached in her vehicle the male and female party fled in a 2012 Ford Expedition with no license plates and the homeowner followed them. Garcia, the driver of the Expedition stopped at a gate in the driveway, brandished a handgun, re-entered the car, and drove off.

Deputies from the Chaffee County Sheriff’s Office responded to the area and identified the suspect vehicle just north of Poncha Springs southbound. They attempted to initiate a traffic stop, but the driver of the Expedition refused to stop. The pursuit continued for several miles until Garcia crashed the vehicle.

That did not end the confrontation. A lengthy standoff then ensued when neither Garcia nor Mossman would exit the car. During the standoff, the driver again brandished a weapon as law enforcement negotiated with the suspect to drop the weapon.

Both parties were taken into custody without incident and transported to the Chaffee County Detention Facility.

The Saguache County Sheriff’s Office reports that this was not the first brush with the law by the two suspects. Earlier the same day, they had pursued the same vehicle from Saguache County into Chaffee County over Poncha Pass however, the pursuit was terminated by Saguache County due to the high risk of injury to the public. The Expedition had earlier been reported stolen by the Moffat, CO school district.