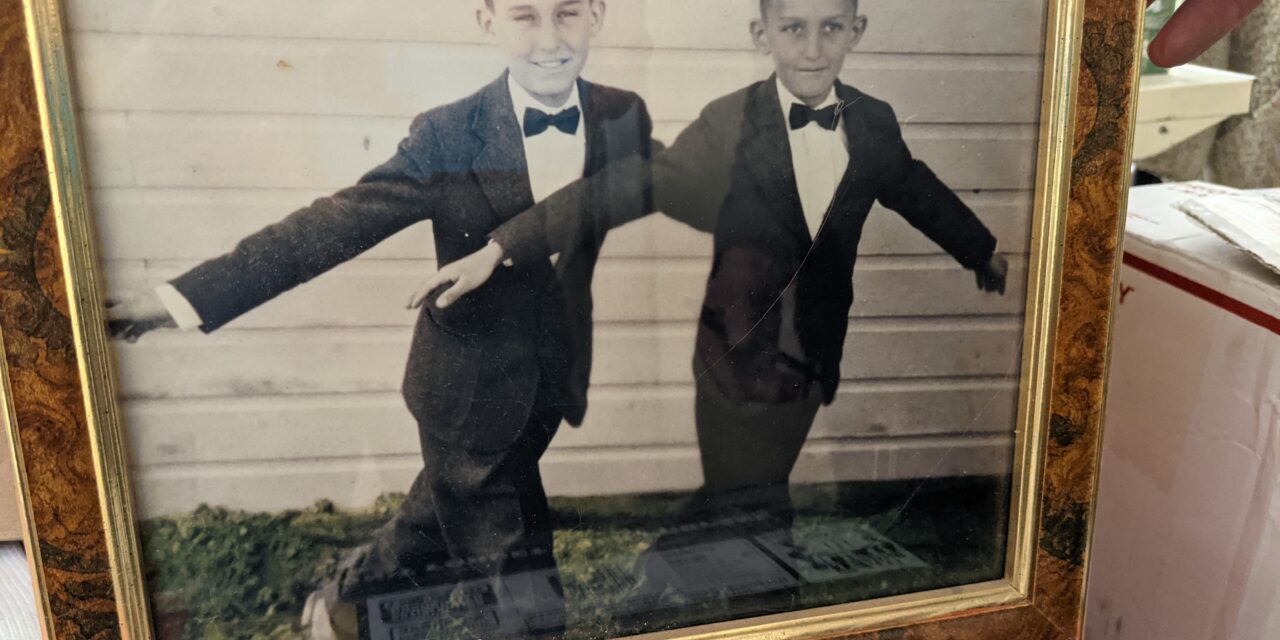 Over the decades, two brothers made their mark on Cañon City history, hoofing their way into the hearts and lives of their customers, moving from a local Vaudeville stint to a lifetime of community service running DiNardo’s Cider Mill and Farm Market.

Eighty years after the first stand went up, DiNardo’s Cider is celebrating its 80th anniversary this year, keeping its title as the longest-operated business on U.S. 50 in Cañon City.

In recognition of their service to the community and role in the local economy, the Fremont County Commissioners have declared this coming week, Oct. 3 to Oct. 9, 2021 as DiNardo’s Cider Week in Fremont County.

The DiNardo family has deep roots in Cañon City. The DiNardo’s homesteaded in the area in 1933 and the two twin brothers Mario and Albert started making cider in 1941 when they were just 12-years-old. That was about the same time the two tap-dancing brothers did a brief stint in the local Vaudeville entertainment industry and apparently decided there was a better future in fruit.

Customers of the farm market today, located at 1400 Royal Gorge Blvd., are likely to meet 92-year-old Albert (brother Mario died in 2017) when they enter the store. It is stocked with the signature juices (apple and cherry), private recipe jams and jellies, as well as produce from their own orchard and other local farms.

“DiNardo’s cider has supported the efforts of local farmers by sourcing and selling local produce, one of the oldest examples of local farm-to-table efforts, supporting the local, rural economy,” reads the proclamation by Fremont Commissioners Debbie Bell, Kevin Grantham, and Dwayne McFall.

Per the commissioners; local businesses such as DiNardo’s matter deeply to the local economy.

“The DiNardo family knows a smile means the same in every language and brightened their customers’ with a smile and a kind word,” adds the proclamation, urging the residents of the Arkansas River Valley to stop in at the Farm Market and express appreciation for long and loyal service to the community.

In 1941, the brothers were working for a local farmer near their family produce farm. The brothers thought they were going to get paid two cents a pound for the cherries they picked. But the farmer had other ideas. He told them to keep the cherries as payment. Faced with payment in a perishable product, and already possessed of heads for business, the two brothers decided to squeeze the cherries into juice — beginning a career that has already spanned 80 years.

With the juice bottled, they built a makeshift roadside stand to sell homegrown produce, their mother’s recipe jams and jellies, and their juice. By, 1945, they put the stand in the parking lot of where the current shop stands today. Because their father didn’t believe in credit, they had to wait and save their money until 1961, when they could pay cash to put up the current DiNardo Farm Market building.

The cider mill is now located over on Elm Avenue, and while the apple orchards remain, the encroaching homes and developments mean that the cherries for their cherry juice now come from Michigan cherry orchards.

While the uninitiated may think that apple cider is apple cider — Albert DiNardo will tell you that it’s a recipe — one that he’s still working on. Even with advancing age, he’s still involved in the pressing process and friends help him with bottling and packaging.

While DiNardo has worked hard his whole life, this year there is a bigger obstacle than pressing the apples or tinkering with the cider recipe — it’s getting workers to help pick the apple orchard crop. At 92, DiNardo can’t himself get into the orchard picking.

“We can’t get the workers in to help pick the apples,” said DiNardo, saying the shortage of workers is one of his biggest concerns for the future of the market. “You can’t make cider without getting the apples off the tree.”

Featured image: Twins Mario (left) and Albert (right) DiNardo started their apple stand in 1941, and this year the DiNardo Cider Mill and Farm Market celebrates 80 years of service. Photo of the original photo by Sandy Hobbs.