A Conversation with City of Salida treasurer-elect, Merrell Bergin 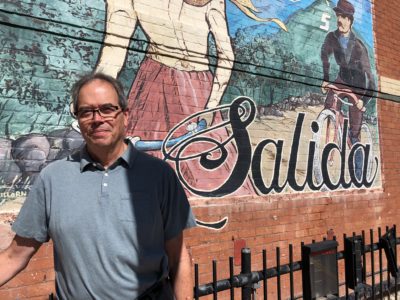 Merrell Bergin, treasurer-elect for the City of Salida.
(Photo by Taylor Sumners)

As part of our “Conversations with the Candidate-elect” interviews, Ark Valley Voice sat down with Merrell Bergin, the treasurer-elect for the City of Salida. The five Salida candidate-elects, who ran unopposed, will take their positions following the Nov. 5 general election.

Bergin graduated from the University of Denver with a degree in Business Administration. Before retiring last December, he spent  the first 25 years of his career in business operations. This entailed purchasing goods and services for a wide array of businesses such as hotels, medical device and high tech manufacturing companies.

Bergin and his wife PJ have resided full time in the heart of Salida’s historic and creative district since 2004. Now looking forward to his new role as the treasurer for the City of Salida, Bergin says he hopes to reengage citizens in the financial processes of the city.

1. What is your favorite part about Salida?

“Salida has a sense of place. It’s a small town. It’s smaller than the one I grew up in and certainly smaller than Denver, where we spent 30 years of our lives. It’s just so nice when people wave at you everywhere you go.

2. What has been your role in the community (jobs/occupations, volunteer positions, committees, etc.)

“When we first moved here 15 years ago, both my wife and I were involved with Historic Salida, Inc., which at the time was a citizen’s historic preservation group. The group was formed to help educate and advise people to respect our heritage and do restoration and rehabilitation, which up until that time had not been very big here. The building that we own and live in was one of the first to be rehabilitated.

“For the last 18 years, I traveled the country as an applications consultant for a major software firm. One of the primary markets that I worked in was health care. My job was to be an adult educator and coach, helping large hospital chains implement our software, often taking them from paper and pencil or spreadsheets to the latest Cloud-based software. My background since college has been focused on purchasing, contracting and accounts payable.”

“When I wasn’t traveling (and often in my hotel at night, when I was), I served Salida’s Colorado Farm to Table. I was on their board for three or four years and had a lot of fun helping write some very successful grants.  It’s gratifying to see they now have a greenhouse, special deer fencing and an irrigation system.”

“Consultants are trained to walk into a new situation and soak up things like a sponge. You work with all kinds of people from the C-level all the way to the person on the dock, receiving goods. Actually, my first job in high school was receiving goods in a grocery store.  You have to be able to ask questions that makes sense, then try to figure out what people are really doing and how they might work better. This means helping them overcome the fear of change.”

“One of my personal missions, with whatever system I am working on, is to instill people with pride in what they’re doing and show them that data quality is the foundation for everything else. Part of what we had to do was to convert old data which had degraded over 10, 15, even 20 years. Building quality data is like growing food for Colorado Farm to Table — it’s 24/7 and if you don’t tend to it every day, it quickly begins growing weeds.”

3. What do you hope your new role (or continuing in your role) will do for the community?

“What we have heard over and over again is that people are busy, but they want to be heard. About the worst thing you can do is ignore them or even if their concern may not seem legitimate, just dismiss it — one of the things the council has worked hard at in the past year, has really addressed that.”

“No news is not good news. One of the things that the city is doing, and I look forward to participating in, is the organizational communications plan, now underway with a consulting firm.  Council is also looking into using additional software tools to leverage the raw  sales tax and budget data which are now being published monthly.  The idea is to turn the numbers into a narrative and a visual snapshot; compelling, timely and credible about what the numbers mean; how trends will impact our citizens.

“I want to be a citizen’s advocate. Just like a nonprofit, a government is a business and it’s run for the benefit of the citizens. My job is to answer their questions, and work closely with the members of the Finance Committee and City Administrator, so we’re all the same page.”

4. The Envision survey highlighted community desires. Please pick one (housing, workforce, short-term rentals, etc.) and tell us about your ideas and strategies to better resolve the issue in the community.

“The city needs to play an increasing role in developing livable wage jobs in Salida. Affordable housing by itself does not help if wages don’t keep up. We have made some progress already on affordable housing and are headed to forming a Regional Housing Authority.  It is clear that this is the right direction, but we have a long way to go.  We need to work closely with the County, Poncha Springs and Buena Vista, as this is a valley-wide issue.

“I’m already observing the city’s budget process and finance committee meetings. I would be an advocate for a line item to do whatever it takes to create a significant amount of infrastructure for affordable housing. The way I look at it is that you have to take care of basic needs before anything else.  That means a job, a house and enough food on the table.”

5. Also, on the Envision survey was the topic of newcomers. What are your thoughts on welcoming newcomers and how can you connect them to the City of Salida’s history?

“I’ve lived in Colorado since coming to school here in 1970, but I still think of myself as (only) a semi-native.  Salida has been our full time home for 15 years. Yet there are still many people in town that I don’t know, because I traveled five days a week for 48 weeks a year. One of the things I plan to work on is to do outreach and try to find more people. I want to make connections with those who have been here even longer than I have, because I recognize their value.”

“Even though I live downtown, I need to get out to all of the different neighborhoods. Because one of the benefits of the role of treasurer is to represent the city at large and I want to hear what is on people’s minds.”

6. What does collaboration mean to you?

“Collaboration is an attempt to bring people with diverse views together and try to arrive at a central point of some kind. What we all need to realize is that it is not a zero-sum game, with winners and losers. To an earlier point about change and people’s fear of change, this seems to be one of the biggest takeaways from the Envision study. I can look at it logically and say I can see that there is a  way we can approach how we come to terms with change, but not everyone [only] thinks logically; we’re humans first, after all.

“Sometimes it’s a little hard for someone like me who works in quantifiable kinds of things. [I recognize] that people react emotionally too. I think the challenge for all of us in Salida is to get to a place where we can communicate on an emotional level and also get to some kind of a neutral place. So it’s neither an extreme of raw emotion or total logic because neither one is practical. Somewhere in between, I truly believe we have much more in common here than we don’t, and we just have to find that place.”

7. What keeps you up at night?

“Hmm”, Bergin replied, “If I work on numbers too late at night, it keeps me up. As I mentioned earlier, my experience has been in business operations, procurement, and paying the bills, so I think that’s a natural fit for treasurer.  For the rental property that we manage, I run QuickBooks, but as much as I like it, if I do it after about 8 p.m., I’m not where I want to be. I try to counteract that with classical music and quiet reading.”

This series began with the following conversations:

Introduction to week-long series of conversations

A conversation with Mayor P.T. Wood