A Historically Bad COVID-19 Day — One For the History Books

Millennials may want to mark this day so they can tell their grandchildren about it. It was a day when a global pandemic is accelerating, the stock market lost more than 13 percent of its value, Main Street is reeling, and our federal executive branch revealed that there is no real plan to lead us out of this crisis.

While President Donald Trump gave himself a “10” today for his response to the coronavirus known as COIVD- 19, there are now 4,400 confirmed cases in the U.S. and more than 80 people have died. In Colorado, as of March 16, the Colorado Department of Public Health and Environment (CDPHE) confirmed 29 new positive cases of COVID-19 in the state since Sunday, based on overnight test results reported through 3 p.m. today. This follows 30 new cases on Sunday. That brings the total number of positive cases in the state to date to 160 since the first case March 2.

Those are the human numbers. The crippling economic damage is paralleling the virus.  Some are saying this crisis has the power to reshape this country’s business environment. 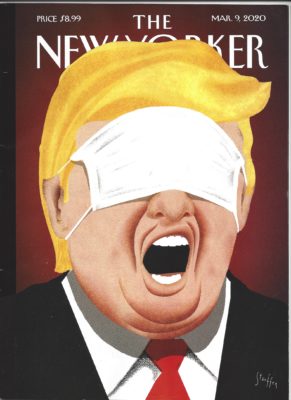 Edition of the New Yorker March 9, 2020. Art by Brian Stauffer

Only two weeks ago the president called the COVID-19 pandemic a “hoax” and announced that the 15 cases would be gone and the virus “would disappear like a miracle.” Then later he said that “anybody who needs a a test gets a test.” It wasn’t true when he said it and it isn’t now.

In the meantime, the U.S. Senate has decimated the economic aid bill to rescue Main Street and hourly workers, hammered out over the weekend by the House. (While it got a thumbs up from the president, it appears to be rendered dead-on-arrival in the Senate.)

The U.S. is only beginning to deal with the health crisis that is tipping the world into a global recession.  Experts are saying that where the U.S. is right now in the progression of this virus, is the same spot that Italy was in two weeks ago; a country now on complete lock down.

There are dire warnings by experts that the U.S. is not ready for what is coming. Asked today during the Colorado media briefing how many ventilators are in Colorado, the CDHPE spokesperson Scott Buckmann said they did not know how many there are, or where they are, and how many will be needed; only that there aren’t enough.

As the Colorado media briefing was going on, Trump held a conference call with the governors of all 50 states. He told the states that when it comes to ventilators — the critically important equipment needed to treat people  struck down by this respiratory disease, that has no known treatment, and no vaccine — the states are on their own; they should proceed on their own to locate and acquire ventilators.

At precisely the moment when this country needs real leadership to confront an accelerating pandemic, our federal executive branch revealed that there is no real plan to lead us out of this crisis.

For more information about progress addressing COVID-19 in the state of Colorado and efforts to combat the spread, visit https://www.colorado.gov/pacific/cdphe/2019-novel-coronavirus.