Does What News You Read and Watch Influence What You Think?

As it turns out, the news sources we read and listen to can have a measurable effect on our willingness to consider another point of view, or even whether we think a piece of news is true or not. One study was done by economists 15 years ago, and another was done in late 2020.  Both show an impact on peoples’ perceptions and beliefs.

In a country as divided politically and culturally, as the U.S. has been, it is worth a look at why this is happening and what might be done to broaden our viewpoints.

In 2000, a study that considered voting preferences for the hair-thin 2000 election (the Bush-Gore contest of “hanging chads” that ended up being decided by the Supreme Court) revealed that news media can influence preferences.  In 1996, media mogul Rupert Murdoch started Fox News, and the modern world of opinion news pundits and media owners who threaten fact-based news and pushed their own agendas was born. Until then the news was news – reported upon but basically considered factual.

That early study showed that exposure to Fox News could have a measurable impact on elections. It compared markets that had received Fox to those where the cable station wasn’t yet available. According to Bloomberg News, that study concluded that the presence of Fox News was good for a Republican gain of 0.4 to 0.7 percentage points between the 1996 and 2000 elections.

Fast forward twenty years to 2020. As it turns out the news sources you read and listen to aren’t just a channel choice or a web page preference. The more exclusively you focus on a narrow group of news sources the more it can have a measurable effect on what you think.

As reported by Bloomberg News this past week, recent research proved that listening to a broader media selection; just adding CNN (as opposed to only Fox News pundits such as Sean Hannity or Tucker Carlson) didn’t just change the research sample’s mind about a topic or a voting decision; it actually changed how they thought.

According to the new research study by political scientists David Broockman of Stanford and Joshua Kalla of Yale:

“The research offers a much more granular look at the impact of Fox on its viewers, thanks to reliance on a resource-intensive experiment, rather than the broad aggregates of that earlier paper. Broockman and Kalla recruited a sample of regular Fox News viewers and paid a subset of them to watch CNN instead. (Compliance was enforced with some news quizzes, for which additional compensation was offered.) Then the treatment group of switchers and the control group of non-switchers took three waves of surveys about the news.”

So what difference could it make to what they say? Quite a lot, as it turns out.

The biggest changes were recapped by Bloomberg News: these “switchers” moderated their views:

Any way you look at it, these are meaningful differences, even though the group that switched to view CNN remained right-leaning in their view of the American political landscape. 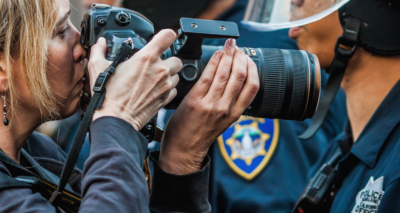 Fact-based journalism has often been called “the first draft of history.”

Though this could also appear to indicate that these viewers tended previously to watch a news source that reinforced their views, Bloomberg News reported that after that month of viewing CNN, far fewer of them believed things as strongly as they had before.

For instance: though their opinion that Biden supporters were somehow happy about police shootings, was still high at 46 percent, it did drop several points. A bit less than one in four said they support voting by mail, though this was when former President Donald Trump was constantly trying to discredit both CNN and vote by mail.

This need for breadth and depth in the news that readers receive lies behind the effort by fact-based media to assure that our reading audience sees a wide variety of information; news stories that present unbiased, fact-based news and information that doesn’t tell you what to think, but gives you things to think about.

AVV news stories are roughly 60 percent local news, around 25 percent regional and state news, and 15 percent national and international; although the ongoing Russian invasion of Ukraine and its threat to democracy has been a recent subject about which all of us should be concerned.

Bloomberg Opinion pointed out one other factor to keep in mind: “The ability of partisan media to simply ignore stories that are inconvenient is a potentially powerful challenge to democratic accountability.” This skew is also probably not experienced equally by both the left and the right: for instance, even more liberal media outlets have been upfront about reporting rising inflation, galloping home prices, mental health service gaps, and the grim COVID-19 death toll.

Featured image: Colorado news media gather on the lawn of the Chaffee County Administration Buildings to listen to Chaffee County Sheriff John Spezze do an update on a high-profile murder trial. Photo by Jan Wondra.