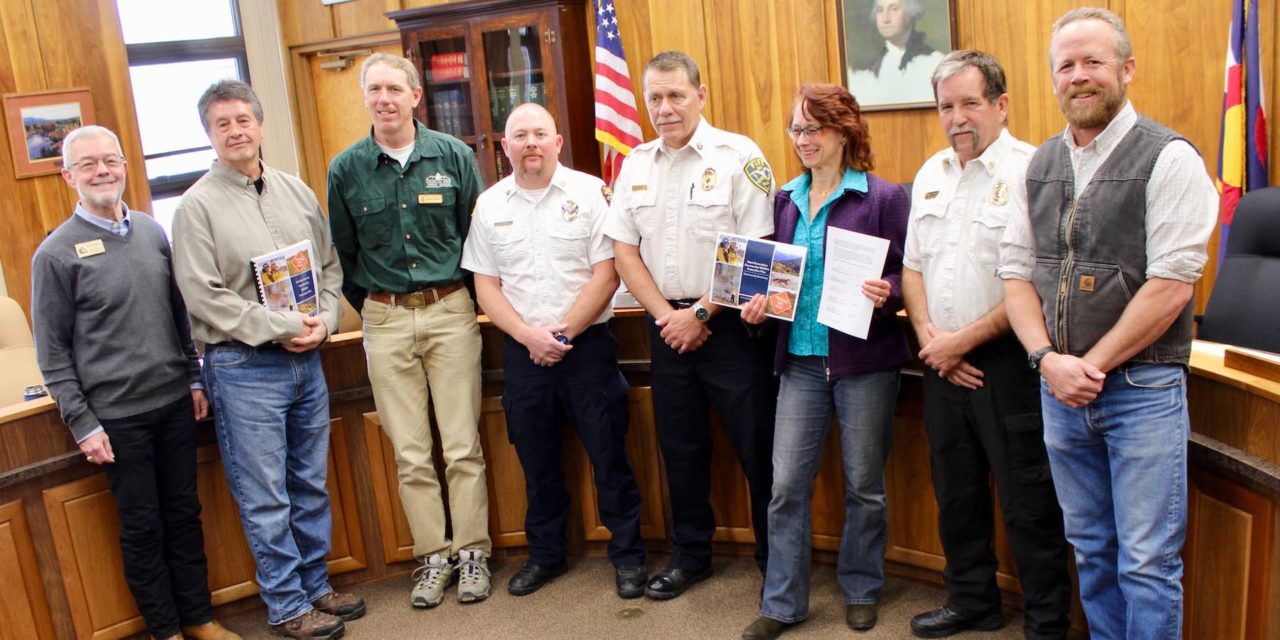 The formal ceremony was nearly 18 months in the making, but the signing of the Chaffee County Next Generation Community Wildfire Protection Plan (CWPP) today by community leaders on Tues. Feb. 4 during the regular meeting of Chaffee County Commissioners marks a new era in wildfire prevention for the county. The ten year plan aims to mitigate fire potential across 30 thousand acres of county land within the next ten years.

“This plan incorporates the latest data on fire risk and the health of our forests, said Envision Chaffee County Co-lead Cindy Williams. “It ties it with cutting edge computer modeling that has helped us understand where the risks are. We learned that if we treat five to 10 percent of our highest risk areas, we decrease the risk of wildfire by 50 to 70 percent. That is huge. We think we’re the first community in the state to do this kind of [wildfire risk] modeling … it’s an exciting day.”

The more than 200 page plan was adopted by county commissioners, local fire chiefs and the Colorado State Forest Service as the way forward to ensure what the group calls “a fire-ready future.”. The CWPP establishes long-range recommendations that protect what residents indicated they value most: firefighter lives, human lives, drinking water supply, essential infrastructure, homes, wildlife habitat and recreation assets that support the local economy.

The effort to develop the CWPP and the Geographic Information System (GIS) computer mapping was funded initially by a Colorado Department of Local Affairs (DOLA) grant with support from the Chaffee County. The genesis of the plan began with Envision Chaffee County, a community planning initiative managed by Central Colorado Conservancy in partnership with Chaffee County. From that grew the Envision Fire and Healthy Landscapes Partnership, which encompasses more than 18 public and nonprofit entities supporting a comprehensive approach. More than 1,000 Chaffee County residents have weighed in during the CWPP evolution.

“This GIS mapping work that incorporates so many community values has already led to a new way to look at forest health treatment,” said Chaffee County Commissioner Greg Felt. “We’ve really developed a new path forward that is gaining the attention of forest managers and other communities across the state.”

Chaffee County’s 10-year goal to treat up to 30,000 acres of the mapped areas by 2030 would double the past rate of treatment and reduce overall risk to the community’s assets by nearly half in a decade. This approach “treats the right acres for the highest community benefit,” said Damon Lange, Southwest Area Manager with the Colorado State Forest Service.

Protecting the county from wildfire is wise, but not cheap. The partners of the program have formed the Envision Forest Health Council to support the ten-year implementation of the plan, which they project will cost an estimated $30-$50 million. Funding will be raised through grants and state and federal sources that help communities reduce wildfire danger. 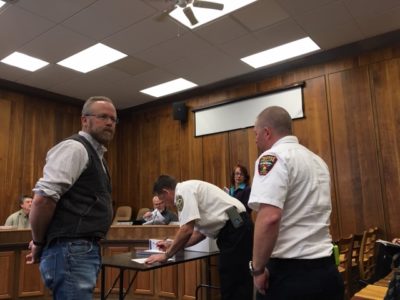 To get the program “off the ground”, Chaffee Common Ground will invest $250,000 over the next three years to translate the CWPP into on-the-ground projects such as fuel breaks, and to help residents prepare for a large wildfire. Program revenues are generated by a 0.25% sales tax increase approved by voters in 2018.

“With this strong commitment, the community can be assured that this plan is not going to be sitting on a shelf,” Felt said. “We have already begun to transition out of planning and into action.”

At the core of the plan, lies the involvement of private citizens, working together with forestry and public safety entities. As the program is put in motion, residents will be educated on how to participate; improving their defensible space, putting in place personal evacuation plans, and make their neighborhoods more fire resilient. For their part, county leadership will need to consider what county code changes need to take place to improve firefighter safety.

The approval of the CWPP also brings to light the reality that decades of full fire suppression and ensuing insect infestations have resulted in county’s forests that are in declining health, making them even more vulnerable to wildfire. Among the programs that the county envisions to involve private citizens is a new program known as Chaffee Chips, which is expected to be launched later this spring.

To view the CWPP and a summary go to centralcoloradoconservancy.org/land/envision-accomplished.