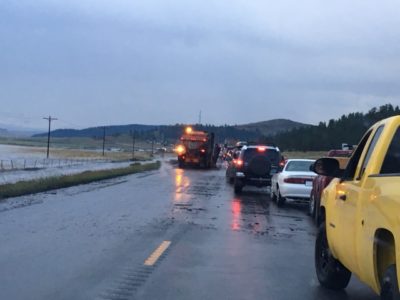 Southbound traffic on U.S. Highway 285 was stopped for an hour Monday night when a flash flood flowing down from the Weston Pass Fire burn area inundated the road (photo by Jan Wondra).

A flash flood hit South Park Monday evening, July 16, resulting from downpours in the Weston Pass burn area. Storm runoff flowed into areas just below and east of the burn, which at that point reached all the way to U.S. Highway 285. The flooding shut down the highway in both directions and backed up traffic for more than an hour.

While emergency vehicles began to divert northbound traffic at U.S. Highway 24, southbound traffic on Highway 285 backed up nearly a mile. The road reopened around 8:45 p.m. after a plow arrived to clear the road of debris.

The water flowed down from the burned timber of the Buffalo Springs area west of the highway, along both sides of Highway 285, moving toward the Platte River. The roiling waters were black with ash and burn debris, inundating fields, driveways and properties close to the highway.

Drivers and passengers of the cars and trucks caught in the closure got out and walked down the road, taking photos and getting close to the edge of the roadway, along which the water was roaring.

The flash flood occurred only two days after a termination order was issued to close a portion of the Weston Pass Fire area, the Pike National Forest, South Park Ranger District, as the area affected by fire had become smaller. Forest Service pass holders were notified Monday afternoon of the adjustment, only hours before the storm hit that caused the flooding.