In an hour-long appearance in Salida on Wednesday afternoon, Colorado Gov. John Hickenlooper clarified many audience questions. But we still don’t know the answer to the biggest question in the state: will he become a candidate in the 2020 U.S. presidential election?

During the popular governor’s wide-ranging talk, he answered questions, provided his viewpoint regarding upcoming election ballot questions, and touted the economic and social successes under his administration during the past eight years. When asked directly about the 2020 presidential election, he paused, took a deep breath and did not declare. But he did not say “no.”

Instead he said, “There will be 25 Democrats in the ring, most of them from the East Coast. I look at what Colorado has done, and it’s a lot. I look at the West and I think it’s a pretty good model for the rest of the country. My wife and I are thinking about this – we might do it. A decision would be a collaboration. What I can say is that how we approach things in the West is different – when you’re in rough water, everybody paddles.” 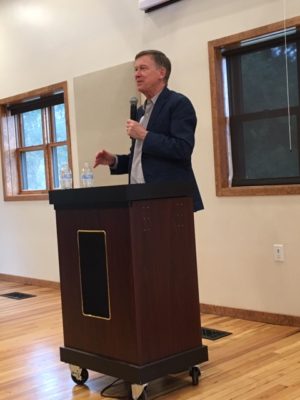 The enthusiastic crowd of around 100 applauded frequently, expressing an affection for the state’s leader that he obviously returns. “You are the heart of the Rockies here – and Colorado is at the center of economic energy. For the past two years, we’ve been number one in growth, and here in Salida you were the first Creative District and you’re still the largest in the state.”

The governor struck a collaborative tone throughout his remarks, stressing that under his watch during the past eight years the operating message has been “building unity.” He connected that sense of collaboration to the most important economic needs of the Central Mountain rural area, including broadband access.

“I set a goal that by the end of 2021 every Colorado county will have high-speed internet. We created opportunity zones and a program called ‘Jump Start,’ where new businesses were shielded from capital gains taxes for five years. We’ve worked hard on workforce housing. It’s all part of the investments we’ve made in quality of life, which is attractive to all people, no matter your age. You attract entrepreneurs by showing them that here, you can build a life.”

The governor stressed the importance of working together on whatever challenge is facing the state. “We’re the only state where the oil and gas industry has agreed to limits on methane emissions. I learned in business to never presume anyone will change their mind by telling them they’re wrong. Doesn’t happen. Validate them, listen, and you find a way forward. When I was mayor (of Denver), I said, ‘I’m going to collaborate with the suburbs.’ People told me, ‘Are you nuts?’ But people love collaboration – it’s where almost everything good happens.”

Hickenlooper was not reticent about his preferences for measures on the general election ballot. He said he strongly supports Proposition 110, the “Let’s Go Colorado” transportation funding measure that will disproportionately help fund rural transportation projects, although he said he tried to influence the proposition’s supporters to write it with a sales tax smaller than 0.62 percent. He rejects Proposition 109 as a bill that would gut the budget for things like education and healthcare because it was written without any funding mechanism.

He said he’s conflicted about proposition 112, which would change set-back requirements for new oil and gas developments within 2,500 feet of any home or school. He explained he’s heard from many people, especially rural ranchers in places like Weld County where the oil and gas leases they hold are their retirement savings. At the same time, he said, “If its defeated, oil and gas industry will see that this comes up on the ballot every two years.”

According to Hickenlooper, “There are two wolves on this ballot.” One is Proposition 109 that supports some transportation project work, but has no funding mechanism. “The second is Proposition 74. It’s a field day for trial lawyers because it opens the door for every local government to get sued about just about every decision they make for roads or county infrastructure,” he said.

Hickenlooper said he believes studies that show a changing climate will impact everyone, and he would like to see Colorado on all renewable energy by 2040, much sooner if the limitations of the Colorado Taxpayer Bill of Rights could be lifted. He added he’s proud that Colorado is the only state that has kept the cost of Medicaid flat.

Hickenlooper also supports Amendment 73, which would increase funding for education across the state. “In the state that has the number-one economy in the nation, we shouldn’t be 27th in funding in the nation; some studies say we’re 45th in education funding,” he said. “The fuel of the modern economy is education and training.”