Colorado District 5 Sen. Kerry Donovan is a Colorado native whose legislative record reveals a consistent effort to promote the needs and values of her rural constituents in Chaffee, Delta, Eagle, Gunnison, Hinsdale, Lake and Pitkin counties.

“Broadband is probably the thing that I’ve worked on the hardest over the past four years,” said Donovan, “because when you take on the telecom industry, it’s a pretty ‘David and Goliath’ fight.”

Nontheless, Donovan achieved success in her efforts to level the digital playing field for her rural constituents, securing $9.4 million in rural broadband funding through the budgeting process “almost singlehandedly,” she commented. “I proposed that amendment and secured the support for it.”

Additionally, broadband ideas that Donovan has presented during recent years were all included in 2018 legislation that will provide long-term funding for rural broadband. “Broadband is so important because it impacts tele-health, education, small businesses and emergency services,” Donovan said.

“And you guys (in Chaffee County) know more acutely than most that, if you don’t have redundancy and robustness, it impacts life safety and it impacts people’s livelihoods,” she said. “As soon as broadband goes down, someone, usually Keith Baker, let’s me know, and I’m on the phone … trying to get answers.”

Donovan has also built a strong record on health care, which “has been an ongoing challenge. … People’s health care cost is as much as their mortgage is. I just talked to a family yesterday who are going uninsured because they can’t afford it … and they have a little boy, a 4-year-old.”

Donovan discussed health care ideas she has presented that could reduce health care costs 20-30 percent, but all were defeated in the Republican-led 2018 Senate, “even the one where I had a Republican co-sponsor. … That’s absolutely politics trumping policy, which is why we’re all so disappointed in politicians.”

Nonetheless, Donovan insisted that health care will be a primary focus if she is re-elected, noting that she helped secure continued state funding for rural hospitals, “so that means we got the full federal match, and that was really important to the hospitals in my district. That is funding that they absolutely depend on to keep doors open.”

Donovan also acknowledged, “There’s lots of work to do around water,” including funding for the needs identified by “Colorado’s Water Plan.”

“Aquifer storage is a place that we should continue to explore, Chaffee County being the model for an innovative, long-term solution,” Donovan said in a nod to the Upper Arkansas Water Conservancy District’s underground storage project near Johnson Village.

So while the senator recognizes the need for additional water storage capacity, she doesn’t think building a big new dam in Colorado “is supported or wise.” She also made clear that she does not support any additional diversions of water from one river basin to another.

The senator expressed a desire to focus on values that Coloradans share across party lines, like support for public lands. “Funding for them is in serious limbo right now, and the protections that maintain them are being eroded.”

She also expressed hope that Colorado “can show that there’s a lot more common ground when you look for the shared values of your citizens,” and her Senate record supports the idea. “Especially being the only rural Democrat in the Senate, a lot of the times when I need to find solutions and people who are good allies, they’re going to have an R behind their name. …

“It’s a necessity of representing this district that, to get things done, you build bipartisan coalitions, and I’ve done that for four years.”

In spite of Donovan’s strong record of bipartisanship and working for her rural constituents, her run for re-election faces an uphill battle against a virtual avalanche of dark money from at least three different political action committees, none of which is based in the district.

Donovan observed, “It’s been a very unique election cycle where I’m running against special interests. I’m not running against my opponent because he’s not doing anything to advocate for himself. He’s just letting these dark money groups speak for him.”

Donovan noted, “One group is taking the legislative work that I’ve done and twisting it. That’s always frustrating, particularly when a lot of the legislation has come directly from the community. Chaffee is one of the counties that I’ve worked with really closely, so when they’re attacking me, they’re also attacking the community because that’s where the ideas came from.”

Another PAC opposing Donovan is Americans for Prosperity, “which is 100 percent the Koch brothers,” Donovan said. “They’re coming after me on the work I’ve done on broadband, which just seems to be entirely out of touch with the district. … I’m surprised my opponent hasn’t spoken up against that stuff.”

The other PAC opposing the senator is “a collection of entities, but they’re all related. In the past these have been the ones that have been funded by oil and gas,” Donovan said.

She also recognizes the irony of running against a candidate “purporting that he won’t be a voice from Denver when all of the mailers and funding are coming from Denver to support him. All of his campaign presence has been paid for by dark money – everything.”

Yet Donovan maintains a positive focus and message. “I think a hallmark of my time in the Senate is how closely I’ve worked with this county. … It really has been a pleasure and an honor to be able to be such a direct conduit of a voice from Chaffee to the capitol – things like writing letters of support for the schools when they apply for a BEST grant. And I don’t plan to change that habit, and that’s the only way I think you can do the job.” 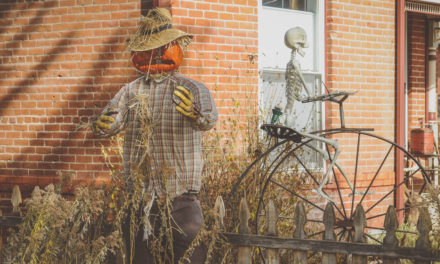 The color of pumpkins 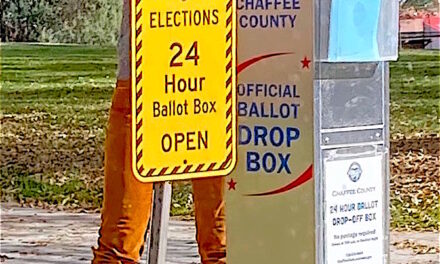