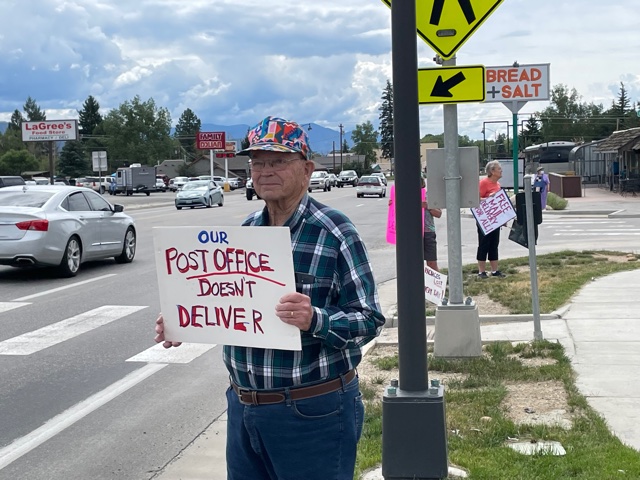 The folks standing on the corners of Brookdale and Highway 24 on Friday were clear about their beefs: A post office box in Buena Vista costs $166 a year – or more – after rates nearly doubled this year, and residents don’t have the option of residential delivery.

Counter hours have been cut back. Packages get lost or delayed, sometimes for weeks. One man had to borrow someone else’s medication because his got lost in the mail. Overnight mail sometimes isn’t overnight.

There is one story about insurance getting canceled due to multiple bills getting lost. One woman has been known to hire daycare while she stands in line. The wait at the counter – often staffed by just one employee – can run 20 people deep.

The protesters want to be clear that they aren’t taking aim at the overworked postal employees in their town. They acknowledge that the Buena Vista Post Office shares the same labor shortages seen across Chaffee County and much of the U.S.  Rather, they see larger issues with the system, which according to Mary Ann Uzelac, is probably making an enviable sum in box fees from places like Buena Vista.

The situation has gotten its share of media attention recently, with Friday’s protest drawing reporters from Denver and a story by Bruce Finley in today’s Denver Post.

Uzelac, who helped organize the protest that will also run from 11:30 a.m. to 1:30 p.m. Saturday started writing letters to U.S. Postal Service higher-ups six years ago. She said she’s seen mostly empty promises to examine and fix the problems.

She also started a Facebook group, Buena Vista Citizens For a Better Post Office, which has 371 members. She said she was surprised, but not surprised that the membership has gotten so big. “The purpose of this group is to pressure the Buena Vista Post Office to comply with regulations by supplying free post office boxes and reimbursements for rentals paid to date,” the page introduction reads.

“Originally I set it up because I thought it was unfair to have to pay for a post office box,” she explained, pointing out that some towns in Colorado have free boxes while others are seeing increasingly expensive fees. Salida’s rural residents receive free home delivery, although they too complain of lost letters and packages and an overall slowdown in mail service.

Suffice it to say, the U.S. Postal Service is struggling with a significant decrease in first-class mail, which has been its traditional moneymaker. The agency has been forced to fully fund healthcare costs for retirees, and all told it has lost more than $90 billion since 2007. The self-funding entity relies on the sale of services such as box rentals, postage and postage products.

The pandemic ushered in new stresses for the Postal Service, with people turning to shopping online for necessities resulting in significantly more package traffic, as well as urban folks relocating to small towns that in turn started to see shortages in post office boxes. The worker shortage continued to emerge.

“Currently in Buena Vista we’ve been short as much as half of our staff and our current employees are doing all they can to serve our customers,” James Boxrud, Strategic Communications Specialist for the Western Area of the USPS wrote in a response to AVV.  “We know we have not met service expectations of the community and are working hard to restore the respect of the public.”

Boxrud noted that USPS has open positions throughout most of Colorado. He also said that USPS is currently evaluating criteria for Buena Vista box holders “that take into account local laws, physical barriers, access to rural delivery, etc., and reviewing who is eligible for no-fee post office boxes.

“We are very close to a resolution,” he said.

“The people within the town limits traditionally have received their mail at the Post Office Box,” he wrote. “In fact, the majority of Colorado’s towns do not have city delivery and the Post Office Box or General Delivery is how mail is received.  To illustrate that fact, in the 80-mile radius from Buena Vista there are only four other towns that have either city or rural delivery: Vail, Aspen, Leadville and Salida.”

Boxrud also said that while the USPS is generally not subsidized by tax dollars, it has seen multiple changes in the cost of doing business, including fuel, transportation, and health care benefits – “all of which have continued to increase.” He said that pricing takes into consideration the prices charged by local competitors for comparable services as well as consumer demand.

Buena Vista’s case involves a 1997 survey among local customers, who are said to have declined home delivery in town. According to locals who have researched the situation, there was no mention of fees in the survey. Some people say residents voted in favor of home delivery, but these days that survey appears hard to find.

Chuck Dorsey, who splits his time between Buena Vista and Arizona, stood next to the highway to protest what he has experienced as nonsense and a lot of frustration. “I’ve stood in line 12 times with six to 12 people in front of me to ask them, for two months, to stop forwarding my mail to my other address,” he said, noting that he’d just received a June 10 newspaper.

Mary Gulash, who waved a pink neon sign at traffic, had a more succinct observation: “Service sucks and we have to pay for it,” she said.