More than 100,000 acres burning across Colorado; Wildfire Fighting Crews In for Long Battles 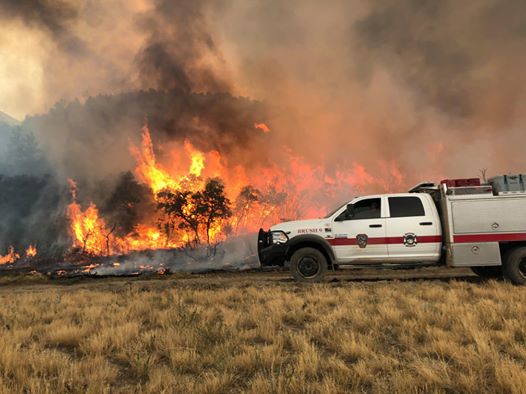 Firefighters from across Colorado, as well as firefighting units from around the United States are fighting four major fires across Colorado; an area now larger than the entire Denver metro area. As the state continues to dry out at alarming rates, and with beetle kill creating standing fuels, the danger of wildfire is going up by the hour.

Metro area residents are reporting not just smoke, but ash falling on cars and sidewalks in Denver, as prevailing winds carry smoke and ash straight east.

The largest wildfire, the Pine Gulch, has grown to more than 70,000 acres, making it the fourth largest (so far) in state history. The Grizzly Creek Fire in Glenwood Canyon has been declared the highest priority fire in the country. It crossed over from Garfield County into Eagle County on Friday. As reported earlier last week, it has touched the interstate highway in several spots, closing Interstate 70, the state’s main east-west artery. Firefighters have managed to keep one lane open to move emergency vehicles.

Unofficial reports say the Grizzly Creek Fire could have been sparked by a popping tire, or dragging car chains. It has now forced the evacuation of several communities around Glenwood Springs and overnight grew to more than 26,000 acres. The town of Dotsero is on pre-evacuation orders as of Sunday morning

On Friday morning, Gov. Jared Polis said he was optimistic that Interstate 70 would be able to reopen in two to three days. Polis traveled to Eagle County to review progress on fighting the fire with the fire’s incident command. Having just experienced last fall’s Decker Fire, Chaffee County residents will be able to appreciate the incident command set up at the Eagle County Fairgrounds and the great concern in the communities surrounding Glenwood Springs.

“Literally the fire is right on I-70,” Polis said, speaking to Vail Daily. “They’re doing their best and so far they have been successful in having one lane open for emergency access of fire vehicles and firefighting supplies and personnel. But literally the flames are right on the edge of the highway. The best realistic case would be two to three days. But it’s really a question of when it’s no longer right on the highway. I want people to know this is a closure for the reason that literally the fire is right on highway 70 in several places.”

As crews continue to battle the Grizzly Creek Fire, I-70 remains closed as of Sunday morning, Aug. 16. 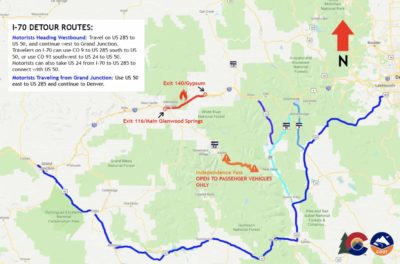 CDOT detours from fires burning across Colorado. The Grizzly Creek Fire has shut down I-70 in Glenwood Canyon.

With continued detours as a result of the Grizzly Fire burning in Glenwood Canyon on both sides of Interstate 70, state transportation officials decided Friday to reopen Independence Pass on a limited basis. Their goal,  to open up a route through the middle of the state. Currently traffic is being routed north toward Kremmling, and south on U.S. 24 and U.S. 285 to U.S. 50 in Poncha Springs. But travelers unaccustomed to two-lane roads have caused multiple accidents, and the roads have become loaded with trailers and recreational vehicles, as well as semi-trucks.

Officials emphasized that the reopening will not be the free-for-all mayhem and gridlock seen earlier this week. This could result in two-to-three hours of delays as transportation workers only allow one group of cars through at a time.

“Anyone who thinks this is going to cut off any time going to Denver is probably mistaken,” Pitkin County Sheriff Joe DiSalvo said Friday afternoon. “This isn’t going to cut any time off.”

In an evening update on Facebook live Saturday, Williams Fork Incident Commander Ed LeBlanc said that the fire burning in the Williams Fork drainage, is an extremely difficult situation. Firefighters have not been able to get into that area due to safety concerns.

“This is an extremely difficult area to fight fires in with all the fuel loading up in this drainage,” said LeBlanc.