The Salida Circus will be hosting a weekend-long performance extravaganza in honor of World Circus Day on April 20. A Friday night April 19 performance at A Church in Salida will feature performers from Red Noses Palestine, who as part of an international organization of “clown doctors” offer aid, comfort and laughs to patients in Palestinian hospitals. Red Noses Palestine will be visiting Chaffee County for a full week, and in addition to public performances in Salida and Buena Vista will be offering a workshop on “Humor in Health Care” to the staff at Heart of the Rockies Medical Center.

The Friday night show will feature other international performers as well: Jirka Grygar and Ramadan Yigit, respectively the national juggling champion from the Czech Republic, and a Kurdish clown from Turkey, who have been interns this year with Salida Circus. Jessie Miller, a former Salida Circus aerial performer now based in the United Kingdom, will also make an appearance, as well as local Salida Circus stars “Magic Steve” Kucera and Joe Lobeck, among others. Music by Big Horn will follow the show. Ticket prices will be $15 for adults and $10 for children 12 and under. 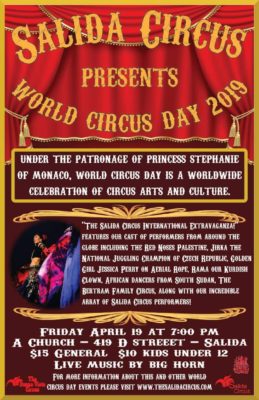 Festivities will kick off at 11 a.m. Saturday, April 20, with an Easter Egg Hunt in Alpine Park, followed by performances and workshops in juggling, belly-dancing, tumbling and other circus skills led by local and international performers. A Circus Parade at 3 p.m. will be led by a Salida Middle School drum corps formed by local teacher and musician George Mossman will go from F Street to A Church on the corner of D and 4th Streets, where Joan Lobeck will be putting on an interactive children’s show, “Circus in Space.” Ticket prices for this show will be $5.

Salida Circus founder Jennifer Dempsey urges all interested spectators and potential performers to come down and get involved, even if they have never juggled, tumbled or clowned around before, “It’s never too late and you’re never too old to join Salida Circus!”