Thinking Security: In the Land of the Blind, the One Eyed Man is King 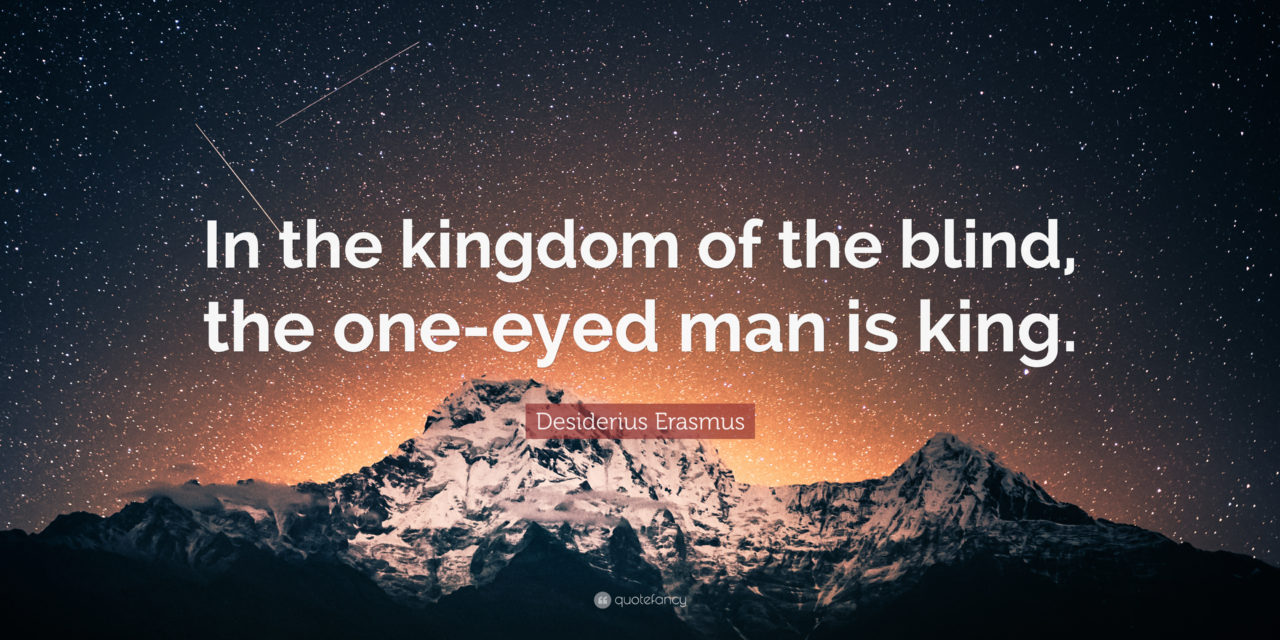 Russia’s ongoing undeclared war against the U.S. is being carried out via active measures and an information warfare campaign.

The New York Times has reported, with corroborating reporting in The Washington Post, and The Daily Beast that:

“Intelligence officials warned House lawmakers last week that Russia was interfering in the 2020 campaign to try to get President Trump re-elected, five people familiar with the matter said”

“U.S. officials have told Sen. Bernie Sanders that Russia is attempting to help his presidential campaign as part of an effort to interfere with the Democratic contest, according to people familiar with the matter.

President Trump and lawmakers on Capitol Hill have also been informed about the Russian assistance to the Vermont senator, according to people familiar with the matter, who spoke on condition of anonymity to discuss sensitive intelligence.

It is not clear what form that Russian assistance has taken. U.S. prosecutors found a Russian effort in 2016 to use social media to boost Sanders campaign against Hillary Clinton, part of a broader effort to hurt Clinton, sow dissension in the American electorate and ultimately help elect Donald Trump.”

This reporting is one of the most recent intelligence assessments of Russia’s ongoing undeclared war against the U.S. being carried out via an active measures and information warfare campaign. It also reconfirms what we have known since 2016: specifically that Vladimir Putin is attacking the U.S. using all elements of Russian national power (with the exception of direct military power) in an attempt to inflame existing political, social, religious, ethnic, and economic divisions among Americans, in order to weaken the U.S. and subvert the U.S.-created and backed international system that has been in place since the end of World War II.

So — we know what Russia did, has been doing, and is continuing to do. But what is the U.S. doing in response?

The U.S., specifically the President and his senior administration officials, are purging the President’s own political appointees in the Intelligence Community who are telling him and the appropriate members of Congress what they need to know. They are not telling him what he wants to hear, so he is replacing them with political loyalists.

The soon to be former Acting Director of National Intelligence, Vice Admiral Maguire, did what his job required him to do. He informed the House Permanent Select Committee on Intelligence (HPSCI) and then President Donald Trump, that Russia was continuing to interfere in U.S. politics, specifically within the 2020 election; to achieve the effect of both elevating Senator Sanders candidacy for the Democratic nomination and the reelection of the president. The strategic objective behind this effect: to cause sociopolitical chaos within the United States that weakens us as a global power allowing Russia to act with impunity.

I understand the President’s desire to have his key personnel and their deputies be reliable agents in regard to his policies, strategies, and agenda. This is why we staff the most senior levels of the executive branch with political appointees. And I also understand the president’s distaste for being told (reminded?) that Russia interfered in the 2016 election because they wanted to see him elected. That unfortunate reality would be hard for anyone’s ego to bear.

However, cleaning house of anyone and everyone who is going to tell him what he needs to know, whose role includes ensuring that the appropriate members of Congress are given the same information, is not going to strengthen his administration or the United States.

The consensus of the U.S. Intelligence Community is that Russia is still interfering in American politics and that Putin is doing so to reelect the president because that suits Putin’s goals and objectives, not the president’s and not that of the United States. Had Maguire briefed the President first and then the HPSCI second, it would have opened up the President to accusations of trying to fix the intelligence, because he was aware that Putin is actively trying to get him reelected.

The purpose of intelligence is to provide decision makers with the most accurate, timely, and usable information in a digestible format so that those decision makers can make the best informed decisions possible. The President has the right to pick his team, but if they are being chosen to tell him what he wants to hear, not what he needs to know, then the President is purposefully blinding himself, which weakens him as the President, his administration, and the United States.